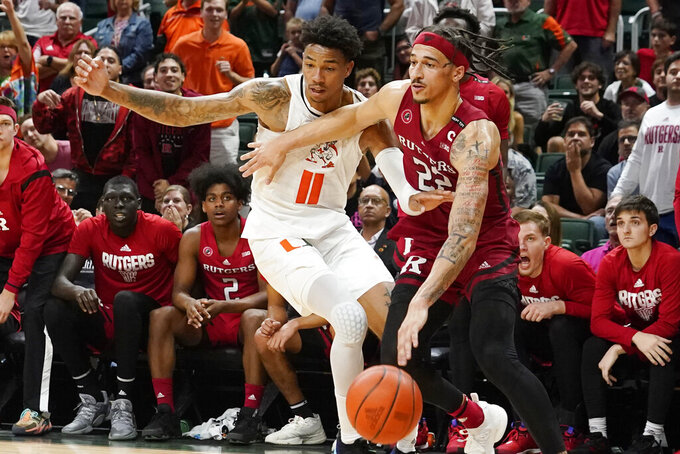 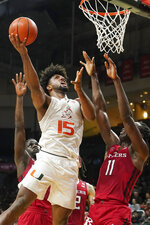 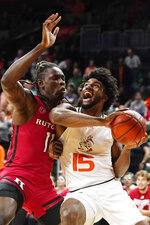 The Hurricanes (7-1) trailed by as many as 11 in the second half but found their shooting eye to pull out the game as the Scarlet Knights (5-2) missed two critical layups in the last might.

Rutgers, which leads the nation in 3-point defense did its job in the first half, limiting Miami to 1 of 9 behind the arc, but the Hurricanes were 5 of 9 in the second half. Two came back-to-back, by Nigel Pack and Miller, following layups by Bensley Joseph. The 10-point run had Miami up 59-56 with 5:11 to play.

Rutgers tied the game at 61 on a 3 by Caleb McConnell with 2:45 to play. Both teams missed opportunities before Omier had an inside basket at 1:22. It was after that the Scarlet Knights missed the first layup and Pack, who was just 3-of-12 shooting, swished a rhythm 3 from the top of the key with 23.6 seconds remaining for a 66-61 lead.

Another missed layup allowed Joseph to finish it at the foul line with 8.1 seconds to play.

Isaiah Wong scored 16 points for Miami, which is 8-1 over the last eight years of the challenge, the best of any school. However, the loss was at home to Rutgers in 2018.

Clifford Omoruyi and McConnell both had 16 for Rutgers (6-1), who had won two straight but fell to 4-5 in the challenge

Miami shot 50% in the first half but trailed 34-33 at the break as the Scarlet Knights made 5 of 9 3-pointers. Neither team led by more than five points and McConnell put Rutgers on top with a three-point play 48 seconds before halftime.

Omoruyi opened hte second half with a three-point play and had two dunks as Rutgers scored the first nine to lead by 10. After an Omier layup, Omoruyi had a 3-pointer for that 11-point lead. But after a jumper by Mawot Mag had the Scarlet Knights on top 56-59 with 8:24 remaining, they missed eight straight shots and went 2 of 14 the rest of the way.

Miami, which opens ACC play at home Sunday against Louisville, made seven of its last nine shots.

Rutgers is home against Indiana on Saturday in its first Big Ten game.