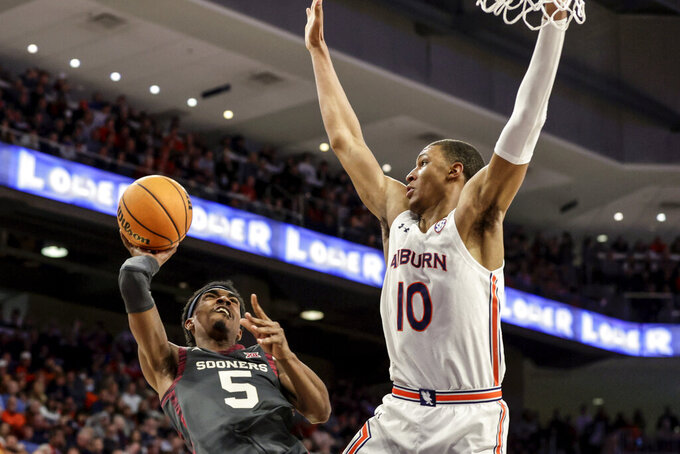 Kansas’ Bill Self is looking for a strong response after a lopsided home loss, while Texas’ Chris Beard is preparing to face the program he led to within a win of a national championship just three years ago.

That’s part of a Big 12 schedule that sees each of the league’s five AP Top 25 teams face at least one ranked opponent this week.

The 10th-ranked Jayhawks are coming off an 18-point home loss to now-No. 5 Kentucky and are battling through numerous injuries, including starters David McCormack and Remy Martin. The Jayhawks visit No. 20 Iowa State on Tuesday night, then host eighth-ranked and reigning national champion Baylor on Saturday.

Martin, who averaged 19 points in the past two seasons at Arizona State, is battling through a lingering knee injury. Self told reporters Monday that the guard is at “probably 60 or 70%.”

Additionally, freshman guard Bobby Pettiford is still limited and after returning from missing a month with an abdominal injury. McCormack, who had offseason surgery on a broken bone in his foot, has been dealing with soreness. And Self said freshman forward Zach Clemence is probably at least a week from returning from a toe injury that has sidelined him since Jan. 8.

That’s part of why Self hopes Kansas (17-3, 6-1 Big 12) does more in the “scrap department” with energy and effort plays to offset some of those concerns, particularly with the conference race open regardless of the Kentucky disappointment.

“We missed an opportunity, there’s no question, to play better,” Self said. “But we haven’t missed out on an opportunity to still do what we set out to do” in the league.

As for the Longhorns (16-5, 5-3), they visit No. 14 Texas Tech on Tuesday in Beard’s first trip back to the Red Raiders program he led as head coach for the previous five seasons. It’s the first of two games this week against ranked opponents, the second coming Saturday at home against the Cyclones.

“Very appreciative of my 15 years there,” Beard said Sunday, adding: “I thought together we did build an undeniable homecourt advantage, and I look forward to playing in that environment.”

Two sets of Wildcats – No. 7 Arizona and No. 12 Villanova – each gave their own doubleheader against ranked opponents this week, too.

Auburn held firmly to its grip on the program’s first No. 1 ranking in Monday’s poll, staying ahead of Gonzaga for the second straight week.

The Tigers (20-1, 8-0 Southeastern Conference) have won 17 straight games since losing in double-overtime to UConn in Novermber during the Battle 4 Atlantis. They next face instate rival Alabama on Tuesday, followed by visiting Georgia on Saturday.

The Big Ten, which also has five ranked teams to tie the Big 12 and Big East for the national lead, has one ranked-vs-ranked matchup with No. 11 Wisconsin (17-3, 8-2) visiting No. 18 Illinois on Wednesday. The Fighting Illini (15-5, 8-2) jumped six spots in Monday’s new poll, second only to Kentucky’s seven-spot jump to No. 5 after the Kansas win.

Retiring Hall of Fame Duke coach Mike Krzyzewski makes his final trip Saturday to rival North Carolina, with the ninth-ranked Blue Devils (17-3, 7-2 Atlantic Coast Conference) aiming to earn only their second win in Chapel Hill in the past six tries.

The Tar Heels, playing under first-year coach Hubert Davis, are unranked for the fifth straight meeting with the Blue Devils dating to the 2019-20 season. And last year, neither team was ranked for either meeting in an unusual year for the storied rivalry.

Alabama (14-7, 4-4) led the list of vote-getters among unranked teams. The Crimson Tide is coming off an upset of Baylor and has two marquee SEC games this week to earn their way back into the poll. After Tuesday’s game against No. 1 Auburn, Alabama hosts Kentucky on Saturday.

Murray State (20-2, 10-0) is rolling through the Ohio Valley Conference and hasn’t lost since falling to Auburn on Dec. 22. The Racers visit Austin Peay on Thursday, then host SIU Edwardsville on Saturday.