No. 13 Maryland off to fast start with marquee games ahead 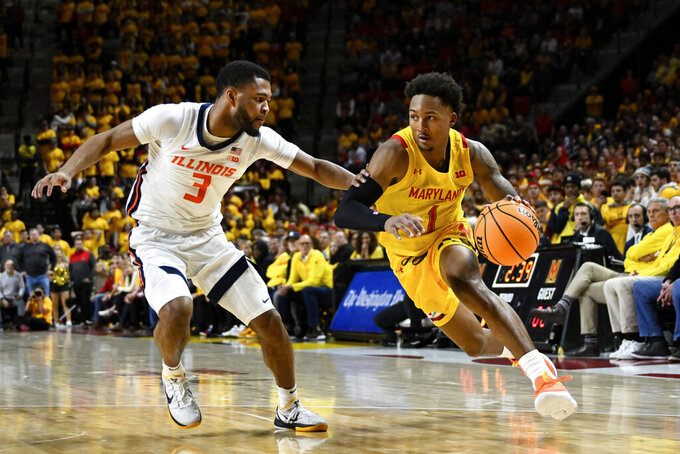 Kevin Willard believed his new Maryland team would get off to a good start.

But this has been a bit more than even Willard expected early in his tenure after a successful run at Seton Hall.

The Terrapins (8-0, 1-0 Big Ten) made the week's biggest jump in Monday’s latest AP Top 25 by rising nine spots to No. 13. That marks the program’s highest ranking since pushing into the top 10 during the 2019-20 season, and it comes with the Terps preparing for a stretch that could build even more momentum.

First comes Tuesday’s trip to Wisconsin in Big Ten play, followed by a matchup with seventh-ranked Tennessee in New York on Sunday in one of the marquee games on this week’s Top 25 schedule.

After this week, the Terrapins have another test ahead by hosting No. 19 UCLA.

“We still have a long way to go obviously,” Willard said after the Illinois win. “But I think everyone got a glimpse of how hard these guys have worked, the attitude they’ve had and what this program is not only about now, but what it’s going to be about in the future. So it’s really cool to be 8-0.”

Houston remained firmly in place at No. 1 in the latest AP Top 25 poll. The Cougars are set for two straight weekends of big tests, starting Saturday against No. 8 Alabama at home.

Houston (8-0) is No. 2 nationally in KenPom’s adjusted defensive efficiency (83.9) while ranking in the top 20 in offense. The Cougars first host North Florida on Tuesday before facing the Crimson Tide, who cracked the top 10 for the first time this season Monday.

If the Cougars win those, their first stay at No. 1 since the “Phi Slama Jama” days in the 1980s could be a lengthy one.

There are two other matchups of AP Top 25 teams on the schedule this week. The first comes Tuesday when No. 2 Texas — which already has wins against No. 18 Gonzaga and No. 21 Creighton — meets No. 17 Illinois in New York for the Jimmy V Classic.

The other comes Saturday when No. 10 Arizona meets No. 14 Indiana in Las Vegas on Saturday.

North Carolina started the year at No. 1. The Tar Heels start this week as only the sixth team to go from that preseason top spot to unranked since at least the 1961-62 season.

UNC (5-4) has lost four straight and has a hobbled big man in Armando Bacot, who was the double-double machine at the heart of last year’s unexpected run to the NCAA championship game. The good news for the Tar Heels is they have multiple days to regroup before hosting Georgia Tech on Saturday in Atlantic Coast Conference play.

The Hawkeyes, the leading vote-getter among unranked teams in Monday’s latest poll, face No. 15 Duke in New York during the Jimmy V Classic on Tuesday. They spent one week at No. 25 in mid-November in the poll.

The second-leading vote-getter among unranked teams was College of Charleston (8-1), which visits Presbyterian on Tuesday and hosts North Greenville on Sunday.