No. 19 Texas Tech taking down top 10s with senior transfers 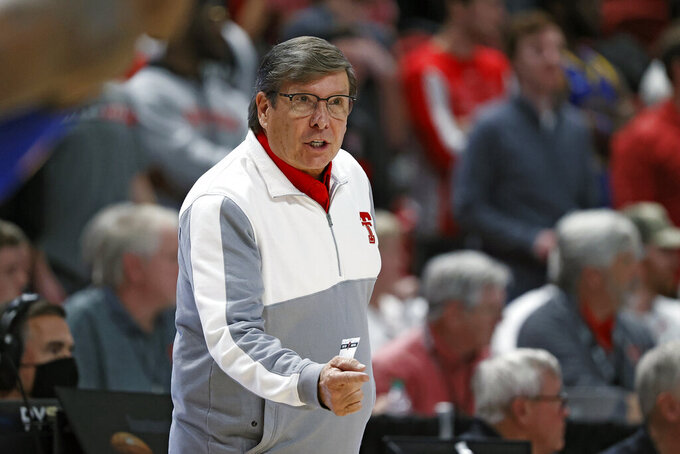 Texas Tech coach Mark Adams yells out to his team during the first half of an NCAA college basketball game against Kansas, Saturday, Jan. 8, 2022, in Lubbock, Texas. (AP Photo/Brad Tollefson)

Together at Texas Tech, with first-year head coach Mark Adams and a handful of returners, they have helped the 19th-ranked Red Raiders take down consecutive top 10 opponents in the Big 12.

Adams described the transfers as older, veteran players with chips on their shoulders who want to prove themselves.

Arms, who played at Winthrop last year after two junior college seasons and a stop at Division II Northwest Nazarene, had team highs with 14 points, nine rebounds and five assists against Baylor. There was also a highlight dunk late, with a spin move around big man Jonathan Tchamwa Tchatchoua for a powerful one-handed slam as the Red Raiders (12-3, 2-1 Big 12) held on late.

“That was nasty,” Kevin McCullar, one of Tech's returning players, said admirably.

Texas Tech is home Thursday night against Oklahoma State in the makeup of a game postponed Jan. 1 because of COVID-19 protocols, then goes to Kansas State on Saturday. That will wrap up five Big 12 games in an 11-day span that began with an 51-47 loss at then-No. 11 Iowa State when the four transfers were among only seven players available for the game.

Baylor led 9-0 after only 85 seconds, and had a 31-16 lead with 6:12 left in the first half before Tech then went on a 17-2 run interrupted by halftime. The Red Raiders tied the game for the first time on a three-point play by Williams that made it 33-all. The game was tied at 46 when McCullar had a steal and made a nifty bounce pass to Obanor, a three-year starter at Oral Roberts who had a slam for the last of his 13 points.

Williams, who played 65 games in two seasons at Fresno State and 56 more games the past two years at UTEP before getting to Tech, had the go-ahead 3-pointer with 4:52 left and finished with 13 points against Baylor.

Williams had 22 points and eight rebounds in the 75-67 win over the Jayhawks, when Tech was without McCullar (ankle) and leading scorer Terrence Shannon, who has now missed six games in a row with a back issue.

Warren, who went to junior college before the past two seasons at Hampton, made two free throws with 22 seconds against Baylor for a three-point lead. The Bears, the defending national champions and last unbeaten Division I team, missed a 3-pointer at the buzzer to tie the game.

“For sure one of my biggest wins here at Tech,” said McCullar, a junior in his fourth year in the program. “Glad to do it with these guys and coach Adams.”

McCullar is the only player remaining from Tech's NCAA Final Four run, though he was redshirting when the Red Raiders made it to the national championship game three years ago. He is one of five players back since Chris Beard left at the end of last season to become head coach at Texas.

Adams, a Tech alumnus, had been Beard's top assistant before getting his dream job.

Shannon also opted to return after considering early entry in the NBA draft, but leading scorer and All-Big 12 guard Mac McClung left early for the pros, third-leading scorer Kyler Edwards transferred to Houston and Micah Peavy, a starting guard as a freshman, went to TCU.

“I think we’ve grown up a lot,” Adams said after the Kansas game. “There’s a toughness about us that we may not have a few weeks ago or even when we played Gonzaga and Providence. These guys didn’t quit."