No. 2 Baylor cruises to 99-42 victory over Ark-Pine Bluff 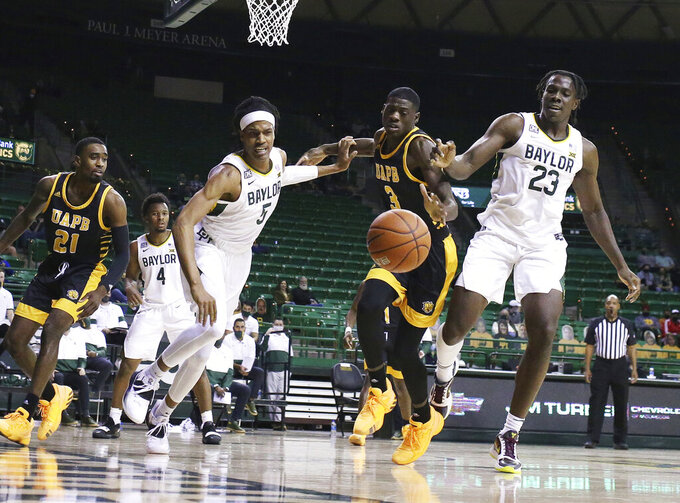 WACO, Texas (AP) — LJ Cryer and No. 2 Baylor set the tempo in a hurry and go into their Christmas break as the only Big 12 team without a loss.

The Bears quickly jumped out to a double-digit lead, had only five turnovers all night and controlled in every aspect while cruising to a 99-42 win over Arkansas-Pine Bluff on Monday night.

“It means a lot, especially when all the guys to the last person on the bench get to play,” Cryer said. “I just feel like it’s a great Christmas present to all of us, especially the coaches who get to go home with a win.”

The Bears (6-0) have scored at least 80 points in every game — the first time since 1994 to reach that mark in six consecutive games.

“This is a game always before Christmas you want to make sure your guys haven’t mentally left, and I thought the upper classmen made sure we were locked in and ready from the jump,” coach Scott Drew said. “This is a team, they like to control tempo, and if you’re not on point, then you’re in for a long game. So us getting separation made them played faster, which obviously favored us.”

Butler scored the game’s first two baskets, and was one of six Bears to score in a 19-2 run in the opening 7:18 of the game.

Baylor also had a 20-0 run before halftime, with Davion Mitchell’s layup making it 39-4 with 5:01 left. Doss finally ended that slide with a 3-pointer that came nearly 8 minutes after his jumper that was the previous basket for the Golden Lions, who shot 28.3% (15 of 53).

It was Baylor's fifth win by at least 30 points. The Bears outscored Arkansas-Pine Bluff's bench 55-0, along with a 23-2 margin in fastbreak points. The Bears had 25 assists on their 37 field goals, and converted 23 Pine Bluff turnovers into 28 points.

Baylor senior forward Mark Vital didn't return after leaving with just under five minutes left in the first half and a 39-4 lead. He had a bruise on his lower left leg. Drew said he could have played more, but it was better to rest him to make sure he is good coming out of the break.

HOME FOR THE HOLIDAY

Drew said it was critical for the players to get a chance to go home after the sacrifices they have made not seeing family and friends since returning to campus in July.

“I know they love playing basketball, they’re excited about how we’re playing. But at the same time a lot them are really excited to go home and get some home cooking and see family,” Drew said. “They’ll do a good job, they’ve been well-trained by our trainer and our medical staff on what to do and what not to do, and hopefully we can all come back safe.”

Ark.-Pine Bluff: Even with four returning starters, this season has been a struggle for the Golden Lions. Their only win was by one point over Arkansas State, and their seven losses were by an average margin of 32 points before getting blown out by Baylor. They had 15 turnovers by halftime, when they trailed 55-12.

Baylor: Two days earlier, the Bears won their Big 12 opener 100-69 at Kansas State in their first game in 10 days because of a pause for COVID-19 issues. Arkansas-Pine Bluff was listed as the ninth game on Baylor's schedule released in late October. It instead was only the third game the Bears have actually played as listed on that initial schedule. They have also added a nonconference game Dec. 30 against Alcorn State, another SWAC team, and will play back-to-back days after their break.