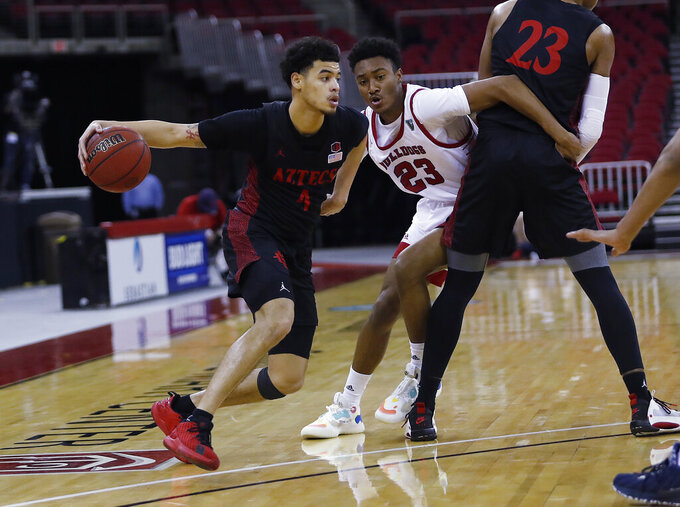 FRESNO, Calif. (AP) — Matt Mitchell scored 19 points and Trey Pulliam matched his career high with 18 for No. 25 San Diego State, which used a 19-0 run to take control in the first half and beat beat Fresno State 67-53 Thursday night for its seventh straight win.

Jordan Schakel had 13 for the Aztecs (16-4, 10-3 Mountain West), who recovered from a ragged start and an 11-0 deficit by clamping down on defense and forcing Fresno State to go cold for eight minutes.

The 14-point margin was the narrowest in the win streak by SDSU. Four of the Aztecs' previous six wins had been by at least 30 points.

San Diego State missed its first six shots and allowed Fresno State to take an 11-0 lead, including getting two 3-pointers from Hill.

The Bulldogs then went cold for eight minutes and SDSU took off on a 19-0 run. The Aztecs took the lead for good at 13-11 on Mitchell's steal and layup 10:22 into the game. They ran the lead to 19-11 on Terrell Gomez's jumper before Fresno State finally broke its drought with a jumper by Christian Gray with 7:34 to go.

Pulliam scored 12 points in the second half, including two 3-pointers in the first few minutes.

SDSU: The Aztecs were back in The Associated Press Top 25 for the first time in two months. It took them a few minutes to look like a ranked team, and then keyed their comeback with clampdown defense.