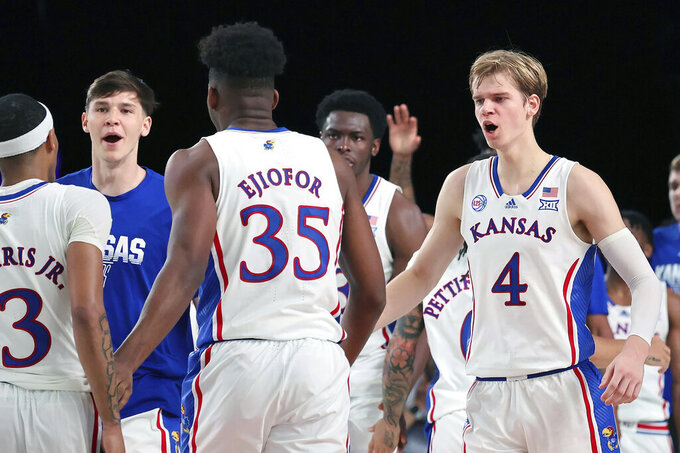 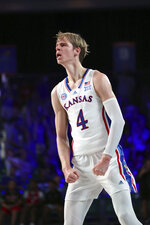 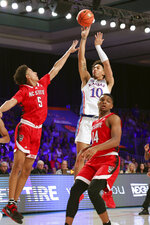 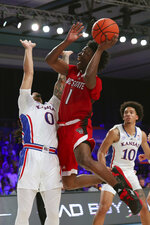 PARADISE ISLAND, Bahamas (AP) — Bill Self couldn't wait to get started Wednesday at the Battle 4 Atlantis. Neither could hot-shooting Kansas rookie Gradey Dick.

Dick scored a season-high 25 points to help the third-ranked Jayhawks beat North Carolina State 80-74 in Wednesday’s tournament opener, giving Self a successful return to the bench after a four-game suspension.

Dick had 18 on six 3-pointers in the first half before going 1 for 8 from the field after halftime. Jalen Wilson added 19 points and 11 rebounds for the reigning national champion Jayhawks (5-0), who blew an eight-point halftime lead and a nine-point second-half lead before grinding it out.

“I think it really just showed what our team's about and in crunch time, we can come out with tough plays when we really need it,” Dick said.

It also helped, Dick said, to “have a Hall of Famer in our corner" again.

Kansas had imposed the suspension on Self and assistant Kurtis Townsend as part of the fallout from a pending NCAA infractions case tied to the federal investigation into corruption within the sport.

Self was allowed to coach practices, so he remained involved with the team. But on gamedays, he said he got a dose of the helpless perspective of a fan while assistant Norm Roberts led the team. He said he couldn't even take notes until he watched the game on a replay.

He was ready for Wednesday right from the 7 a.m. wake-up call.

“I usually don't jump out of bed,” Self said, “but I kind of did today because I was excited about what was getting ready to happen.”

As he emerged from the tunnel, Self was greeted with loud cheers from a boisterous Kansas fan section. He had a slight smile as one fan dangled a Jayhawks national title banner as he walked by and gave light high-fives to a line of about a half-dozen fans who had extended their arms over their railing.

This was N.C. State’s first appearance at Atlantis since 2017 at the start of Kevin Keatts’ coaching tenure. That team opened by beating No. 2 Arizona and this year’s bunch gave Kansas fits all the way to the final minutes.

N.C. State: The Wolfpack program had also been caught up in the FBI investigation of the sport involving recruiting violations tied to one-and-done freshman Dennis Smith Jr. under former coach Mark Gottfried. That case had hung over the entirety of Keatts' tenure until there was a December resolution. Now Keatts has restocked his roster with a style closer to his vision: playing fast and picking up fullcourt even against a marquee-name program.

“I don't know from a raw speed standpoint if there's anybody that we'll play against that is as quick as" the backcourt of Smith and Jarkel Joiner, Self said, adding: “We're athletic, pretty athletic — but we're not jet quick. So we had to be turned up pretty good to stay in front of them.”

Kansas: The 6-foot-8 Dick is off to a strong start. He came in averaging 16.8 points while shooting 10 of 20 from 3-point range, then surpassed his (short) season high of 23 points from the opener against Omaha.

Dick's sixth 3-pointer for a 39-31 lead came before the halftime horn and through light contact from Morsell, with Dick falling to the floor. He got up with an emphatic shout, clapping, while Morsell could only respond with a frustrated shrug.

But N.C. State answered with an 8-0 burst, with Morsell hitting a 3 on the break and another on a stepback to tie it.

The Wolfpack never led after halftime but tied it five times, the last at 63-all on Jack Clark’s jumper with 7:14 left.

N.C. State: The Wolfpack will face Dayton, which lost to Wisconsin, in Thursday’s consolation bracket.

Kansas: The Jayhawks advanced to Thursday’s semifinals to face Wisconsin.