No. 3 Villanova edges Seton Hall in return from 27-day break 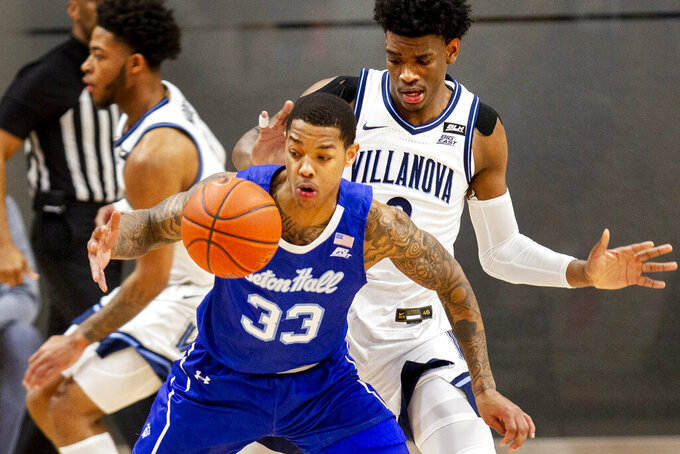 VILLANOVA, Pa. (AP) — Stuck in medical isolation, Villanova filled its schedule with YouTube videos, FaceTime calls and video games to stay connected. The Wildcats had to create their own entertainment with basketball on pause.

“It’s hard when you’re in a hotel room watching everybody else play,” guard Collin Gillespie said.

With a lengthy layoff over, the Wildcats could finally enjoy their own highlight reel.

Cole Swider hit the winning free throw with 1.9 seconds left and Gillespie scored 22 points to help No. 3 Villanova win its first game in 27 days, 76-74 over Seton Hall on Tuesday night.

The Wildcats (9-1, 4-0 Big East) held steady in the Top 25 as their schedule crumbled because of COVID-related issues. Two-time national championship coach Jay Wright tested positive around Christmas, and the Wildcats paused their season as more players tested positive.

They were cleared to practice on Jan. 3, only for another series of positive tests to arrive the following day. The Wildcats weren’t allowed to practice again until last week and got the roster cleared on Monday.

Villanova had four games postponed since it beat Marquette on Dec. 23.

“A lot of working out by ourselves,” Gillespie said.

Once the final players were cleared, it was back to work — and back in the win column — for the Wildcats.

“Being with the team was really enjoyable,” Wright said. “We’re really grateful just to be able to be playing. We would have been upset after a loss, but not as upset as you normally are after a loss.”

Swider took care of that. He missed his first free throw but made the second to give Villanova a 75-74 lead.

Seton Hall’s last-gasp desperation pass was bobbled out of bounds by Sandro Mamukelashvili. The 6-foot-11 Mamukelashvili had an open look and could have dunked home the go-ahead bucket with a clean catch.

Jermaine Samuels scored 20 points a day after he was medically cleared for Villanova.

The Pirates (9-6, 6-3) came out 3-point happy to make it a game early and Mamukelashvili and Jared Rhoden made it a two-person show in the second half. Mamukelashvili scored 23 points and Rhoden had 19.

Gillespie was fouled on his drive to the basket and made both free throws with 1:09 left for a 74-72 lead. Takal Molson tied it at 74 and Villanova had a shot to go ahead with 45.4 seconds left.

Gillespie missed a 3 and Shavar Reynolds grabbed the defensive board to set up a late look for Seton Hall. Reynolds missed a 3 and Swider was fouled as a pile of bodies went up for the rebound. He made up for the first miss by hitting the tiebreaker.

Following the turnover by Mamukelashvili, another free throw by Jeremiah Robinson-Earl for Villanova with a second to go made it 76-74.

The Wildcats never looked out of practice in a torrid start from 3-point range that’s been a recipe for burying Big East teams early in their decade-plus run of conference dominance.

The Pirates, who had a Jan. 16 game against Xavier postponed, came to play and matched Villanova from long range. The Pirates made their first six 3-pointers — none better than Rhoden, who made three and scored 17 points.

Seton Hall snapped a 17-game road losing streak to Villanova with a 70-64 victory last February and showed again it can give the Wildcats fits like few other teams in the conference.

Seton Hall: The Pirates could have used a big road win to bolster their confidence as they head toward a rugged stretch of games. “I like the way we’re progressing offensively. I like what the guys are doing,” Willard said.

Villanova: Reserve F Eric Dixon had hurt his Achilles tendon and played only two minutes. ... G Bryan Antoine (shoulder) did not play after Wright said the sophomore was closer to making his season debut.

The Wildcats are scheduled to host Providence on Saturday. The game time was moved to 2:30 p.m.