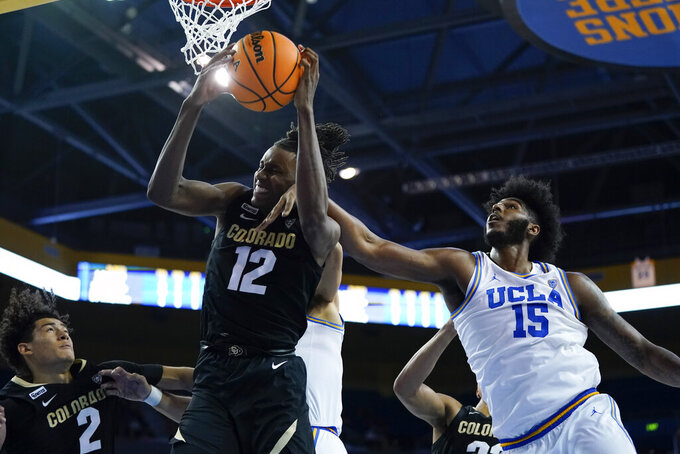 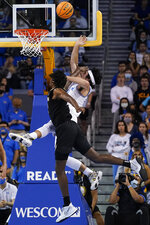 Campbell scored 21 points, tying his career high with four 3-pointers, and No. 5 UCLA recovered after blowing most of a 17-point first-half lead to beat Colorado 73-61 on Wednesday night in the Bruins’ Pac-12 opener.

“I always try to play confident. I like to take big shots,” said Campbell, who was one off his career high of 22 points. “My teammates were finding me. I just got some good looks and I knocked them down.”

Campbell finished with seven rebounds, five assists and one turnover in 33 minutes with Westbrook watching it all. The former UCLA and current Los Angeles Lakers star served as honorary captain. He was joined by his wife, Nina, who also played basketball for the Bruins.

“I hear some of the things he said during game. He told me to keep shooting and be aggressive,” Campbell said. “It means a lot for him to even come back and watch us play.”

Johnny Juzang added 15 points and Myles Johnson had 12 points and 10 rebounds for the Bruins (7-1, 1-0 Pac-12), who overcame the loss of Jaime Jaquez Jr. midway through the first half.

“Even when a guy like Jaime goes down, they still come at you,” Colorado coach Tad Boyle said. “We have to play better, make shots and get rebounds.”

Jabari Walker had 22 points and 11 rebounds to lead the Buffaloes (6-2, 1-1). Evan Battey, their leading scorer who averages 14.9 points, was held to four points before fouling out with 6:30 remaining.

After shooting 37% in the first half, the Buffs came out strong to start the second half. They outscored UCLA 21-11 to trail 48-44 despite Battey picking up his fourth foul and Walker his third.

After the Bruins stretched their lead to 54-44 on an inside basket by Jules Bernard, Battey scored to draw the Buffs within single digits before he fouled out. Colorado outscored UCLA 38-34 in the half.

Campbell scored five in a row and Bernard hit a 3-pointer to push UCLA's lead to 62-49. The Bruins had their own foul trouble. Johnson and Jaylen Clark earned their fourth fouls within a minute of each other.

Johnson started his seventh straight game in place of Cody Riley, who sprained his left MCL in the season opener on Nov. 9 and has been out ever since.

“What I told him was that’s who I want to see every day,” Cronin said. “He’s been such a nice guy his whole career. I told him to come meaner.”

Johnson, a graduate transfer from Rutgers, is thriving on Cronin challenging him.

“He definitely wants me on offense to be as aggressive as possible and try to score whenever I can,” he said. “Even on defense he pushes me to be the best player I can be.”

The Bruins raced to an 18-9 lead to open the game, with Johnson scoring six points, highlighted by a huge dunk.

The Buffs closed within six before UCLA ran off 11 straight points for its largest lead of the game, 33-16. Clark slammed a one-handed jam and Bernard hit a 3-pointer on back-to-back possessions that capped the spurt.

Jaquez got knocked on his back by Walker under the basket and went down with a thud midway through the first half. Cronin and a trainer came out to help Jaquez get up. He walked off under his own power and went to the locker room. He watched the rest of the game from the bench as a precaution.

“He fell pretty hard on his head,” Cronin said. “He passed all the concussion tests, but I just wasn't comfortable. I wanted to err on the side of safety.”

Walker got fouled by Bernard late in the half, crashing to the floor on his back in the paint. Walker dinged his right hand in the opening seconds and briefly left the game then, too.

Colorado: The Buffaloes were picked to finish sixth in the league. They beat Stanford by four points in their Pac-12 opener and had the Bruins on the ropes, but couldn't finish them off. “We knew it was going to be a tough week,” Boyle said. "This was the toughest game, and UCLA was tougher.”

UCLA: The Bruins resume the bulk of their Pac-12 schedule starting Dec. 30, when they host No. 11 Arizona. Between now and then, they'll travel to Marquette and return to Las Vegas for their fourth and final game of the season in Sin City, where they'll face North Carolina. They are 14-11 in Vegas since the league tournament moved there before the 2012-13 season.

Colorado: Hosts No. 13 Tennessee on Saturday in the first of five straight home games.

UCLA: Visits Washington on Sunday, its first Pac-12 road game. The Huskies are dealing with COVID-19 issues and had their game at Arizona on Thursday postponed.