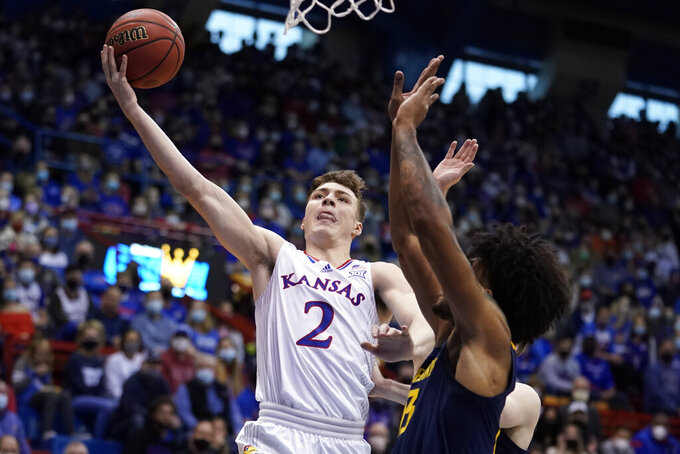 LAWRENCE, Kan. (AP) — Kansas has been waiting all season for David McCormack to give the No. 9 Jayhawks a consistent force inside.

It's been waiting for Jalen Wilson to finally shake off a season-long slump, too.

McCormack had 19 points and 15 rebounds in a virtuoso outing against West Virginia. Wilson added 23 points and eight boards of his own. And Agbaji, the Big 12's leading scorer, merely had 20 points and seven rebounds as the Jayhawks shook off a sluggish first half to rout the Mountaineers 85-59 on Saturday.

“I thought everyone played well. David and J-Will, they played their best games of the season,” Agbaji said. “We were just aggressive in the second half. We were aggressive defensively, offensively, trying to find our places, and when we were able to make a jump and make a run, that's when we took it.”

The Jayhawks (14-2, 3-1) led just 33-31 at halftime but blitzed through the final 20 minutes, outscoring the Mountaineers 52-28 to remain perfect against them in 10 matchups at Allen Fieldhouse.

They did it by piling up 23 assists, including a bunch on alley-oop dunks, and by building a 54-20 advantage in the paint.

“I think it was just moving the ball,” McCormack said. “Coach made an emphasis if we moved the ball and went side to side, we were able to get whatever we want. Once we bought in to that style of offense, it just made everything fun.”

Having no fun at all was Taz Sherman, the Big 12's second-leading scorer at nearly 20 points a game. The West Virginia guard was 1 of 9 from the field, 0 for 5 from beyond the arc and finished with five points and two rebounds.

“We were making shots and getting stops, and it's easy to play with energy when that's happening,” Bridges said. “In the second half, we came out flat. They went on a big run, and y'all know what happened next.”

You could have never guessed it by watching the first half, though.

The Mountaineers got off to a slow start before unspooling a 14-0 run through the middle of the first half, building a 25-19 lead with about 6 1/2 minutes to go. But the Jayhawks answered a few minutes later, when Agbaji bookended his 3-pointer with a couple more buckets, and Kansas scored nine straight to take a two-point lead to the locker room.

More important than the score, though, was the flow of the game.

The Jayhawks are among the nation's highest-scoring offenses, leading the Big 12 at nearly 82 points per game, while West Virginia's physical, in-your-shorts defense had held 10 of its first 15 opponents to 60 points or fewer.

In other words, the Mountaineers had the plodding pace they wanted.

Until the second half began.

The Jayhawks picked up speed at both ends of the floor, turning their own lockdown defense into some fast-break offense. They scored the first nine points to push the lead to 42-31 at the first media timeout, then kept building on the advantage, and it eventually swelled to 57-40 on Wilson's transition layup with 10 minutes to go.

Indeed, the party was on by the final few minutes: McCormack flexing after a put-back dunk, Wilson strutting back up court after an alley-oop jam of his own, and Agbaji taking a nifty back-door pass for yet another easy dunk.

The Jayhawks cruised to their fifth win in their last six games against West Virginia.

“I guess the easiest thing to say is we came out at halftime flat,” Mountaineers coach Bob Huggins said. “We didn't make shots, we turned the ball over entirely too much in the second half. They played better. They played way better.”

West Virginia was simply two different teams from the first half to the second. The Mountaineers controlled the tempo and prevented Kansas from getting into transition the first 20 minutes, then unraveled after the break. Poor 3-point shooting didn't help — they were 4 of 18 from beyond the arc.

Kansas shot 61.1% in the second half, and Wilson was a big part of it. He was 10 of 13 from the floor and his 23 points matched a career high in scoring, while five assists and just one turnover allowed everyone else to stay involved. That's the kind of stat line that makes the Jayhawks nearly unstoppable on offense.