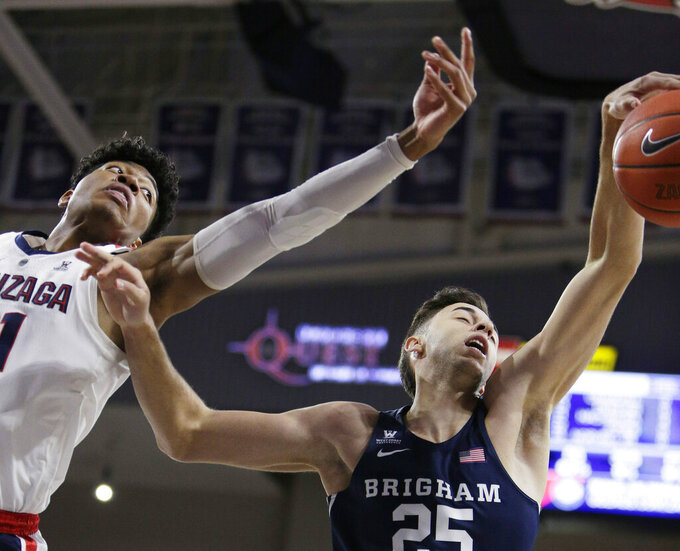 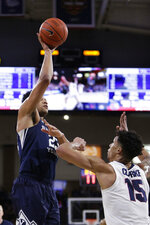 SPOKANE, Wash. (AP) — Rui Hachimura had to think for a bit when asked how No. 2 Gonzaga was able to score with ease against BYU.

"I don't know," Hachimura initially said before mulling it over. "Just sharing the ball. Everybody can score. Just trusting each other."

Brandon Clarke added 11 points and 10 rebounds in a win that cleared a path for Gonzaga to possibly be ranked No. 1 on Monday.

"Our defense is pretty good, too," Hachimura said after the Bulldogs held BYU to 41.9 percent shooting.

It was senior night at Gonzaga, but Hachimura, a junior, declined to say if this was his final home game. He's been projected as a first round NBA draft pick.

"I just love being here," Hachimura said. "I love my coaches. I appreciate everybody."

Gonzaga (27-2, 14-0) has won 18 in a row, the longest streak in the nation, and has already clinched the West Coast Conference regular-season title.

"It couldn't have been scripted better," Gonzaga coach Mark Few said. "We shared it and took great care of the ball. Our offense was clicking.

"We were able to string some stops together. ... That's when we made our separation."

The Cougars trailed by 11 points when Gonzaga went on a late 23-3 run to ice the game.

"Our execution was not there at the end of the game," BYU coach Dave Rose said. "That's two games in a row that have gotten away from us in the last seven or eight minutes."

The Bulldogs won their seventh consecutive league title and will be the top seed at the conference tournament in Las Vegas next month.

"They're doing a number on the rest of the conference this season," Rose said.

Gonzaga led 51-38 at halftime behind 18 points from Norvell and 57-percent shooting.

Perkins hit a 3-pointer to put Gonzaga up 58-44 early in the second.

BYU couldn't cut that lead to single digits, in part because leading scorer Childs picked up his third and fourth fouls early in the second.

The Cougars suffered through a 1-for-13 drought and Gonzaga extended the lead to 87-56 with just over 5 minutes left, capping a 23-3 run.

BYU was hampered by 15 turnovers, to only six for Gonzaga. The Cougars were outrebounded 40-31, and were outscored 46-30 in the paint.

Clarke didn't get going until late in the second half, but finished with a double-double. He and Hachimura have scored in double figures in all of Gonzaga's games this season.

Gonzaga seeks to replace Duke at No. 1 on Monday, after the Blue Devils lost to No. 8 North Carolina on Wednesday before rebounding to win at Syracuse earlier Saturday.

Gonzaga: Gonzaga leads the nation in scoring at 90.3 points per game ... The Bulldogs are outscoring WCC opponents by an average of 28 points.

Gonzaga: Plays at Pacific on Thursday night and finishes the regular season Saturday night at Saint Mary's. The Bulldogs are trying to go undefeated in the league for the first time since 2013.