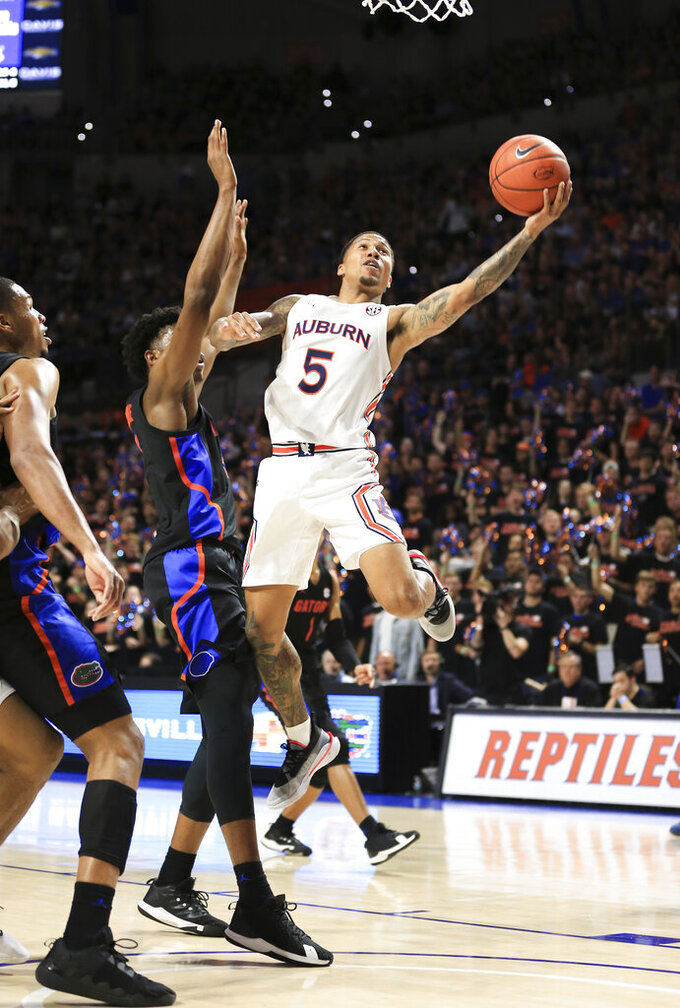 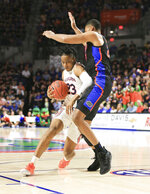 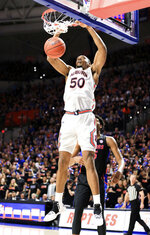 No one expected Payne to start, let along star, in any games this season. So his performance against Auburn was a bigger shock than the final score.

Payne had the best game of his college career, finishing with 19 points and 11 rebounds, as the Gators routed the fourth-ranked Tigers 69-47 on Saturday.

“Elite,” teammate and fellow big man Kerry Blackshear Jr. said. "Great on both ends of the floor. His energy was great. We fed off his energy. He was a big reason why we were able to get this win."

It was Florida's first victory against a top-five team since beating then-No. 2 Michigan State in 2009. It was the 14th time this season that an unranked team knocked off a top-five opponent.

“Obviously, there's a pretty big price on our head," Pearl said. “We're ranked fourth in the country. Obviously, that's not going to last much longer. I think we've got to respond to the step up that we saw this week from both Alabama and Florida."

Pearl gave Payne, Blackshear and point guard Andrew Nembhard credit for continually breaking down his team's defense. He also placed some blame on his starting backcourt of Samir Doughty and J'Von McCormick, who combined for 14 points, three rebounds, two assists and three turnovers. The duo was 2 for 10 from 3-point range.

Pearl conceded that his team's lack of size outside center Austin Wiley will continue to be a weakness.

Florida exploited it, with Blackshear pulling Wiley outside and allowing Payne to crash the boards on both ends. Payne made all nine shots, scoring mostly on putbacks and tip-ins. He finished with seven offensive rebounds. It was a huge day for a guy who entered the game averaging 4.3 points and 4.1 rebounds.

“He just continues to improve," White said. "He hasn't had a bad practice in a long time. ... He just brings it.”

Payne's three-point play, which came after his final offensive rebound, put Florida (12-5, 4-1) up by 14 with a little more than 4 minutes to play.

The Gators sent the home crowd into a late frenzy — and to the exits — with a 14-0 run that included 3-pointers by Noah Locke, Keyontae Johnson and Blackshear. Fans chanted “over-rated” in the closing minutes.

Students stayed and chanted “Omar Payne” as he left the court following radio and TV interviews.

“When we come out with that (kind of energy), we look like we're the best team out here,” Payne said. “We just got to do that every game.”

Locke and Blackshear finished with 11 points apiece for the Gators, who haven't lost at home to Auburn since 1996. Blackshear added a season-high-tying 16 rebounds.

The Tigers struggled out of the gate, missing 15 of their first 16 shots. But Florida failed to take advantage of Auburn's sluggishness, turning the ball over far too often for White's liking.

Auburn kept it close thanks to those turnovers and being perfect (10 for 10) from the free throw line.

The Gators led by five at the break and quickly built a double-digit lead coming out of the locker room. Nembhard, Johnson and Blackshear made consecutive baskets and then Payne pushed the lead to 11 with a putback and a layup.

Nembhard played despite missing three days of practice with the flu. Team officials moved him and roommates Locke and Johnson into hotel rooms for one night while their apartment was completely cleaned and sanitized.

“In my head, I was never not going to play today," Nembhard said. "I felt better every day.”

Auburn: The Tigers won't win many, if any, games shooting like this. Purifoy made 3 of 11 shots and Doughty was 3 of 12 from the field.

Florida: The Gators finally look like a top-10 team. They opened the season ranked No. 6 but lost two of their first four games. White tweaked the offense, and the results are starting to show.

Auburn: Hosts South Carolina on Wednesday. The Tigers have lost four of the last six in the series.

Florida: Plays at LSU on Tuesday. The Gators have won four of the last five meetings, including two in overtime.