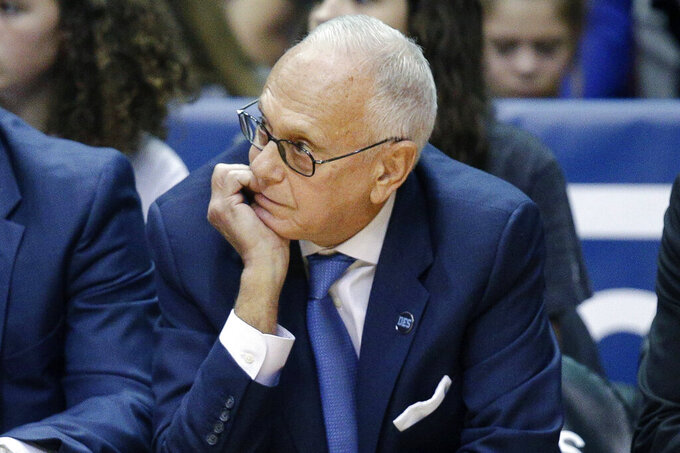 FILE - In this March 6, 2016, file photo, SMU head coach Larry Brown watches his players from the bench during the first half of an NCAA college basketball game against Cincinnati in Cincinnati. Memphis coach Penny Hardaway has added Hall of Famer Larry Brown to the Tigers’ staff as an assistant, reuniting the former New York Knicks player and coach. (AP Photo/John Minchillo, File)

MEMPHIS, Tenn. (AP) — Penny Hardaway has wanted Larry Brown to coach with him ever since he took over at his alma mater. Three years later, they have that chance at Memphis.

“I've always wanted to be around greatness,” Hardaway said Monday after Brown's first practice as his assistant. “It doesn't mean that I didn't know anything myself. It's just iron sharpens iron. ... That's why I kept fighting to get him here.”

Hardaway played for Brown when both were with the New York Knicks. Now, the only coach to win championships in both the NCAA (with Kansas in 1988) and the NBA (Detroit Pistons, 2004) is 80, and his last coaching job in 2018 was as head coach of Auxilum Torino in Italy's Lega Basket Serie A.

A 2002 Naismith Memorial Hall of Fame inductee, Brown won 1,098 NBA games and reached the playoffs 18 times over 26 seasons. His NCAA title with the Jayhawks was among three Final Four appearances his teams made in the 1980s, one of them with UCLA.

Brown said his hearing aids picked up every sound during Monday's one-hour workout and he loved the smell of the gym. His respect for Hardaway is a big reason he agreed to come to Memphis, and he is ready to do whatever is asked of him, sharing everything Brown was taught in his 42-year coaching career.

“I’m not here to invent Memphis basketball," Brown said. “I'm here to share what Penny needs from me.”

Brown, who went 94-39 at SMU from 2012-16, joins a Memphis program that won the NIT championship this spring. Hardaway and the Tigers will try to earn the program's first NCAA Tournament appearance since 2014.

Brown said Memphis' history — with three Final Four berths — makes the program “as good a job as there is," with a new facility and in a city that loves basketball. The Tigers play their games at the FedExForum, home to the NBA's Grizzlies.

“I told Penny this can be like Georgetown, like Gonzaga,” Brown said. “We're not in a Power Five (conference), but this could be anything that we want it to be.”

Memphis announced Brown's hiring late last week, and the veteran coach went on a recruiting trip with Hardaway over the weekend. Hardaway praised Brown as someone whose resume speaks for itself and said he knows some people didn't want him to hire him, which is why he had to fight “pretty hard” to hire him.

Ego is not a consideration.

“I ultimately want to win and getting a coach like Coach Brown on your staff that puts you closer to your goal, especially with the guys that we're recruiting,” Hardaway said. "It doesn't matter what people say. I know what I bring to the table, and obviously we all know what he brings to the table.”

The big question now is how long will Brown stick around. Hardaway sees someone who is rejuvenated after being away from basketball a little bit.