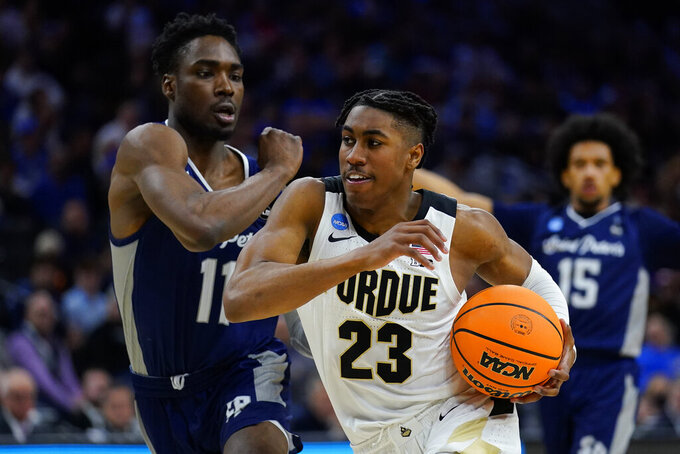 Purdue's Jaden Ivey (23) drives past Saint Peter's KC Ndefo (11) during the second half of a college basketball game in the Sweet 16 round of the NCAA tournament, Friday, March 25, 2022, in Philadelphia. (AP Photo/Matt Rourke)

“This has been a lifelong dream of mine and I am beyond excited for this journey,” Ivey posted on his social media accounts Thursday.

Ivey averaged 17.3 points, 4.9 rebounds and 3.1 assists per game and was named to The Associated Press All-America second team. He joined Duke’s Paolo Banchero as the only players this season with 600 points, 175 rebounds, 100 assists, 30 steals and 20 blocked shots. Ivey is the fourth Big Ten player in 30 years to achieve those marks.

The 6-foot-4 guard from South Bend, Indiana, is projected to be selected early in the first round of the June 23 draft.

Ivey played his best against ranked opponents, averaging 19.1 points, 5.1 rebounds and 4.4 assists in nine games. He scored in double figures in 33 of his 36 games and had a team-best 14 games of at least 20 points.

Ivey had a combined 40 points and shot 5 for 10 on 3-pointers in the Boilermakers' first two NCAA Tournament games. He struggled in the regional semifinal loss to Saint Peter's, with nine points and six turnovers.

Ivey is the third Purdue player in recent years to declare for the draft as an underclassman. Caleb Swanigan did it in 2017 and Carsen Edwards in 2019.