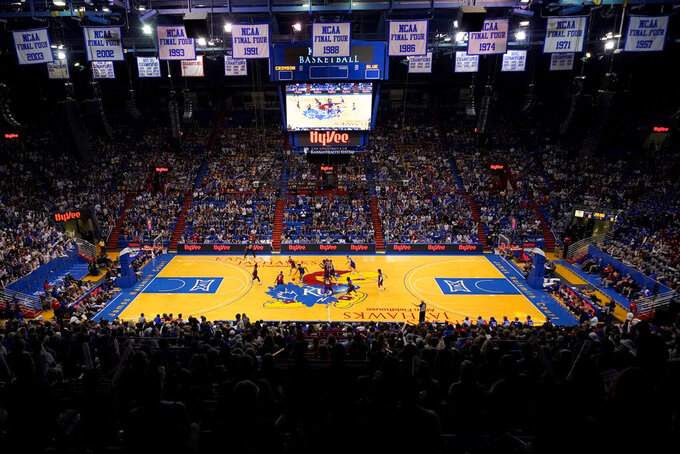 LAWRENCE, Kan. (AP) — Kansas coach Bill Self was still trying to come to terms with a historically bad NCAA Tournament defeat to Southern California at Hinkle Fieldhouse in Indianapolis when he was asked what had to change going forward.

How could the Jayhawks make sure another 81-52 drubbing didn't happen next season?

The first words out of his mouth: “You can recruit.”

Self just about rebuilt his entire roster over the ensuing months, bringing in a standout four-man freshman class and landing perhaps the nation's best bunch of transfers. Among them are Remy Martin, the do-everything Arizona State guard who had toyed with going pro, Iowa State's Jalen Coleman-Lands and NCAA tourney star Joseph Yesufu of Drake.

Throw in the return of Ochai Agbaji and Jalen Wilson, both of whom declared for the draft before withdrawing their names, and emerging big man David McCormack and the third-ranked Jayhawks have national title aspirations once again.

“Yeah, we're pretty athletic. Fast,” Self acknowledged. “We play faster. We've got more guys that can push it. Even our veterans push it better than they did last year. Playing fast doesn't necessarily mean shooting fast, but I think we'll be a team that can definitely have really good ball movement by the time we get to playing games.”

Despite all the newcomers, the Jayhawks should be one of the most experienced teams in college basketball, too. Martin, Coleman-Lands, McCormack and transfer Cam Martin are all seniors, Agbaji and sharpshooter Christian Braun are juniors, and Wilson, Yesufu and guard Dajuan Harris Jr. are third-year sophomores.

That kind of experience is rare these days, particularly among the game's blueblood programs.

“I mean, having those types of guys on the team just raises the level for everyone else,” Coleman-Lands said. “And we got some guys that can run, from the guards to the bigs. ... That’d be our game style for this upcoming year.”

The Jayhawks once again loaded up with non-conference powerhouses. They open against Michigan State in the Champions Classic on Nov. 9 at Madison Square Garden, potentially face Alabama in the ESPN Events Invitational, visit St. John's in the Big East-Big 12 Battle and welcome Kentucky to Allen Fieldhouse for the Big 12-SEC Challenge.

Two former Big 12 rivals are on the schedule this season. The first is Colorado on Dec. 21, while the second is sure to earn some national attention: Missouri on Dec. 11. The bitter rivals have not played the game known as the Border War since the Tigers bolted for the SEC in 2012, largely because Self was so upset by the unstable footing upon which the Tigers left the league that he refused to play them out of conference.

Zach Clemence is an athletic 6-foot-10 forward that can stretch the floor, K.J. Adams is a 6-7 swingman whose athleticism fits perfectly with what the Jayhawks want to do this season, and Bobby Pettiford provides depth at the guard spot. But a big bonus in the recruiting class came when Kyle Cuffe Jr., a four-star prospect out of New Jersey, reclassified from the 2022 class so that he could join the Jayhawks for the upcoming season.

The Jayhawks enjoy one of the most intimidating venues in college basketball, but COVID-19 restrictions last season meant Allen Fieldhouse was nearly empty for the first couple games and had only a few thousand the rest of the way. The Jayhawks are hopeful that 16,300 can squeeze into the old barn again this year.

"This is the greatest environment you can possibly play in,” backup guard Chris Teahan said. “It’s so loud in there. You’ll get goosebumps the first time you hear the crowd noise.”

Kansas is among several schools that is still awaiting a decision from the Independent Accountability Resolutions Process after appealing several NCAA penalties. The list of allegations include five Level I infractions, a responsibility charge against Self and a tag of lack of institutional control. The case tied to the FBI's investigation into college corruption was accepted by the IARP on July 1, 2020, but nobody is quite sure when the laborious process will be complete.