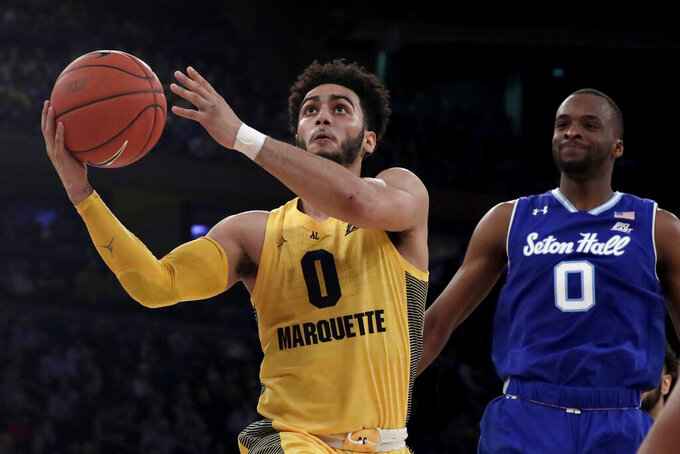 Marquette guard Markus Howard (0) goes up for a shot against Seton Hall guard Quincy McKnight (0) during the first half of an NCAA college basketball semifinal game in the Big East men's tournament, Friday, March 15, 2019, in New York. (AP Photo/Julio Cortez) 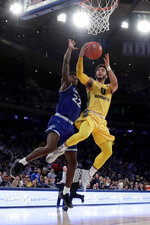 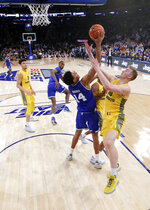 NEW YORK (AP) — Instead of a showdown between the Big East's top two scorers, Seton Hall-Marquette devolved into a chippy foul-fest and ended with the league's player of the year coming up short on a potential winning 3.

After 57 fouls — including nine technicals — were called, 85 free throws were shot and three players were ejected, Marquette star Markus Howard had a good look in the waning seconds and a chance to make up for one of his worst games of the season. The shot hit the front of the rim at the buzzer, and Seton Hall advanced to the Big East Tournament championship with an 81-79 victory Friday night in a game that had just about everybody involved struggling to make sense of it all.

"Just so many unusual things happened," Marquette coach Steve Wojciechowski said. "It was the most unusual basketball game I've ever been a part of, and I feel bad for my kids. I wish our kids would have had a chance to decide the game, and their kids, too."

"It was crazy," said Powell, who is second in the conference in scoring. "I thought I let my teammates down."

The third-seeded Pirates (20-12) will face top seed and defending champion Villanova on Saturday night at Madison Square Garden in a rematch of the 2016 title game won by Seton Hall.

Howard, the Big East's leading scorer, scored 21 points, but was 1 for 15 from the field. He also went to the locker room with 2:24 left in the first half, favoring his left wrist. He started the second half, but the 90 percent free-throw shooter was 18 for 24 from the line for Marquette (24-9).

"He was well enough to play," Wojciechowski said.

Powell, who scored a tournament-record 29 points in the first half of the quarterfinals against Georgetown, went on a personal 8-0 run in the second half against Marquette. He hit a pair of 3s and a pull-up jumper that gave Seton Hall its first lead, 46-44, with 14:55 left.

Soon after, he picked up his third foul. That drew complaints from Seton Hall coach Kevin Willard, who was given a technical. Marquette hit four free throws to regain the lead.

Moments later, Powell was fouled going to the rim and officials had to separate the teams with 12:18 left. No punches were thrown, but Seton Hall's Sandro Mamukelashvili and Marquette's Sacar Anim and Theo John were ejected with technicals handed out left and right.

"It was really tough for us not having our two best defenders in the game, Sacar and Theo," Wojciechowski said.

Powell received a technical, too, and it looked as if he had also been ejected when he walked toward the locker room. He returned moments later to the bench, with four fouls.

Head official James Breeding spoke to a pool reporter after the game to explain the calls. He said because Powell had a flagrant personal foul in the first half, the Seton Hall bench thought that their star had been ejected.

"It probably wasn't communicated clearly to them that his personal foul in the first half is a live ball flagrant personal foul, which carries a different penalty than the technical foul," Breeding said. "And those two together don't result in ejection."

As for all the whistles, Breeding said: "I would just say that the fouls that were called are fouls we've called all year throughout the season."

Willard said after the fracas he thought the officials did a good job controlling the game.

"It was an emotional game. It's Friday night in the Garden, Big East Tournament," Willard said. "Both teams played extremely hard. Emotions were running, which, it's the Big East."

Powell wasn't done, though. He hit consecutive 3s to get the Pirates fans jumping, the second giving Seton Hall a 64-63 lead with 6:35 left. Powell backpedaled down the court, looking over his shoulder toward the Marquette bench.

Marquette: The second-seeded Golden Eagles will enter the NCAA Tournament having lost five of six.

Seton Hall: The Pirates split with Villanova in the regular season.

Marquette: The Golden Eagles will find out their NCAA Tournament opponent Sunday.