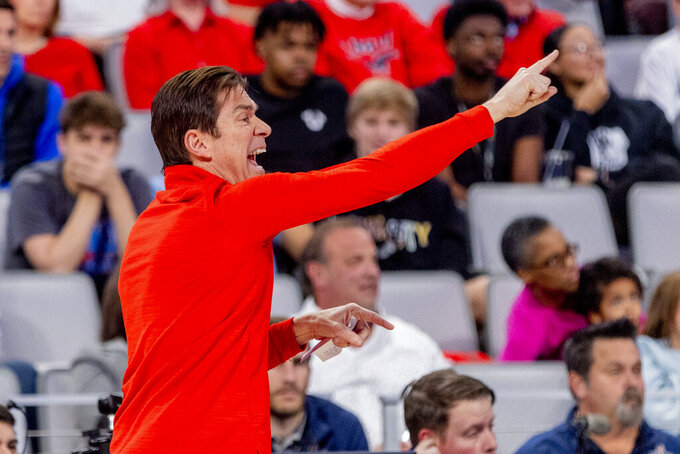 SMU head coach Tim Jankovich yells to his team during the first half of an NCAA college basketball game against Memphis in the semifinals of the American Athletic Conference tournament in Fort Worth, Texas, Saturday, March 12, 2022. (AP Photo/Gareth Patterson)

DALLAS (AP) — SMU coach Tim Jankovich announced his retirement Tuesday after six seasons as head coach of the Mustangs, and nearly four decades in a coaching career that included stints as an assistant for Larry Brown and Bill Self.

The 62-year-old Jankovich was head coach at Illinois State from 2008-12, before he left the Redbirds to join SMU's staff when Brown took the job there. Jankovich succeeded the Hall of Famer as head coach before the 2016-17 season, when the Mustangs went 30-5 and made their last NCAA Tournament appearance.

SMU was 24-9 this season, which ended Sunday in the second round of the NIT with a 75-63 loss to Washington State that was its only home defeat this season. That came a week after being left out of the 68-team NCAA Tournament field, and Jankovich said his team was still “wounded” and disappointed from that snub.

The Mustangs finished second in the American Athletic Conference regular-season standings behind Sweet 16 team Houston, which they beat once. They also beat NCAA tourney team Memphis twice in the regular season before losing to the Tigers in the AAC Tournament semifinals.

Jankovich has a career record of 282-185 as a head coach. He was 53-57 in his first head coaching job at North Texas from 1993-97, was 104-64 at Illinois State and 125-64 at SMU. Among his stops as an assistant were at Kansas and Illinois with Self, along with time at Texas, Baylor, Oklahoma State, Kansas State and Vanderbilt.

Jankovich said it was time to step back after basketball had been the center of his life since he was in the eighth grade. He said he cherished every minute of it.

“I find myself at a stage in life where I no longer can in good conscience make the necessary sacrifices that this position demands,” Jankovich said. “I feel a strong pull to spend more time with the people whom I have unfortunately neglected the most over the years — my dad, my family and my friends.”