Sweet 16 primer: All eyes on Peacocks after wild 1st weekend 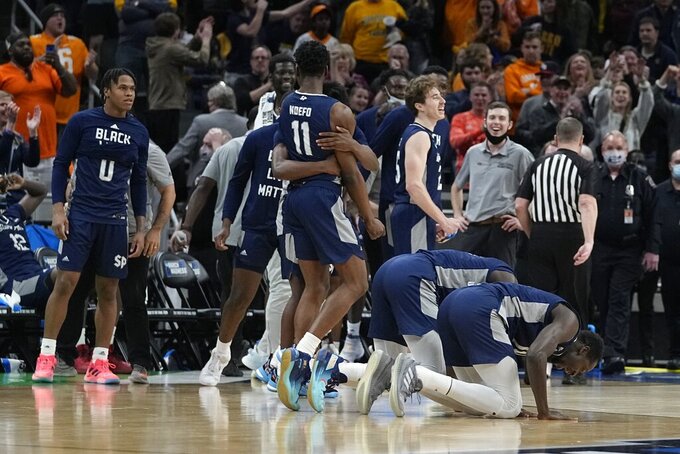 Saint Peter's players celebrate after defeating Murray State in a college basketball game in the second round of the NCAA tournament, Saturday, March 19, 2022, in Indianapolis. (AP Photo/Darron Cummings)

Top seeds Gonzaga, Kansas and Arizona are in. So is little Saint Peter’s, the giant killer and only the third No. 15 seed to make it this far in the NCAA Tournament.

And Coach K's farewell tour continues as he and his Duke Blue Devils made it to the Sweet 16, too.

All eight of the regional semifinal matchups are set after a wild opening weekend that saw seven double-digit seeds win in the first round and four of them move on.

This is the second year in a row a No. 15 seed has captured the imagination of basketball fans.

Last year, it was Oral Roberts, which came within a missed 3-pointer at the buzzer from beating Arkansas and going to the Elite Eight. This time, it's those lovable Saint Peter's Peacocks, who knocked off Kentucky and Murray State and don't have a single player that made the All-Metro Atlantic Athletic Conference first team.

The Peacocks (21-11) will face No. 3 seed Purdue (29-7), and this group of New Jersey toughs won't be intimidated by the Boilermakers' considerable size advantage.

First-year coach Hubert Davis' Tar Heels are the hottest team in the tournament, having won eight of nine after their rout of Marquette and overtime win over defending champion Baylor. UCLA turned back Akron's upset bid and rolled past Saint Mary's.

No. 1 Gonzaga (28-3) plays No. 4 Arkansas (27-8) after overcoming slow starts against Georgia State and Memphis. The Zags had to erase a 12-point deficit early in the second half to get past ninth-seeded Memphis and advance to the Sweet 16 for a seventh straight time.

“From here on out, they’re all tough,” coach Mark Few said.

Arkansas was pushed to the limit by double-digit seeds Vermont and New Mexico State. The Razorbacks struggled offensively in both games but their defense has been nails.

The other West game pits second-seeded Duke (30-6) against No. 3 Texas Tech (27-9). A hard-earned 85-76 win over Tom Izzo and Michigan State sends Mike Krzyzewski west to his record 26th Sweet 16. The Red Raiders, with first-year coach Mark Adams, made it past the second round for the first time since their run to the 2019 national championship game.

No. 11 Michigan (19-14) will face second-seeded Villanova (28-7) in a rematch of the 2018 national championship game won by the Wildcats. Like Saint Peter's, the Wolverines are a pretty good story, too.

They underperformed in the regular season, coach Juwan Howard was suspended five games for a postgame dust-up with Ohio State and going one-and-done at the Big Ten Tournament made for a nervous Selection Sunday.

Here they are in a fifth straight Sweet 16 after rallying to beat Colorado State and then revving up in the second half to knock out third-seeded Tennessee.

The Wildcats nearly got tripped up on their way to the Sweet 16 in coach Tommy Lloyd's first season. Thanks to a combined 58 points from Bennedict Mathurin and Christian Koloko in an 85-80 overtime win over ninth-seeded TCU, Arizona will be playing on the tournament's second weekend for the first time since 2016.

No. 1 seed Kansas (30-6) will face a physical challenge against No. 4 Providence (27-5), which took care of business against South Dakota State and blew out Richmond. Kansas got all it could handle from ninth-seeded Creighton in the second round and is in the Sweet 16 for the first time since 2018.

The game features an intriguing matchup of big men in the Jayhawks' David McCormack and the Friars' Nate Watson.

The Cyclones, who won just two games last season, are in for the first time since 2016 under first-year coach T.J. Otzelberger. They've given up just 103 points in two games — 49 in their upset of Wisconsin, the Badgers' lowest total since 2018.

Miami's 79-61 takedown of No. 2 Auburn puts the Hurricanes in a regional semifinal for the third time under Jim Larrañaga, who would love to recapture the magic of his 2006 George Mason team's run to the Final Four as a No. 11 seed.