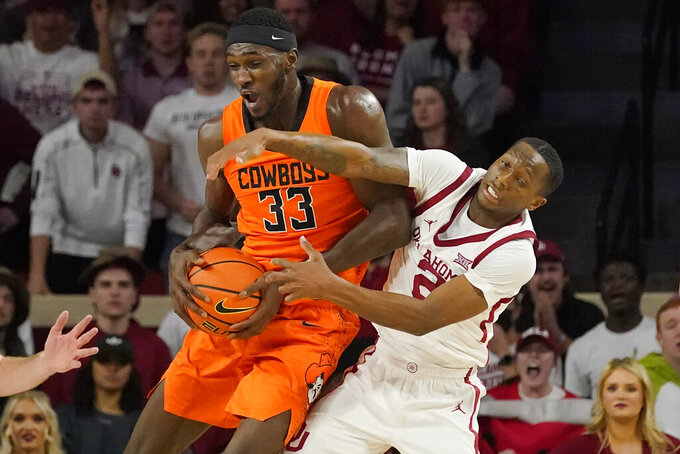 NORMAN, Okla. (AP) — Tanner Groves had 14 points and 10 rebounds, and Oklahoma recovered from squandering a 14-point lead in the second half to beat Oklahoma State 66-62 in overtime on Saturday afternoon.

Jordan Goldwire and Umoja Gibson each added 13 points for the Sooners (15-14, 5-11 Big 12), who snapped a four-game losing streak and got their first win since losing starting guard Elijah Harkless to a season-ending injury.

“They fought," Oklahoma coach Porter Moser said. “They stayed with it, and that’s what we needed. We needed some confidence that we can turn it when something doesn’t go our way in these close games. We’ve lost a bunch of close games, and so it was really well needed for these guys."

The Sooners had lost their previous game 66-42 at Texas Tech on Tuesday.

Oklahoma State won the previous meeting with Oklahoma 64-55 on Feb. 5. In the rematch, Oklahoma jumped out to a 10-2 lead as Jacob Groves scored eight points in the first four minutes.

Oklahoma State recovered with a 9-0 run, but Oklahoma held Oklahoma State scoreless for more than 7 minutes as part of a 13-0 run that gave the Sooners a 25-12 lead.

Oklahoma led 29-19 at halftime after holding the Cowboys to 25% shooting in the first half. Oklahoma State also committed 11 turnovers before the break.

“I wish I could erase the first 20 minutes of the game," Oklahoma State coach Mike Boynton said. "I think I’d be feeling a lot better about what happened today.”

Oklahoma led by 14 in the early minutes of the second half, and a floater by Marvin Johnson gave the Sooners a 46-33 lead with just over 10 minutes to go.

Cisse's dunk on a lob from Isaac Likekele tied the game at 54 with 7.9 seconds left. Oklahoma missed a tip at the buzzer, and the game went to overtime.

Cisse, a 7-foot forward, fouled out with 31.3 seconds left in overtime and the score tied at 62. Oklahoma's Tanner Groves made two free throws to give the Sooners the lead, then Johnson's steal and layup put the finishing touch on the win for the Sooners.

“They were exhausted,” Moser said. “Exhausted mentally and physically. And man, did they need it (the win). They just had pure joy on their faces, pure relief on their faces."

Oklahoma State: The Cowboys waited too long to push the tempo, and when they finally did, it only drew them even. They featured Cisse late in regulation, but he could have helped them overcome their halfcourt shooting issues earlier.

Oklahoma: The Sooners had lost four straight, with two coming by two or fewer points, including an overtime loss at Kansas. They finally got something to show for their solid play.

Cisse, who had been dominant lately, said he didn’t start because he was late for the bus. Boynton said he needed to hold players accountable.

“That kid continues to improve,” Boynton said. “It’s one of the silver linings of what’s been a difficult and frustrating season. Anybody with two eyes can see the strides that he’s made from November 9th when we played our first game to today.”

Oklahoma State has played in three straight overtime games. The first was an 82-79 win over Kansas State on Feb. 19, followed by a 66-64 loss to Baylor on Monday and the loss to Oklahoma.

The super senior from Ardmore, Okla. who transferred from Eastern Illinois matched his season high with 10 points in 30 minutes for Oklahoma.