Unbeaten Michigan could be No. 1 if it beats Badgers on road 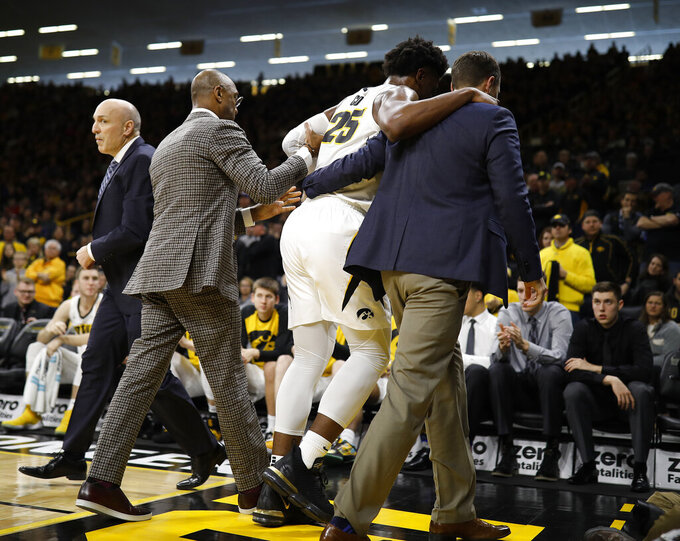 Iowa forward Tyler Cook is helped off the court after an injury during the second half of an NCAA college basketball game against Ohio State, Saturday, Jan. 12, 2019, in Iowa City, Iowa. Iowa won 72-62. (AP Photo/Matthew Putney) 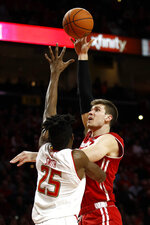 GAME OF THE WEEKEND: No. 2 Michigan at Wisconsin. The Wolverines (17-0, 6-0) go into Madison on Saturday off six straight wins by at least 10 points. The Badgers (11-6, 3-3), who erased a 21-point deficit before losing in overtime to Maryland on Monday, have lost four of five and are trying to avoid a three-game losing streak. Wisconsin's offense runs through big man Ethan Happ. His work will be cut out for him going against 7-foot-1 Jon Teske. Win this one, and Michigan is in line to take over the top spot in The Associated Press Top 25 following Duke's loss to Syracuse on Monday,

LOOKING AHEAD: Maryland's staying power in the conference race will be severely tested with a yikes-worthy schedule over the next month. The Terrapins (15-3, 6-1) play seven of nine games away from Xfinity Center — visits to Ohio State, No. 6 Michigan State, Wisconsin, Nebraska, Michigan and No. 24 Iowa, and a game against Illinois at Madison Square Garden.

PLAYER TO WATCH: Iowa (15-3, 4-3) needs junior forward Tyler Cook to get healthy, and fast. He was held out of Wednesday night's 89-82 win at Penn State with the ankle sprain that forced him out of a home win over Ohio State late in the second half last Saturday. He missed a road game against Northwestern last week with a sore knee. The 6-foot-9, 250-pound Cook is the Hawkeyes' leading scorer and rebounder, and even though they've won four in a row, they need him back for a rigorous three-games-in-eight-days stretch starting next week against Michigan State, Minnesota and Michigan.

INSIDE THE NUMBERS: Eight Big Ten teams are among the top 50 defenses in the nation. Michigan, giving up 56.6 points per game, is third behind Virginia and Texas Tech. Only one conference team is among the top 50 in offense. That's Michigan State, 11th at 85.5 ppg. ... Michigan has won 31 of its last 32 games, and its 17-0 start is best in the league since Ohio State opened 24-0 in 2010-11. ... Of the first 38 conference games, 58 percent (22 games) have been decided by 10 points or fewer, including eight games separated by one possession.

ON THE WOMEN'S SIDE: Rutgers (14-3, 6-0), which beat Purdue 65-63 in overtime Wednesday, has used a balanced offense, tough defense and a veteran lineup to continue its two-year rise under longtime coach C. Vivian Stringer. The Scarlet Knights this week made their first appearance in the AP rankings, at No. 20, and have won nine in a row. They've knocked off ninth-ranked Maryland on their way to first place in the conference. Remember, this was a program that went 6-24 two years ago. The Knights were 20-12 last season, tying for most improved team in the nation, and now they're on track for their first NCAA Tournament bid since 2015.