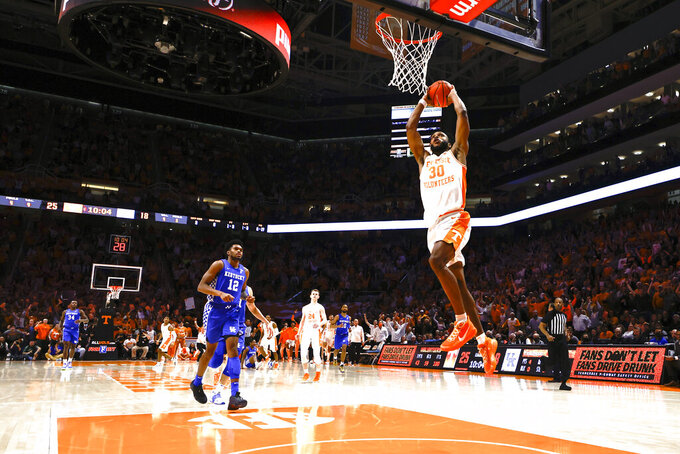 Tennessee guard Josiah-Jordan James (30) goes for a dunk during the first half of the team's NCAA college basketball game against Kentucky on Tuesday, Feb. 15, 2022, in Knoxville, Tenn. (AP Photo/Wade Payne)

KNOXVILLE, Tenn. (AP) — Santiago Vescovi scored 18 points and Chandler Kennedy added 17 to lead No. 16 Tennessee to a 76-63 victory over No. 4 Kentucky on Tuesday night.

Zakai Zeigler and John Fulkerson each added 14 points as the Volunteers (19-6, 10-3 Southeastern Conference) ran their home record to 14-0 this season with their eighth straight SEC victory.

“(Tennessee) needed it more; they wanted it more,” Kentucky coach John Calipari said. "They banged us around. You've gotta own your performance. Can't let anybody alibi. We got manhandled.

“It was a revenge game."

“The biggest difference (between this win and the earlier loss) was that (Kentucky) scored 32 points off (20) turnovers,” Tennessee coach Rick Barnes said. “Tonight, they scored seven (off eight Tennessee turnovers).”

Tennessee led by 14 at halftime. Kentucky cut the difference to eight midway through the second half. That's when the Vols went on a 12-0 run, holding Kentucky scoreless for nearly five minutes.

“At the half, I said, ‘Why don’t we make a comeback?'" Calipari said. “We got it down to eight and had the ball twice but turned it over. We had our chances."

Calipari pointed to the backcourt as being a determining factor.

“Their guards kicked our guards,” Calipari said. “They have to own that.”

“Their guards combined for 48 points the last time we played them,” said Chandler, who had all but two of his points in the first half. “They're great scorers. We knew we had to defend them.”

It was a heated atmosphere from the start. More than 20,000 fans crammed into Thompson Boling Arena for the game in which three technical fouls were called in the first seven minutes.

Calipari got rung up arguing a foul call. Then, a double technical was whistled when Fulkerson went headlong into the Kentucky bench, prompting some pushing and shoving.

Kentucky: Getting guard TyTy Washington (12.8 ppg) healthy is imperative for the Wildcats for their stretch run. He sustained a lower leg injury in Saturday’s win over Florida. He played in the first half, but went to the bench early in the second half. ... Point guard Sahvir Wheeler had missed 19 consecutive shots over three games before making a 3-pointer against the Gators.

Tennessee: While looking ahead to the rematch with Kentucky, Tennessee coach Rick Barnes said Kentucky’s offensive firepower in a 107-79 victory in the first meeting was one of the best performances he’s ever seen. The Wildcats shot 68% from the field, 61% from 3-point distance and hit 20 of 21 free throws. ... The Vols are still searching for depth in the spot vacated by the season-ending ankle injury to Olivier Nkamhoua. Against Vanderbilit on Saturday, Brandon Huntley-Hatfield got the start and Jonas Aidoo played a few minutes in the first half, but neither of the freshmen were on the floor at crunch time. Super-senior John Fulkerson carried most of the load.

Kentucky: The Wildcats have a home date with Alabama on Saturday.

Tennessee: Before the Kentucky game, Barnes called the remainder of his team’s schedule “probably the toughest in the country.” Tennessee has a road game with No. 23 Arkansas on Saturday. After that, the Vols have road games with Missouri and Georgia, then face No. 2 Auburn and Arkansas at home.