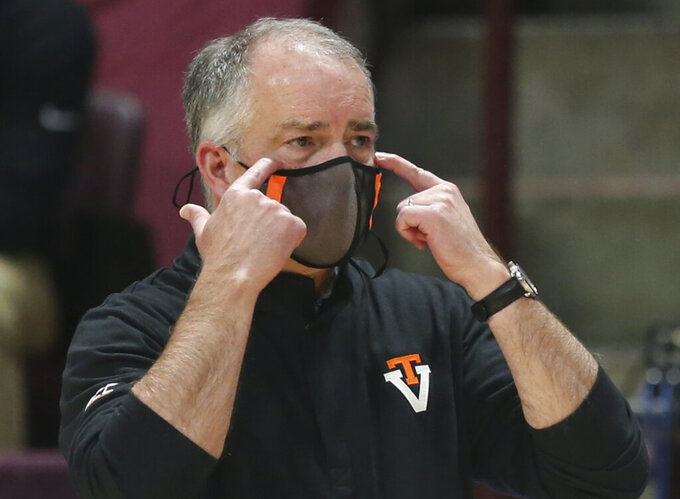 FILE - In this Jan. 10, 2021, file photo, Virginia Tech coach Mike Young watches during the first half of the team's NCAA college basketball game against Notre Dame in Blacksburg, Va. Young is entering his third season as coach of the team. (Matt Gentry/The Roanoke Times via AP, Pool, File)

Virginia Tech had a surprise for the rest of the Atlantic Coast Conference when last season began: a league player of the year candidate in Keve Aluma.

The 6-foot-9 Wofford transfer averaged 15.2 points and 7.9 rebounds as the Hokies finished 15-7 despite a slew of COVID-19-related cancellations.

Aluma, who sat out his first year in Blacksburg, was a major factor and is among five players on the preseason All-ACC team. The Hokies are picked fifth.

“To see what he’s done in our time at Virginia Tech ... is nothing short of amazing to me,” said coach Mike Young, who is entering his third season.

Aluma won't sneak up on anyone this year, nor will the Hokies, who return three of their top four scorers and have added another Wofford transfer, sharpshooting guard Storm Murphy, to add needed punch from long range.

A summer in town has helped the graduate student blend in with the team. So, too, have his 17.8 scoring average, 4.3 assists average, 3.3 rebounds average and 40% marksmanship (on 70 3s) from 3-point territory last season.

“Having a whole summer where we have gym access all the time, where we got to be able to get together with guys and not worry about COVID as much, that’s been huge,” Murphy said. “It’s really just helped the chemistry."

Mutts thinks the culture is already changing for the Hokies.

“Everybody’s confidence has gone up so much since last season,” he said, “so it’s going to show on the court.”

Some other things to watch at Virginia Tech this season:

After the top five, the three other returning players contributed a total of 66 points last season, so they will either need to be much improved or Young will have to rely on contributions coming from at least one of four freshmen.

Mutts was the Hokies' most important player last season, according to Young, and continued improvement should make him more of a force this season.

“He has as high a basketball IQ as I’ve been around in 36 years,” Young said. “He’s a dynamic athlete. He came to us as a good basketball player, but he’s grown by leaps and bounds through his game, his ability to shoot, his ability to make plays off the bounce. ... Justyn Mutts is a difference maker.”

Aluma offered this concise scouting report on Murphy. He played with him at Wofford in the 2018-19 season: “Elite handles. Great shooter, great teammate.”

Cassell Coliseum is an aging, but effective home, with fans not far from the court. The Hokies can't wait to see a packed house after last year's limitations.

"I found myself getting a little choked up before the North Carolina game when our football team ran on the field and again this Saturday when Notre Dame came to town," Young said. “I’ll have those same emotions, I think.”

The Hokies open the season on Nov. 9 at home against Maine, then got on the road to play at Navy three days later. Non-conference games include a matchup with No. 12 Memphis in Brooklyn, New York on Nov. 24, at No. 21 Maryland on Dec. 1 in the ACC/Big Ten Challenge and No. 23 St. Bonaventure in Charlotte, North Carolina on Dec. 17.

ACC road games include all four teams in the preseason Top 25: back-to-back games a week apart at No. 9 Duke and No. 19 North Carolina sandwiched around a Christmas break and visits to No. 25 Virginia and No. 20 Florida State.