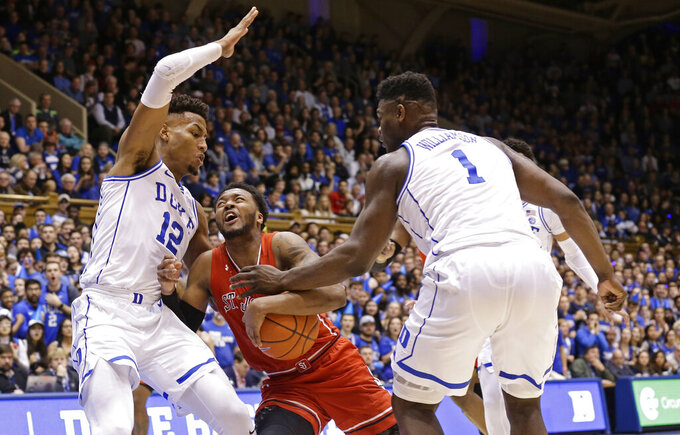 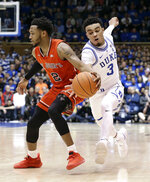 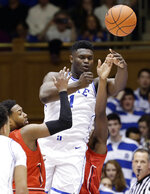 DURHAM, N.C. (AP) — Zion Williamson stole the ball and soared for dunks. He blocked shots with authority. And once again, he scored points in bunches.

In other words, just a typical game for Duke's must-see freshman phenom.

Williamson scored 29 points in the second-ranked Blue Devils' 91-61 rout of St. John's on Saturday while creating the latest set of highlights for the most visible player on arguably the nation's most visible team.

"Nobody has brought in the exposure that he brought in," Krzyzewski said, pointing to Williamson's 2.3 million followers on Instagram. "When does that happen? It may never happen, and it's happening for him. And we are such high profile. Everything is looked at closely, and his excellent play is looked at by everybody.

"And the thing about that kid is, he doesn't want all that attention, and he handles it so well," he added. "We have a good group, so I'm not sure many groups would handle it the same way."

Tre Jones flirted with a triple-double with 13 points, seven rebounds and seven assists while playing lockdown defense on Shamorie Ponds. And RJ Barrett added 15 points and 14 rebounds for the Blue Devils (19-2), who shot 56 percent while winning their fifth straight.

Williamson stuffed the stat sheet in this one — hitting 13 of 17 shots while finishing with five steals, two blocks and a couple of his customary highlight-reel dunks.

He scored 12 points — all either at the rim or the free-throw line — during the 26-6 run that bridged the halves and pushed the lead into the 20s. Cameron Reddish capped the run with his fourth 3 of the game, making it 61-39 with about 16½ minutes left.

LJ Figueroa had 14 points and Marvin Clark II added 12 for the Red Storm (16-6), who fell behind by 20 points before they hit a shot in the second half while losing their third in four games.

Ponds, the hero of last year's upset win over Duke and a 20.9-point scorer, had all 11 of his in the second half.

"I knew that he was a key to their team," Jones said. "So for myself, I knew that I had to come out stronger than him and set the tone early for our entire team."

Ponds faced relentless pressure all day from Jones, and a couple of his five turnovers led directly to breakaway dunks by Williamson.

"We had live-ball turnovers that, to me, just turned the game, turned the whole atmosphere of the game," coach Chris Mullin said.

St. John's: The Red Storm knocked off one Duke team full of one-and-done freshmen — stunning last year's group 81-77 in Madison Square Garden behind 33 points from Ponds — but with Jones neutralizing him this time, they couldn't do it again. If nothing else, though, they're still the answer to a trivia question: St. John's was the last non-ACC team to beat Duke at Cameron Indoor Stadium, pulling it off in 2000.

Duke: The Blue Devils' 3-point shooting remains an enigma. Duke entered shooting just 31 percent from long distance — the worst percentage in school history — even after a 10-for-19 performance five nights earlier at Notre Dame. The Blue Devils promptly made their first four 3s against the Red Storm's 2-3 zone — and then hit just 3 of 22 after that.

Williamson's defining dunks came late in the first half. With Jones pestering Ponds, Williamson picked the Red Storm guard's pocket and the lefty went the other way for a thunderous breakaway slam with his right hand. Williamson did the same thing a few minutes later — stealing the ball from Ponds and soaring in for a right-handed slam — in the final minute of the half to give Duke its first double-figure lead at 47-37.

"To the fans I appreciate the love that they're showing and want me to come to their team. But I'm still in college and I'm enjoying the process and whichever team that drafts me, I'll be ready to work." — Williamson, who has not declared his intentions for next season, when asked about the concept of NBA teams tanking for the chance to draft him.

END OF THE STREAK

Duke backup Jordan Goldwire hit a 3-pointer in the final minute of garbage time, but it was anything but meaningless to him. He had been 0 for 15 for the season from long range, and no player in Division I missed more 3s without making one.