Boeheim to coach Syracuse vs. Duke after fatal car crash 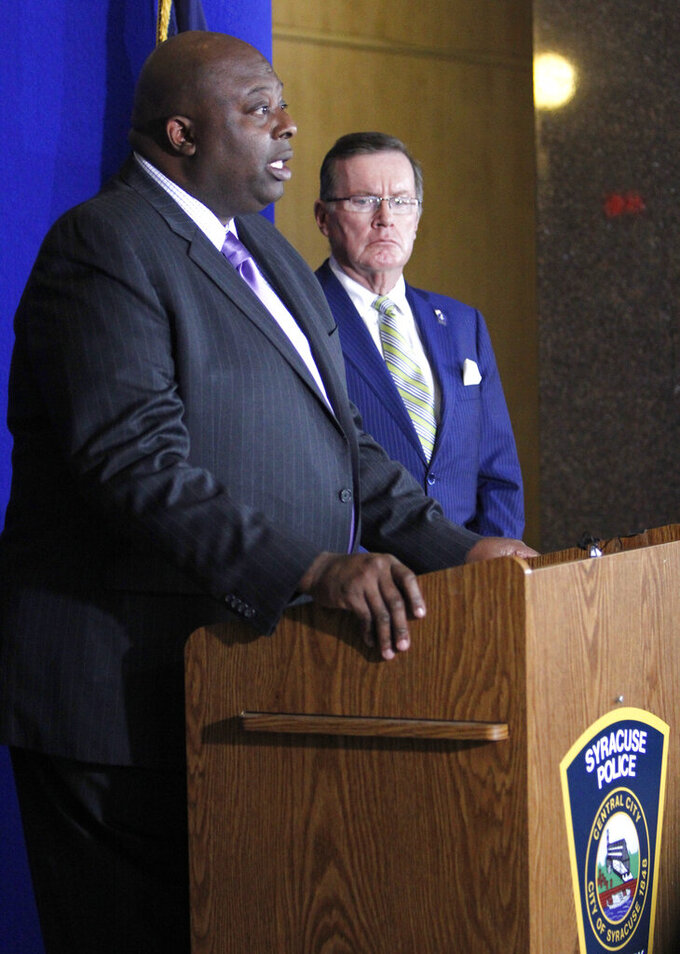 SYRACUSE, N.Y. (AP) — Jim Boeheim has faced his share of obstacles in his long career at Syracuse, none like the one the Hall of Fame coach faces now.

When top-ranked Duke comes to town on Saturday evening for a much-anticipated rematch against the Orange, Boeheim will be dealing with many emotions. It's the team's first game since he struck and killed a pedestrian on a dark highway after guiding the Orange to a victory over No. 18 Louisville on Wednesday night.

Doubts about whether Boeheim might miss the game were dispelled Friday when Syracuse athletic director John Wildhack announced that the 74-year-old Boeheim would be on the sideline.

The accident happened on a dark stretch of Interstate 690 in Syracuse . Police say 51-year-old Jorge Jimenez was a passenger in a car that apparently skidded out of control on a patch of ice and hit a guardrail. Police say Jimenez was trying to get to safety when he was struck by Boeheim's SUV. Boeheim had swerved to avoid the disabled car, which was resting perpendicular across two lanes.

Jimenez was taken to a hospital, where he was pronounced dead. Another man in the car suffered minor injuries.

Police said Boeheim has been cooperating and used the light on his cellphone to warn other drivers of the disabled car after the accident.

Sobriety tests administered to Boeheim and the unidentified driver of the other vehicle were negative for any signs of impairment, according to authorities.

No tickets have been issued and the investigation is continuing. Police Chief Kenton T. Buckner said Thursday evening at a news conference there was "no reason to believe that there are criminal charges that will be coming for anyone."

Boeheim addressed the team on Thursday but did not take part in practice.

Boeheim has been head coach at Syracuse, his alma mater, since 1976 and is one of the most accomplished coaches in the country. He ranks second all-time in wins in Division I with 944, behind only Duke's Mike Krzyzewski.

In the past three decades, Boeheim has dealt with prostate cancer, the death of his best friend to esophageal cancer, two NCAA investigations and a scandal involving former assistant coach Bernie Fine, who was accused of molesting two ball boys but never charged.

As for Saturday's game, Syracuse (18-8, 9-4 Atlantic Coast Conference) will likely break the all-time attendance record for an on-campus men's basketball game — the Orange attracted 34,446 twice against Duke in the Carrier Dome.

Because of the accident, ESPN decided not to bring its "College GameDay" show to the Carrier Dome as planned, and freshman forward Zion Williamson of Duke (23-3, 11-2) is listed as day to day as he recovers from a knee sprain that occurred when his shoe ripped apart earlier in the week.

Williamson, a top contender for national player of the year, was hurt on the first possession of the Blue Devils' loss at home on Wednesday night to No. 8 North Carolina. Williamson grabbed the knee in pain after slipping awkwardly and falling when his left Nike shoe tore apart as he planted hard while dribbling near the free throw line.

According to the school, Williamson is progressing as expected. If he doesn't play, Duke will miss his average totals of 21.6 points and 8.8 rebounds per game, as well as his imposing presence on defense. The Blue Devils, who lost at home to Syracuse in overtime last month without stars Cameron Reddish and Tre Jones, are getting ready for any scenario.

"Obviously, he's a big part of our team, but we can't let his absence kind of deflate us," junior forward Jack White said. "Guys have to step up and guys have to know that each one of us has confidence in one another.

"It's nothing you can really prepare for. It's just one of those things and how the game goes. I just hope that we can get him back out on the court as soon as possible and get him healthy."