Oregon State at Arizona highlights the week in the Pac-12 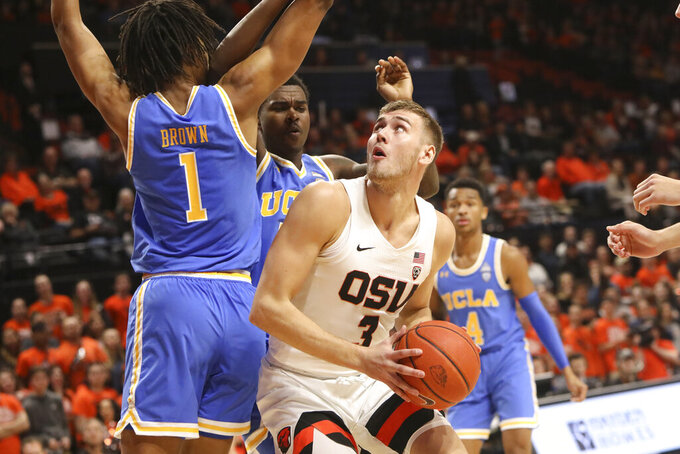 Oregon State's Tres Tinkle looks for a path to the basket past UCLA's Moses Brown during the first half of an NCAA college basketball game in Corvallis, Ore., Sunday, Jan. 13, 2019. (AP Photo/Amanda Loman)

GAME OF THE WEEK: Oregon State at Arizona, Saturday. The Wildcats and Beavers had some bumps in the nonconference road, but find themselves atop the Pac-12 with Washington. Arizona (13-4) leads the conference at 4-0 and Oregon State (11-4) is 3-0 for its best conference start since 1992-93. If both get through their first games this week, Saturday at McKale Center could be for first place.

LOOKING AHEAD: Washington (12-4) opens the week against Stanford on Thursday and plays California on Saturday in its bid to remain atop the Pac-12. ... The Pac-12's two winless teams in conference meet Thursday, when California (5-11, 0-4) meets Washington State (7-9, 0-3). ... Arizona State has won eight straight meetings against Oregon — fifth longest active in the conference — when the teams meet on Saturday.

INSIDE THE NUMBERS: Oregon State leads the Pac-12 in shooting percentage (.469) and shooting defense (.393). Four teams in conference history have led both categories in a season, last by UCLA in 1995-96. ... The road trip through Arizona has not been swept since 2016-17, the longest stretch in the conference. The Arizona sweep has happened four times since the conference expanded in 2011-12.

PLAYER TO WATCH: Stephen Thompson, Jr., Oregon State. The Beavers' senior averaged 25.5 points, 8 rebounds and 5.5 assists in victories over USC and UCLA. He made 17 of 34 shots and had a career-high 34 points, 10 rebounds and five assists against USC.

ON THE WOMEN'S SIDE: No. 19 Arizona State has a tough two-week stretch going, facing No. 5 Oregon and No. 10 Oregon State on the road this week after playing No. 6 Stanford and No. 24 Cal last week. . ... Stanford coach Tara VanDerveer needs two wins to reach 900 at The Farm. The Cardinal host the Washington schools this week. ... Stanford's Alanna Smith was named the Pac-12 player of the week after averaging 22.5 points and 10 rebounds in wins over the Arizona schools.