Badgers try to bounce back from bad news with Spartans next 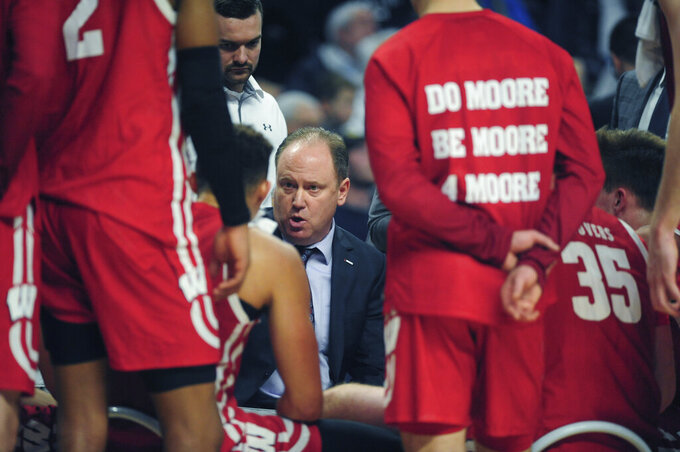 Wisconsin coach Greg Gard talks to his players during a time out late in the second half of an NCAA college basketball game with Penn State, Saturday, Jan. 11, 2020, in State College, Pa. (AP Photo/Gary M. Baranec)

MADISON, Wis. (AP) — Wisconsin coach Greg Gard got a phone call from Michigan State’s Tom Izzo, a few hours after the Badgers got rocked with a couple unpleasant surprises.

Kobe King, the second-leading scorer at Wisconsin, announced Wednesday that he intends to transfer two days after not traveling with the team to a game at Iowa.

A few hours later, the Big Ten Conference suspended Brad Davison for one game for a flagrant foul he committed late in the Badgers’ loss against the Hawkeyes. Davison will not play against No. 14 Michigan State at home Saturday and he was also reprimanded for violating the league’s sportsmanship policy.

It was more bad news in a tough season for Gard and the Badgers (12-9, 5-5 Big Ten), who have lost two straight with the first-place Spartans up next.

Gard, who has been Wisconsin’s head coach for four seasons, has a relationship with Izzo that stretches back decades and the two have deep respect for each other.

“He called me late last night,” Gard said Thursday. “I’ve been reached to (by) other elder statesmen in the profession, and it’s good to hear their thoughts, experiences and opinions on a variety of topics.”

The King departure is a perplexing situation, given the timing. Gard and junior D’Mitrik Trice said they were still processing the departure.

Trice said that King’s disappointment came to the fore Jan. 24 during the Badgers’ 70-51 loss at Purdue. King didn’t score in 27 minutes, and had four assists, two rebounds and two turnovers.

Trice talked with King, who was upset following the setback, but said Wisconsin players were stunned with King’s decision to take a leave of absence one day later.

“You could see some frustration, especially during the Purdue game,” Trice said. “You could physically see that. He was kind of physically crying, and tears were coming down his face during halftime, and even after the game.

“Everybody was shocked and a little bit confused. .. At the end of the day, it was really his decision.”

Gard said King’s decision to leave was his alone, and that he will “love the kid like one of my own.”

He said that remains confident his team will bounce back.

“You go through a season one day at a time, and you keep trying to get better every day, Gard said. “That’s why sports are such a great teacher of life, because you have to go through ups and downs, and adversity.”