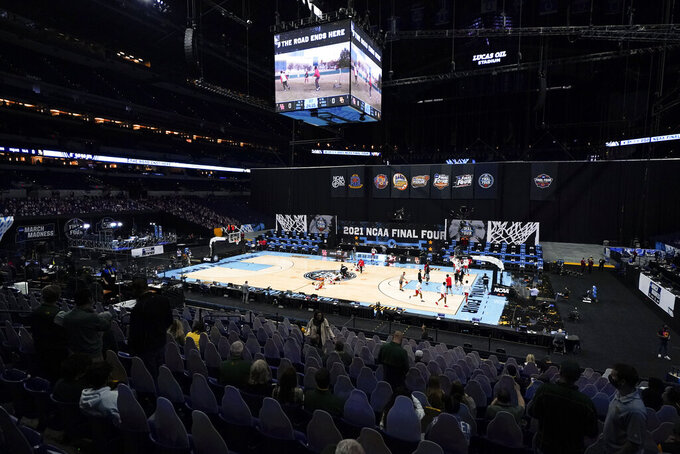 INDIANAPOLIS (AP) — The Latest from the Final Four (all times EDT):

Gonzaga has given fans the NCAA championship game they wanted with a shot for the ages.

Jalen Suggs banked in a shot from near midcourt at the buzzer, giving the heavily favored Zags a 93-90 overtime victory against upstart UCLA.

Gonzaga, the No. 1 overall seed, will play second-seeded Baylor for the title Monday night. Those teams were 1-2 in The Associated Press Top 25 most of the season. The Bears manhandled Houston 78-59 in the other national semifinal.

Johnny Juzang scored 31 points for UCLA, including a tying basket with 3.3 seconds left. But Suggs took the inbound pass, dribbled just past midcourt and launched the shot. It banked in after the buzzer sounded.

Gonzaga is 31-0 and the first team since Indiana State in 1979 to carry an undefeated record into the national title game. Indiana was the last undefeated champion in 1976.

Gonzaga's undefeated season hangs in the balance in overtime against UCLA.

The heavily favored Zags went to OT with an 81-81 score after the Bruins' Johnny Juzang was called for charging on a drive with 1.1 seconds remaining. Gonzaga's inbound pass was intercepted.

There were 19 lead changes and 13 ties in regulation. The last tie came on two free throws by UCLA's Jaime Jaquez Jr. with 43 seconds to go.

Waiting in the title match is Baylor, which defeated Houston 78-59 in the earlier semifinal.

Gonzaga can't quite shake UCLA in the national semifinals.

The heavily favored Zags were up 69-67 at the under-8-minute media timeout after taking biggest lead at 66-59.

The upstart Bruins stayed close thanks to Tyger Campbell. He had a 3-pointer, then hit another bucket to cut the deficit to a pair.

Campbell has 15 points while Johnny Juzang leads UCLA with 19. Gonzaga's Joel Ayayi has 20 points on 8-of-9 shooting.

It was a big day for Nembhard family — and that was before Andrew Nembhard played for top-seeded Gonzaga in the Final Four.

The younger Nembhard won his tournament title in plenty of time to watch Andrew and the Zags face UCLA in the national semifinals.

Andrew Nembhard scored four points in the first half as the heavily favored Zags were in a tight duel with the upstart Bruins. Gonzaga entered the game with a 30-0 record and led 45-44 at halftime.

Ryan Nembhard has signed with Creighton.

UCLA is going toe-to-toe with Gonzaga at the Final Four. The Bulldogs, trying to keep their undefeated season going, have a 45-44 lead at halftime.

It was a wild first half, featuring 11 lead changes and six ties. The upstart Bruins led most of the way before Corey Kispert hit a 3-pointer in the final seconds.

Joel Ayayi leads top-seeded Gonzaga with 16 points and Johnny Juzang played all of the first 20 minutes and has 15 for UCLA, which is the fifth 11th seed to make the Final Four.

Gonzaga brought a 30-0 record into the game and is trying to become the first team since Indiana State in 1979 to carry an undefeated record into the national title game.

Waiting there is Baylor, which defeated Houston 78-59 in the earlier semifinal.

UCLA is hanging with heavily favored Gonzaga in the national semifinals.

The Zags entered this Final Four with four straight double-digits victories in the NCAA Tournament. The tourney's No. 1 overall seed didn't trail in the previous two.

But the upstart Bruins are hanging tough in the first half with a 27-25 lead at the under-8-minute media timeout.

The 11th-seeded Bruins have tried to shorten the game by slowing the pace and as a result have already led for nearly half of the first 11 minutes.

But as player after player and coach after coach has warned throughout the tournament, taking just one play off — any play — could lead to one of Gonzaga’s trademark runs.

The Bruins also could get a boost from their fans, who have been noticeably louder during the first half.

Tyger Campbell leads UCLA with nine points. Joel Ayayi is perfect from the field (5 of 5) and has 13 points.

UCLA has the early edge over No. 1 Gonzaga as Baylor awaits its opponent in the NCAA championship game.

The 11th-seeded Bruins are up 10-9 at the first media timeout. Jaime Jaquez Jr. put UCLA in front with a 3-pointer.

Joel Ayayi scored the first seven points for the Zags, heavy favorites against the Bruins as they try to get within a victory of being the first undefeated national champion since Indiana 45 years ago.

Baylor has cruised into the NCAA championship game and will wait to see if No. 1 Gonzaga can provide the much-anticipated final.

Jared Butler didn't score in the second half, but the second-ranked Bears didn't need any more points from their All-American guard after he scored 17 to help them take a 25-point halftime lead in a 78-59 victory over Houston.

Gonzaga, the tournament's No. 1 overall seed, plays 11th-seeded UCLA in the late game.

It's the second trip to the championship game for Baylor. The other was in 1948, when the Bears lost to Kentucky 58-42. This is Baylor's first trip to the Final Four since 1950, when only eight teams were in the tournament.

Baylor hasn't even needed help from All-American guard Jared Butler in the second half while cruising toward a trip to the national championship game.

The Bears have kept the lead around 20 points most of the second half in the first trip to the Final Four since 1950 after leading by 25 at halftime behind 17 points from Butler.

Butler is scoreless since the break, but two teammates have joined him in double figures. Matthew Mayer went into the final media timeout with 12 points. Jonathan Tchamwa Tchatchoua had 11 points and was tied for the team lead with Butler with five rebounds.

Health officials in Indiana say they are investigating whether anyone was exposed to COVID-19 by Alabama residents following Friday night’s reported death of a Crimson Tide fan who was in Indianapolis for the NCAA Tournament last weekend.

Marion County officials say in a statement provided to the NCAA they are investigating possible exposure based on an Alabama newspaper report that cited multiple sources it didn't identify in reporting 23-year-old Alabama student Luke Ratliff died of complications related to COVID-19.

Bryan Ratliff tells The Tuscaloosa News his son died after a brief illness. The elder Ratliff could not immediately be reached for comment Saturday by The Associated Press.

The younger Ratliff was hospitalized shortly after returning to Tuscaloosa on March 29, one day after attending Alabama’s game against UCLA at Hinkle Fieldhouse in Indianapolis, the News reported.

Fans are showing up in team colors, parking attendants are waving signs encouraging drivers to turn in and there are lines at souvenir shops.

Inside, it hasn't been anywhere close to normal at the Final Four.

Only a few thousand watched the first national semifinal between Baylor and Houston instead of the usual tens of thousands. And with the Bears taking control early and still holding a 20-point lead early in the second half, they've been mostly quiet.

The seats closest to the court are filled primarily with cardboard cutouts behind the baselines and a large sign over the sideline that the read “The Big Dance.” Instead of the traditional pep bands playing through timeouts, songs echo off the metal and concrete stadium.

Jared Butler is more than halfway toward a career high with 17 points, just about everyone else wearing a Baylor uniform has found nothing but the bottom of the net, and the Bears lead Houston 45-20 at halftime of their national semifinal.

Butler is 6 of 8 from the field, hitting four 3-pointers, to give the Big 12 champions a big cushion in their first Final Four appearance since 1950. Butler had 11 points during a 16-3 run late in the half that cracked open the game.

The Bears are 8 of 15 from beyond the arc and shooting 57% overall against the nation’s second-best scoring defense.

Marcus Sasser is doing his best to keep Houston in the game, hitting five 3-pointers and scoring 17 himself. But the rest of the Cougars are 1 of 15 from the field.

That includes All-American guard Quentin Grimes (0-5) and DeJon Jarreau (1-7), the most valuable player of the Cougars’ tournament region.

So far, Marcus Sasser is carrying the Houston offense. And the defense is struggling to slow Baylor.

The sophomore guard has 15 points on 5-for-9 shooting, with each made shot coming from behind the arc. But the rest of the team has started 1 for 11 and has just two points.

Sasser had struggled in the past three tournament games with his shot, making 11 of 43 attempts and 7 of 27 3-pointers.

More alarmingly, Houston’s defense that had held every tournament opponent to 61 points or less allowed Baylor to shoot 58% and make 6 of 12 3-pointers. The Bears led 33-17 near the 5-minute mark of the first half.

The first NCAA Tournament semifinal has tipped off in Indianapolis between two Texas teams that have Indiana connections.

It’s only the third time that two teams from the same state have squared off in the Final Four, the last being Louisville and Kentucky in 2012.

Students from six Indiana schools sang the national anthem before the tip.