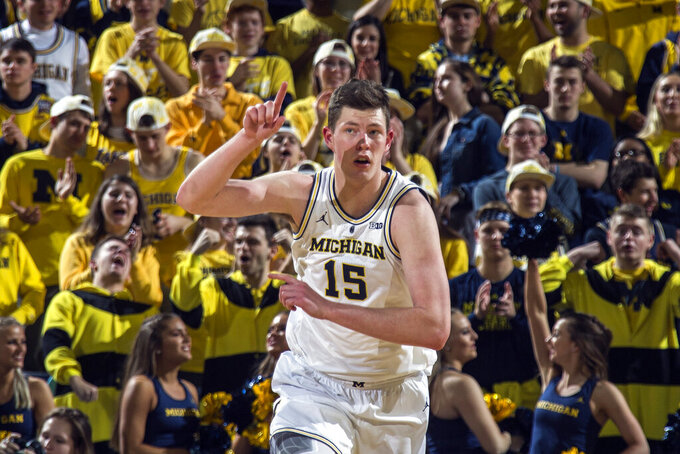 Michigan center Jon Teske (15) reacts after making a basket in the first half of an NCAA college basketball game against Northwestern at Crisler Center in Ann Arbor, Mich., Sunday, Jan. 13, 2019. (AP Photo/Tony Ding) 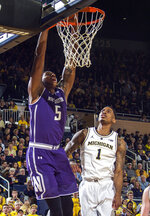 When they suddenly start making 3-pointers as well, there's not much an opponent can do.

Simpson scored a career-high 24 points and Teske tied a career high with 17, leading No. 2 Michigan to an 80-60 victory over Northwestern on Sunday night. Simpson made five 3-pointers and Teske made three. With the win, the Wolverines are off to their best start in program history.

"We've had some great teams, and I hate comparing great to great," Beilein said. "But I do say that this team has the capacity — if we get that out of those two, I wouldn't like to guard that."

Before Sunday, Teske had made five 3-pointers in 77 games at Michigan. Simpson had shot 28 percent beyond the arc over his 2½ seasons with the Wolverines. They made eight of Michigan's 11 3-pointers on Sunday.

"We were going to live with some Simpson 3s and some Teske 3s," Northwestern coach Chris Collins said. "Give those guys credit."

Northwestern (10-7, 1-5) was without leading scorer Vic Law, who was out with a lower-body injury. The Wildcats lost by two to the Wolverines last month — one of only two Michigan games this season decided by single digits — but this one was no contest.

Simpson's hook shot off the glass gave the Wolverines an early 10-0 lead, and although Northwestern quickly battled back to within two, the game didn't stay close for long. Michigan made 13 of its final 16 shots from the field in the first half and led 50-28 at halftime.

The Wolverines have matched the longest winning streak in school history. They won 17 in a row in 1985 before losing in the NCAA Tournament.

Michigan and Virginia are the only unbeaten teams remaining in Division I.

Northwestern: The Wildcats had a real chance to beat Michigan at home in December, but with Law out of action, they couldn't keep it close Sunday and maybe shouldn't have been expected to.

Michigan: The Wolverines have won 31 of their last 32 games, with the only loss coming to Villanova in last year's national title game. They are a terrific defensive team, and they have plenty of ways to score as well. Michigan becomes even harder to beat when getting unexpected scoring from players like Teske and Simpson.

Collins said he had a feeling Saturday that Law wouldn't be able to play, and the team prepared to play without him.

"Vic is a very big part of our team, and he brings that element to the game that we don't have when he's not on the floor," Pardon said. "But it was good for some of our freshmen and some of our young guys to get in there, mix it up in a high-level game like that to improve for the rest of the season."

Simpson's shooting was a liability in the first matchup with Northwestern, when he went 0 for 5 from 3-point range. He was ready this time .

"They were sagging off him," Teske said. "They were daring him to shoot, and he did."

Top-ranked Duke won on a last-second shot Saturday, so Michigan will likely stay at No. 2.

Northwestern: The Wildcats play at Rutgers on Friday night.

Michigan: The unbeaten run should get a real test when the Wolverines play at Wisconsin on Sunday.