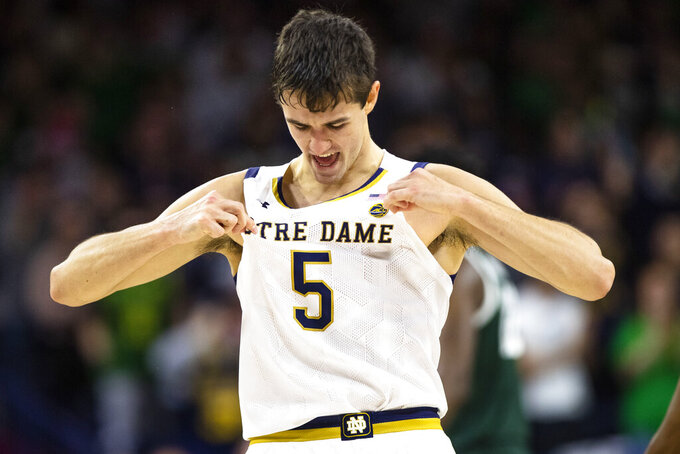 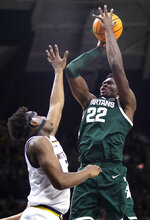 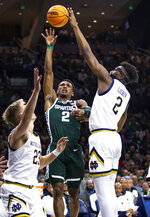 SOUTH BEND, Ind. (AP) — Cormac Ryan scored 20 of his 23 points in the first half as Notre Dame cruised to a 70-52 win over No. 20 Michigan State on Wednesday night in the ACC/Big Ten Challenge.

Ryan went 6-of-7 on 3′s, missing his last one to keep him from tying a school single-game record for most triples without a miss. He helped the Fighting Irish (6-1) jump out to a 42-24 halftime lead.

“I think we were due for one, all of us,” Ryan said of veteran-heavy Notre Dame shaking off some early-season close calls and then a loss in its last outing. “We have guys who are too good at playing the right way. I think we were still kind of finding ourselves and we picked a good night to figure it out.”

JJ Starling added 14 points and Dane Goodwin 12 for the Irish, who led 39-16 by the 4:33 mark of the first half and didn’t commit their first turnover until more than 17 minutes into the game.

“We played right on both ends of the floor for 40 minutes,” Notre Dame coach Mike Brey said. “I thought our defense was fabulous and really kind of set the tone for us, and then we made big shots.”

The Spartans (5-3) were paced by A.J. Hoggard with 15 points. Joey Hauser and Tyson Walker added 12 apiece.

“We could use the excuse that we’re tired,” said Michigan State coach Tom Izzo, whose club had just played three games in four days Thursday through Sunday at the Phil Knight Invitational in Portland, “but I really don’t think it’s got anything to do with not getting back (on defense). They smashed us in the mouth. They deserved what they got. They played harder than we did.”

Michigan State: In their first true road test, to go with five neutral-site games, the Spartans faltered, appearing far less energetic than the hosts. Regardless, they’ve shown plenty of promise early in the season with a double-overtime win over then-No. 4 Kentucky and a one-point loss to then No. 2-Gonzaga. Without senior forward Malik Hall — expected to be out another two-plus weeks due to a stress reaction in his left foot — Michigan State has slipped of late, though, going 2-2.

Notre Dame: The Irish, coming off a 63-51 loss to St. Bonaventure on Friday, delivered an authoritative bounce-back. Michigan State represented potentially Notre Dame’s only opportunity outside of conference play to take down a ranked team. The win moved the Irish to 4-30 against rated opponents over the last five-plus seasons.

Brey expressed optimism that grad transfer guard Marcus Hammond will return to full practice this week and be ready to play Saturday.

Hammond, who averaged 18.1 points last season at Niagara on his way to all-conference honors for a third time, has been out since suffering a sprained knee ligament in preseason.

Without Hammond, the Irish have been relying on a rotation of just six players.

For the Spartans, Izzo indicated that sophomore guard Jaden Akins could be back soon.

Like Hall (12.0 points per game), Akins (6.8 off the bench) has missed the last four games with a foot injury.

DEATH IN THE FAMILY

Walker played despite finding out during the Spartans’ pregame meal that “a close family member died,” according to Izzo.

The coach did not specify who the family member was.

“He went through the pregame in tears,” Izzo said of Walker, who headed into the night averaging a team-leading 15.6 points. “We’ll get through that and he’ll play better.”