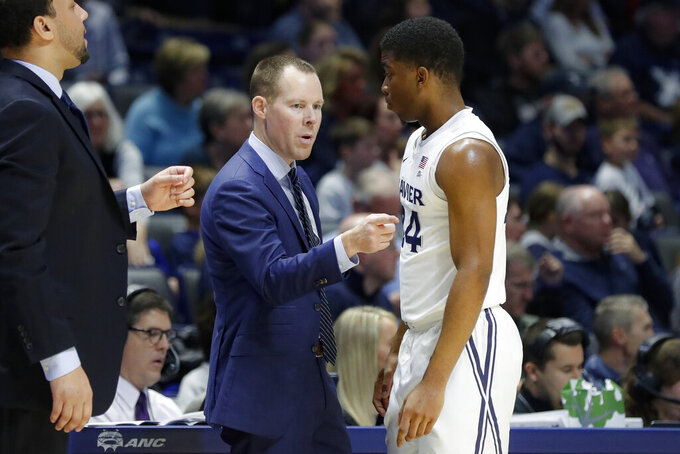 CINCINNATI (AP) — For the first time this season, No. 25 Xavier got to use its entire bench.

Tyrique Jones had his fourth double-double of the season, Paul Scruggs scored 15 points, and the Musketeers recovered from their first loss by beating Lipscomb 87-62 Saturday.

The Musketeers (7-1) were coming off a 70-65 loss to Florida in the championship game of the Charleston Classic. Jones averaged 14 points and 10 rebounds during the tournament and kept up his dominance back at home.

Jones finished with 14 points and 10 rebounds, leading a surge late in the first half that put Xavier in control. Naji Marshall scored nine consecutive points for Xavier in the second half and finished with 13 as the Musketeers piled up a season high in points.

“I’d say it was a step forward for the team,” said freshman forward Zach Freemantle, who had a career-high 15 points. “We hit some shots and we’d been struggling a little bit.”

The Musketeers got two freshmen on the court after they missed the first six games with injuries. Guard KyKy Tandy hit his first shot — a long 3 — and went 2 of 7 for five points in 13 minutes. Forward Daniel Ramsey hit his only shot in three minutes.

“It was kind of awkward, after being out so long,” said Tandy, who missed a month with a foot injury.

Coach Travis Steele had his reserves on the court together in the second half after Xavier pulled ahead by 21 points.

“We’ve been dinged up since the preseason,” Steele said. “That makes it hard to find your rhythm, especially on the offensive end. We’ve got to learn what lineups work, what doesn’t work, but it’s nice to have that depth.”

“We wore down,” Lipscomb coach Lennie Acuff said. “Our youth and their physicality were too much for us."

The Musketeers took a while to settle in against Lipscomb’s zone defenses. They repeatedly missed layups and shot air balls on 3-point attempts in the opening minutes, allowing the Bisons to stay close. Xavier led by no more than five points until Jones asserted himself and the Musketeers began dominating inside.

The senior forward had a put-back, a tip-in and a steal and dunk as Xavier made eight of its last 10 shots in the half to open a 40-26 lead. Scruggs added six points during the spurt.

Jones scored Xavier’s first two baskets of the second half, helping the Musketeers push the lead to 21 points. Xavier was in control the rest of the way, using its reserves liberally.

Xavier’s first loss of the season dropped the Musketeers from No. 18 to No. 25, leaving no margin for error to stay ranked. They got the win despite an out-of-sync first half that include nine turnovers.

Lipscomb: The Bisons played their first ranked team this season.

Xavier: The Musketeers’ outside shooting — their biggest weakness — was in the spotlight against Lipscomb’s zone defense. The Musketeers came in making 27.7% of their 3-point attempts and went 8 of 24 from beyond the arc.

Lipscomb had won its last two road games. The Bisons are 2-3 on the road this season.

Only 25 fouls were called and the teams combined for 24 free throws. The game was over in an hour and 48 minutes.

Xavier improved to 263-41 at the Cintas Center.

Lipscomb completes a four-game road swing at Belmont on Tuesday.