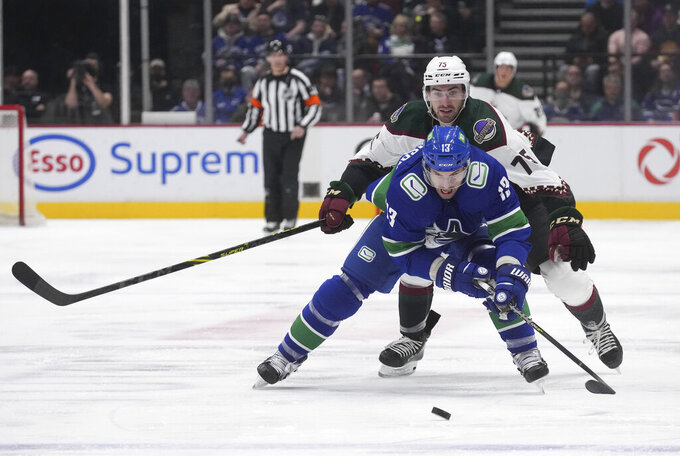 VANCOUVER, British Columbia (AP) — J.T. Miller is focusing on one goal: getting the Vancouver Canucks into the playoffs.

Miller had a career-high five assists and the Canucks extended their winning streak to five games with a 7-1 win over the Arizona Coyotes on Thursday night.

With the win, the Canucks kept alive their faint playoff hopes. Vancouver is five points behind the Nashville Predators and Dallas Stars, who hold the two Western Conference wild-card spots.

“I try to feel like I’m never satisfied,” said Miller, who has 91 points (29 goals, 62 assists) this season. “I’ve got an amazing opportunity since I’ve been here, I’ve got to play in every situation, which is something I’ve worked for my whole career.

Andrew Ladd scored for the Coyotes (22-47-5), who lost their fifth straight. Karel Vejmelka stopped 16 of 22 shots before being replaced by Harri Sateri at the start of the third period. Sateri made four saves in relief.

Despite the final score, Arizona head coach Andre Tourigny said he liked the way his group played in the third period.

“I think we showed more pride in the third period,” he said. “For me, that’s our team. That’s the way we have to fight. We talked about it before the game and we got better on that, so that’s a positive.”

It was the third game in a row that Vejmelka gave up six goals.

“NHL for me is full of slumps,” Tourigny said of the netminder. “You need to be able to react to a slump. If you cannot get out of a slump in the NHL, you’re in trouble. You will be a streaky player. NHL is not about that. It’s about being good every day. It’s about consistency.

Vancouver lost a key piece early in the second period when Bo Horvat took a shot from Anton Stralman off the inside of his right ankle. He went directly to the locker room and did not return to the game.

Head coach Bruce Boudreau said he thinks the Canucks' captain will be OK and he’s hoping to have him in the lineup on Monday when Vancouver hosts the Dallas Stars.

Horvat came into Thursday's game riding a five-game point streak in which he has five goals and three assists.

NOTES: Garland is on a five-game point streak with two goals and five assists … The Canucks swept the three-game season series between the teams.

Coyotes: At Calgary on Saturday night.