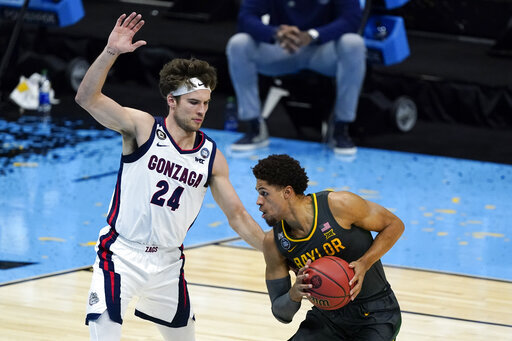 INDIANAPOLIS (AP) — The Latest on the national championship game between Baylor and Gonzaga (all times local):

Baylor is on top of the college basketball world, winning its first national championship while denying perfection for Gonzaga.

All-American guard Jared Butler had 22 points and seven assists for the Bears in 86-70 victory Monday night. His backcourt mates did plenty as well.

MaCio Teague had 19 points and Davion Mitchell 15 for the Bears. Adam Flagler, a guard who will be back next season, added 13 points, and fifth-year senior Mark Vital had 11 rebounds. Baylor ended the season at 28-2.

Freshman Jalen Suggs had 22 points for Gonzaga, which finished 31-1.

Indiana is still the last undefeated national champion, back in 1976.

Suggs, who banked in a game-winning 3-pointer from just inside half court in overtime to beat UCLA in the national semifinal game, scored 15 of his points in the second half. Drew Timme and Corey Kispert each finished with 12 points for the Zags.

The Bears from the Big 12 raced out a 9-0 lead in the game’s first 2 1/2 minutes and never trailed. They led by 19 midway through the first half, the largest deficit Gonzaga had faced all season, and it was as many as 20 points after halftime even after the Zags got back within single digits briefly.

Butler is the first player in a national championship game with at least 20 points and seven assists since Carmelo Anthony for Syracuse in 2003.

Baylor’s big men are in foul trouble in the national championship game, but the Bears extended their lead again with both of them on the bench.

Flo Thamba and Jonathan Tchamwa Tchatchou, the interchangeable bigs, both have four fouls with just under 12 minutes left.

With both big guys out of the game, Gonzaga initially cut the score to 58-49 with 14:29 left. That was first time the Zags had cut their deficit to single digits since it was 13-4 less than five minutes into the game.

But block by Mark Vital, who can play pretty much any position for Baylor, led to a fast-break 3-pointer for the Bears that put them up 67-53.

Jared Butler hit 3-pointers on Baylor's first two shots after halftime, and the Bears are still up by double figures in search of their first national championship.

Undefeated Gonzaga is shooting 55%, but is down 56-45 at the first media timeout of the second half.

Jalen Suggs, the freshman standout for the Zags, has six points already in the second half after seven before halftime.

Butler has four 3s in the game and is the top scorer with 16 points.

Baylor still has a double-digit lead at halftime after undefeated Gonzaga's strong finish to the first half in the national championship game.

MaCio Teague has 14 points and All-American guard Jared Butler has 10 for the Bears, who are up 47-37. They have led throughout since scoring the game's first nine points.

A 3-pointer by Teague midway through the first half put Baylor up 29-10, a 19-point lead the Bears matched two other times before the break. That is the largest deficit Gonzaga has faced all season while winning its first 31 games.

Jalen Suggs, whose banked 3-pointer in overtime pushed the Zags passed UCLA in the national semifinal Saturday night, had a three-point play in the final minute in a 9-2 run over the final two minutes of the half against Baylor.

There are about 8,000 fans inside Lucas Oil Stadium and the overwhelming majority of them are rooting for Baylor.

The Bears are certainly giving them plenty of reasons to cheer.

Even though they've cooled off a bit from the field, they are still matching Gonzaga bucket-for-bucket as the national title game approaches halftime. One big advantage for the Bears is their depth: They've already gotten eight points from backup guard Adam Flagler while the Bulldogs have yet to get anything from their bench.

Baylor continues to dominate overall No. 1 seed Gonzaga in the national championship game.

The Bears hit their first 5 3-pointers, have caused the Bulldogs all kinds of problems on defense and roared to a 29-10 lead — the biggest deficit faced by Gonzaga during its bid for a perfect season. The Bulldogs have since scored a couple of buckets, but they still trail 31-14 at the under-8 media timeout.

Fouls are suddenly a big problem for Gonzaga, too. Jalen Suggs already has spent time on the bench with two fouls; he's twice fouled out of games this season and finished with four fouls in four other games.

Baylor has raced to an 11-1 lead at the first media timeout of the national championship game, continuing the red-hot shooting that carried the Bears to a blowout victory over Houston in the semifinals.

Davion Mitchell already has seven points and Mark Vital has three offensive boards for the Bears.

Gonzaga has missed its first three shots, committed two turnovers and got its only point after Andrew Nembhard made the second of his two free throws. The Bears have turned both of those turnovers into points.

There are no surprises in the starting lineups for Baylor and Gonzaga in the national championship game.

The Bears will go with their dynamic backcourt of All-American guard Jared Butler, defensive player of the year Davion Mitchell and sharp-shooter MaCio Teague. Mark Vital and Flo Thamba will patrol the paint for them.

The Bulldogs will counter with Jalen Suggs, whose buzzer-beating 3-pointer in overtime sent them past UCLA in the semifinals, alongside fellow guards Andrew Nembhard and Joel Ayayi. All-American forward Corey Kispert and Drew Timme, who also had a monster game against the Bruins, will round out the starters.

The game officials will be Bo Boroski, Keith Kimble and Randy McCall.

Among the first through the door for Baylor’s first national title shot since 1948 were Homer Drew and Bryce Drew.

Homer, the longtime coach of Valparaiso, is the father of Bears coach Scott Drew, who got his start as his dad’s assistant with the Crusaders. Bryce is the younger brother that hit one of the most memorable shots in NCAA Tournament history, a buzzer-beating 3-pointer that gave No. 13 seed Valpo a win over Ole Miss in the 1998 tourney.

Bryce, whose Grand Canyon team lost in the opening round of this year’s tournament, was repping Baylor with a black shirt bearing the Bears' logo. Homer went with a Valpo-yellow collared shirt and black jacket.

Fans are beginning to trickle into Lucas Oil Stadium for the national championship game between Baylor and Gonzaga, the overall No. 1 seed of an NCAA Tournament that has been played entirely in Indianapolis and the surrounding area.

The teams were supposed to meet four months ago to the day in Indianapolis. But their highly anticipated showdown between teams ranked No. 1 and 2 in the country was canceled about two hours before tip, when an outbreak of COVID-19 within the Bulldogs program forced them to halt all team activities.

Fortunately, there have been no COVID-19 issues since an early positive test caused VCU to withdraw before the tournament began. And that leaves basketball fans with a matchup of two teams that spent the entire season ranked in the top three in the AP Top 25. The Bulldogs went wire-to-wire at No. 1 and Baylor was right behind all but a couple weeks.