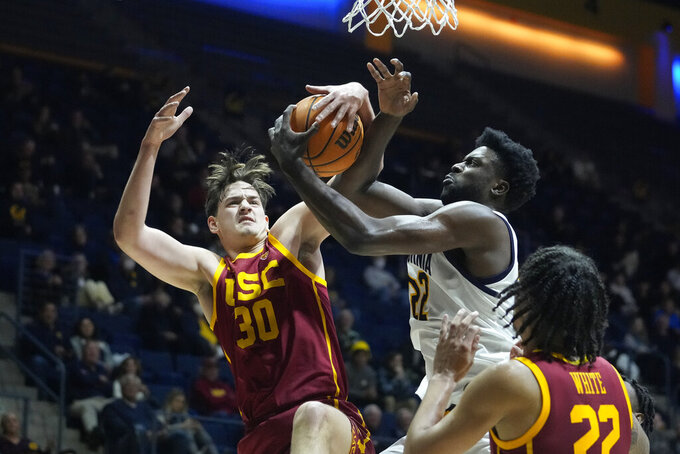 Southern California forward Harrison Hornery (30) and California forward ND Okafor (22) compete for a rebound during the first half of an NCAA college basketball game in Berkeley, Calif., Wednesday, Nov. 30, 2022. (AP Photo/Godofredo A. Vásquez) 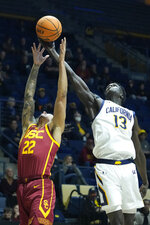 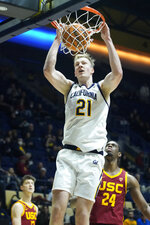 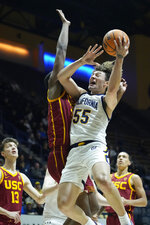 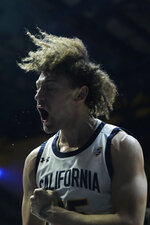 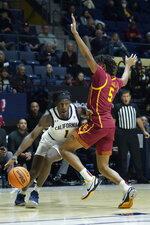 BERKELEY, Calif. (AP) — Reese Dixon-Waters scored 10 of his career-high 17 points in a 20-0 run in the second half that lifted Southern California to a 66-51 win over California in the Pac-12 Conference opener Wednesday night.

The Trojans (5-3) were clinging to a 46-43 lead midway through the second half when Dixon-Waters made a pair of free throws to start the barrage. He added a three-point play and a 3-pointer 28 seconds apart as the run reached 10 and the lead was 56-43 at the 7:21 mark.

Joshua Morgan capped the run with a jumper before Devin Askew scored for the Golden Bears to end a drought of 10 minutes. The Bears missed 11-straight shots in what was just a horrible shooting night for the home team.

Morgan and Drew Peterson both added 14 points for the Trojans. Morgan also contributed to Cal's shooting problems with six blocks.

Askew had 23 points for the Golden Bears (0-8), who did not get a point from their bench.

USC had a 10-0 run that made the score 14-2 at the midpoint of the first half. Cal missed its first eight shots and was 1 for 18. After making three quick buckets, the Golden Bears missed another eight straight. But the Trojans also missed eight straight and finished the half by making just one of 11 shots.

Cal was back in the game because of free throws, going 7 of 8 in the last 3 1/2 minutes. The Golden Bears stayed in the game behind Askew until the back-breaking dry spell.