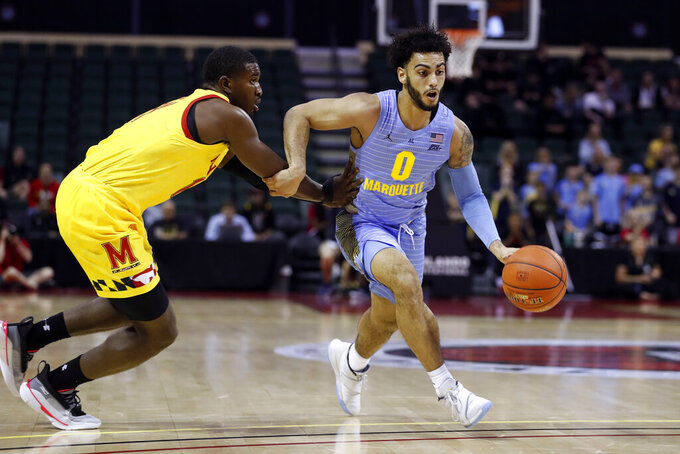 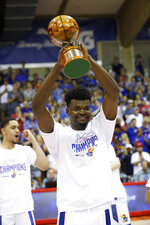 PARADISE ISLAND, Bahamas (AP) — Udoka Azubuike patrolled the paint with a dominating edge to help No. 4 Kansas win the Maui Invitational. Jon Teske offered a similar space-eating presence for Michigan during its unexpected title run in a loaded Battle 4 Atlantis.

The seniors showed the college basketball world not to overlook experienced big men amid all the attention on high-flying wings and sharp-shooting guards.

Entering Maui, one question about Kansas (6-1) was how well it could play with two big men on the court and Azubuike’s effectiveness against quality opponents with his shooting range limited to within a few feet of the rim.

Yet the 7-foot, 270-pound senior, when not in foul trouble, often dominated.

The highlight came against Dayton in the championship game, where Azubuike had a career-high 29 points — nine in overtime — while making 12 of 15 shots to end up as Maui’s co-most valuable player with point guard Devon Dotson.

“That’s the best 1-2 punch we have seen maybe with anybody in a while in our program,” Kansas coach Bill Self said.

He was right. Throw in Dotson’s 31 points, and they formed Kansas’ highest-scoring duo in any game since January 1991 while combining to draw 17 of the Flyers’ 25 fouls.

In the Bahamas, the 7-foot-1, 265 pound Teske finished as MVP after the Wolverines (7-0) gave first-year coach Juwan Howard some early marquee wins and an expected spot in Monday’s new AP Top 25 poll.

Teske used his sturdy frame to help negate the sixth-ranked North Carolina’s typically relentless board work while also flustering 6-10 freshman Armando Bacot into an ineffective performance by denying prime post position and forcing him to shoot over Teske’s long arms.

Teske closed with 19 points and a career-best 15 rebounds against eighth-ranked Gonzaga. He also swatted four shots against both UNC and Gonzaga, and hit four 3s during the tournament.

“When I was younger, I knew my role was a backup big and just kind of go in there when it was my time and just help the team win,” Teske said. “That kind of changes as you become older as a junior and senior, and I’ve just got to lead the younger players.”

Here are some takeaways from the Thanksgiving-week holiday tournaments:

Toppin, a 6-9 redshirt sophomore, has developed into one of the nation’s best power forwards with length, athleticism and the ability to match up with anyone by shooting over smaller defenders or pulling bigger ones out to the 3-point arc. He had 18 points, nine rebounds and three blocks against the Jayhawks in the title-game loss. He now ranks among the national leaders in scoring (23.0) and shooting percentage (.697, 53 of 76).

As for Edwards, the 6-5, 225-pound freshman proved he can take over a game regardless of the opponent. The high NBA lottery prospect had a remarkable 33 of his 37 points after halftime in a loss to third-ranked Michigan State, including hitting 7 of 13 3s — several with a defender right on him — to frequently leave people in the intimate Lahaina Civic Center shaking their heads in disbelief.

Fifth-ranked Maryland can trust its defense.

The Terrapins won the Orlando Invitational by slowing high-scoring Markus Howard of Marquette, holding the national scoring leader to six points on 1-for-12 shooting Sunday. That came after Howard went for a tournament-record 40 points in the first-round win against Davidson, then 51 points against Southern California. The preseason Associated Press All-American came in averaging 29.3 points.

Maryland’s Darryl Morsell took the lead on Howard with Aaron Wiggins as the Terps focused on being sharp on defensive switches.

“A kid coming off 51, didn't really need a pregame speech,” Maryland coach Mark Turgeon said. “I knew our guys were going to be locked in today.”

At the Battle 4 Atlantis, the Ducks fell behind by 19 in the second half against No. 13 Seton Hall before rallying for a wild win. They rallied from 17 down early against Gonzaga before losing in overtime. Finally they fell behind by 10 with about 5 minutes left before falling short against UNC.

“You just can’t do that on a consistent basis and have a good ball team,” Oregon coach Dana Altman said.

At the Las Vegas Invitational, the Red Raiders lost twice after falling behind by 15 before halftime against Iowa and by 19 against Creighton.

“I’ve got to figure out a way to coach these guys better, and I will,” Texas Tech coach Chris Beard said.