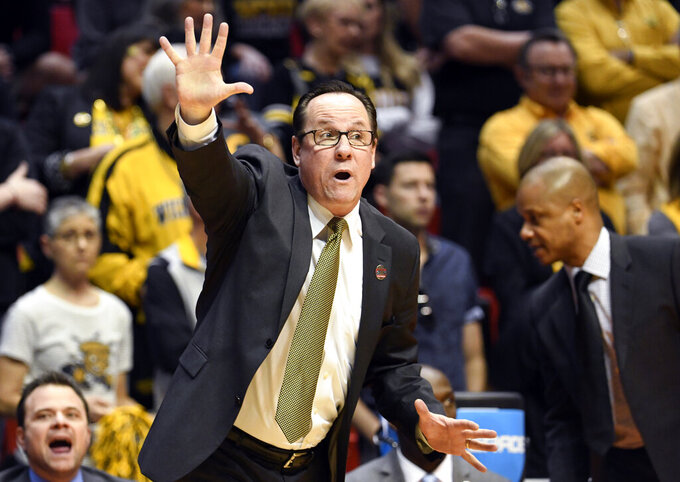 FILE - In this March 16, 2018, file photo, Wichita State head coach Gregg Marshall reacts during the first half of a first-round NCAA college basketball tournament game against Marshall in San Diego. Marshall resigned Tuesday, Nov. 17, 2020, following an investigation into allegations of verbal and physical abuse, ending a tenure that soared to the Final Four and crashed on the eve of the upcoming season. (AP Photo/Denis Poroy, File)

KANSAS CITY, Mo. (AP) — Wichita State coach Gregg Marshall resigned Tuesday following an investigation into allegations of verbal and physical abuse, ending a tenure that soared to the Final Four and crashed on the eve of the upcoming season.

Marshall, who has long been known for his combustible sideline persona, came under scrutiny when former player Shaq Morris claimed he’d been struck twice by his coach during an October 2015 practice. Morris also claimed that he’d seen Marshall choke assistant coach Kyle Lindsted, who soon departed to become an assistant at Minnesota. Marshall denied the claims.

The school said Marshall agreed to a settlement of $7.75 million to be paid over the next six years.

“This was a difficult decision, but one I feel was necessary for my family, the university and, most importantly, the student-athletes,” Marshall said. “I wish to thank the coaches, student-athletes, the university, the community, and all of Shocker Nation for their unending dedication, support and loyalty. I am incredibly proud of this men’s basketball program and all it has achieved over the past 14 years.”

Shockers assistant coach Isaac Brown, who has been with the program since 2014, will serve as interim coach. Their season begins Nov. 25 against Utah State in Sioux Falls, South Dakota.

“I know this is a difficult time for our kids, but we will come together as a team and continue to compete," Brown said. "We have a great group of kids and staff, and we will work hard each day to represent our school and our city.”

Wichita State athletic director Darron Boatright said “the university acknowledges the success of the basketball program under Coach Marshall,” but that it was in the best interest of the program to part ways.

"What the program needs right now is stability,” Boatright said. “Isaac has been here for seven years and has good rapport and relationships with the players and staff. I think he is the natural choice.”

“Many players thrive in the system we have created and are energized by our team culture,” Marshall said soon after the allegations surfaced. “For those players, I am a motivator, a pusher, someone who can tap into their greatest potential. For others, I can be demanding, harsh or strict. I don’t argue with those descriptions.

“What I am not is demeaning or abusive. I have deep respect for all my players,” Marshall added. “I believe unequivocally in their value as athletes, as students and as people. Any portrayal of me to the contrary is wrong.”

The 57-year-old Marhsall was due $3.5 million in base salary this season under a contract that automatically renewed. But his contract also stated he could be fired without payment for “good cause” as determined by the university, such as conduct found to be “inconsistent with the professional standards expected of a head coach of an intercollegiate team that results in material injury to the reputation of Wichita State.”

Several former players have rushed to Marshall’s defense, though most were not on the team when Morris accused him of misconduct. Marshall also had the support of Tom Devlin, the entrepreneur behind Rent-A-Center and a significant booster, along with former players Xavier McDaniel and Aubrey Sherrod, who remain icons within the program.

Marshall was hired to replace Mark Turgeon after nine seasons at Winthrop, where he made seven trips to the NCAA Tournament and won a school-record 194 games. After winning just 11 his first season with the Shockers, Marshall quickly built them into a perennial contender, parlaying their success in the Missouri Valley Conference into an invitation to join the American Athletic Conference prior to the 2017-18 season.

Marshall won at least 20 games in 11 consecutive seasons. Along the way, the Shockers made a stunning run to the Final Four during the 2012-13 season, went unbeaten during the regular season and finished 35-1 the following year. The program wound up sending several players — including Ron Baker and Fred VanVleet — to the NBA.

Things have been bumpier the past few years, though. The Shockers went 22–15 and failed to make the NCAA Tournament two years ago, and a wave of transfers had left the roster in tatters heading into this season.

Marshall quickly rebuilt his roster with an influx of freshmen and transfers, headlined by Connecticut transplant Alterique Gilbert, that had left him optimistic that the Shockers would be contenders again this season.