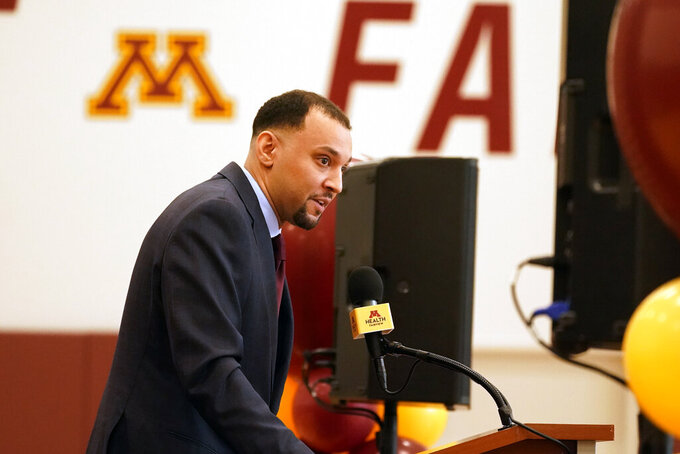 MINNEAPOLIS (AP) — Ben Johnson arrived at Minnesota athletic director Mark Coyle's house already dressed for the job he was there to interview for.

Johnson wore a Gophers pullover, making a strong first impression. His first task as head coach of the men's basketball team will be to persuade more Minnesota kids to put on that maroon and gold.

“We have great high school coaches, great AAU coaches and kids that have a good feel and know how to play basketball, so we’ve got to do our job within the state to keep those guys home,” said Johnson, who spoke at a socially distanced news conference on the team's practice court on Tuesday, two days after he met with Coyle and university president Joan Gabel to present his vision for the program was previously part of as a player and an assistant.

The 40-year-old Johnson was raised in Minneapolis, played for powerhouse DeLaSalle High School and spent two seasons at Northwestern before transferring to the Gophers in 2001. His coaching career took him from Dayton to Texas-Pan American to Northern Iowa to Nebraska to Minnesota, where he was on Richard Pitino's staff for five years. He left for Xavier, where he spent the last three seasons.

When Pitino was fired last week with a 54-96 record in Big Ten play, Johnson quickly found himself on Coyle's short list of potential replacements despite never being a head coach before.

“Every kid within the state, just like me, they need to be looking forward to one day playing at Williams Arena. They need to look forward to trying to become a Gopher and creating that energy and enthusiasm,” Johnson said.

Over five years at his post, Coyle has grown impatient with the lack of traction the program has had during a time when the high school talent in the state has never been higher.

Sure, the best local recruits went to destination programs like Duke or Gonzaga. Still, Colorado (McKinley Wright IV), Texas (Jericho Sims) and Wisconsin (Brad Davison and Nate Reuvers) were among the teams in this season's NCAA Tournament with standout seniors from Minnesota.

“We look around the region and the number of kids that aren’t here. We are going to get them here,” said Coyle, who also had Brian Dutcher (San Diego State), Craig Smith (Utah State), Dennis Gates (Cleveland State) and Ben Jacobson (Northern Iowa) among others on his radar.

Pitino had some key in-state players, of course. Amir Coffey and Daniel Oturu now play for the NBA's Los Angeles Clippers,and Johnson was a major reason why they chose to stay home. Shooting guard Gabe Kalscheur, the current team's best defender, is another homegrown player.

“I’m not worried about the in-game stuff," Coyle said "He knows how to ‘X’ and ‘O’ with anybody. He will learn how to do the timeouts. He will surround himself with a great staff.”

Johnson, who has a $1.95 million annual base salary and a five-year contract, picked patience when asked what he believes his greatest initial challenge will be. He named former Nebraska coach Tim Miles, Jacobson, Steele, Pitino among his many mentors. He then zeroed in on Michigan State's Tom Izzo (26 seasons) and Purdue's Matt Painter (16 seasons) as role models for identity and stability.

“You can tell Purdue players and Michigan State players. That’s going to be our goal. I want our fans to say, ‘That’s a Minnesota dude,’' Johnson said. ”We take a ton of pride in our state and our program, and we’re not going to fail."

Johnson also joins the athletic department at a time when every other head coach of Gophers sports is white. In a report published two weeks by the Star Tribune, Minnesota was found to be the only current Big Ten institution without a school president, athletic director or head coach of color.

Historically, Gophers hoops has been among the Big Ten leaders in that area. Since Wisconsin made Bill Cofield the conference's first Black head men's basketball coach in 1976, Michigan (Juwan Howard, Tommy Amaker and Brian Ellerbe) and Minnesota (Johnson, Tubby Smith and Clem Haskins) are the only programs who've had more than two.

Rutgers has had three Black head coaches over that time, with Eddie Jordan the most recent, but has only been in the Big Ten since 2014. Four teams have never had one. Excluding interim replacements, Johnson's first year will mark the 22nd for the Gophers with Black leadership in the 46 seasons since Cofield's landmark hire. The Wolverines will be next with 13.

“Guys like myself haven't been afforded these opportunities in the past. That’s the elephant in the room, right? Our leadership has stepped up and has provided this platform for myself. Now it’s my job to do the best I can, and hopefully I can open doors for the next guy,” Johnson said. “I have a lot of friends that are very capable coaches. I was fortunate there was a lot of things that fell into place to put me in this position today, and I’m humbled by that, and I realize that. There’s a lot of guys that could be up here. I get that. I don’t think I’m a guy that thinks I have all the answers, but I do know I’m the right guy for this job.”