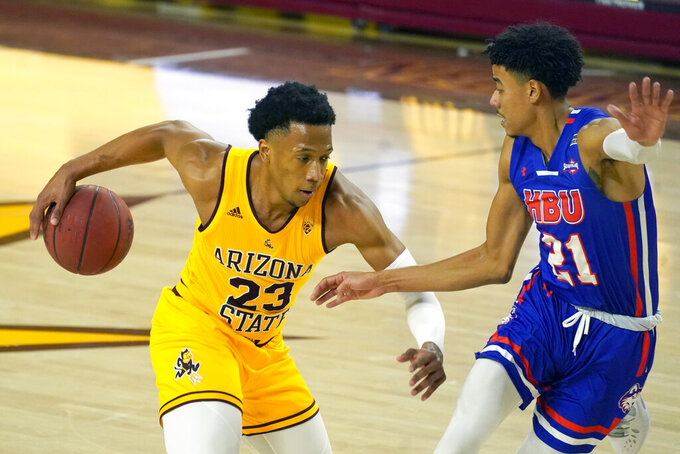 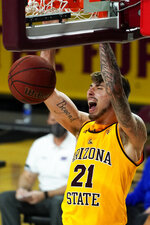 Coming off a bogged-down loss to No. 3 Villanova, the Sun Devils were at their free-flowing best and turned their home opener into a rout.

“The full-court pressure really turned things around for us in the first half and it kind of energized us,” said Arizona State's Kimani Lawrence, who had 13 points after missing the first two games with a knee injury. “We've got a lot quick guards, quick guys, a lot of athletic guys. We've got a lot of depth, so when one guy's tired, it's next man up and it's nonstop."

The Sun Devils (2-1) played without starting guard Alonzo Verge for unspecified reasons in their home opener, but it did little to slow them down against the overmatched Huskies (0-2).

Arizona State was much more crisp offensively than in a loss to Villanova last week, dishing out 21 assists on 36 field goals, and put the game out of reach early with a 33-3 first-half run.

“You saw what we’re capable of doing,” Sun Devils coach Bobby Hurley said. “It was a really solid performance considering we didn’t have one of our scorers. It's not only our firepower on offense, but our activity on defense. in trying to force some tempo, which we were able to do”

The Sun Devils shot 55% and went 12 for 27 from the 3-point arc against the Huskies, who had the nation's worst scoring defense last season. Arizona State was also good defensively until its rotation players came out, forcing 23 turnovers that led to 30 points.

“I thought our guys came out and competed hard to start the game and really played pretty well for the first seven minutes or so, then we hit a stretch and didn’t do a very good job on 3-point defense and let them have some open looks,” Houston Baptist coach Ron Cottrell said. "We just didn’t do a good job running them off the line and that got them going offensively.

The guard-heavy Sun Devils played cohesively in a six-point win over Rhode Island at Mohegan Sun in Connecticut, but were too much one-on-one offensively in a nine-point loss to No. 3 Villanova the second game in Bubbleville.

Arizona State worked out the offensive kinks in practice and took it out on the Huskies.

The Sun Devils scored 12 straight points to build a 15-point lead and kept going, pushing it to 36-15 with their 33-3 run. Arizona State made 10 straight shots and had 17 assists on 23 field goals during the run.

Houston Baptist played better in the second half after a similar slow start in its opener against TCU, a 69-45 loss. The Huskies couldn't replicate it, missing their first eight shots of the second half as Arizona State stretched the lead to 78-31.

Houston Baptist started to find a bit of a rhythm after Hurley took out some of his rotation players, but by then it was too late.

Houston Baptist was no match for Arizona State's size and athleticism, leading to a predictably ugly road loss against a Top 25 team.

Arizona State regained its offensive mojo after the debacle against Villanova and picked up an easy win in its home opener against a team that won four games last season.

Arizona State will likely stay close to its No. 18 ranking in Monday's poll after winning two games and losing to No. 3 Villanova.

Arizona State guard Remy Martin had a nice bounce back after being shut down by Villanova.

The senior wasn’t much of a factor against the Wildcats, finishing with five points on 2-of-8 shooting. Martin was much more aggressive against Houston Baptist, scoring 16 points on 4-of-7 shooting with four assists.

Arizona State plays at California in its Pac-12 opener Thursday.