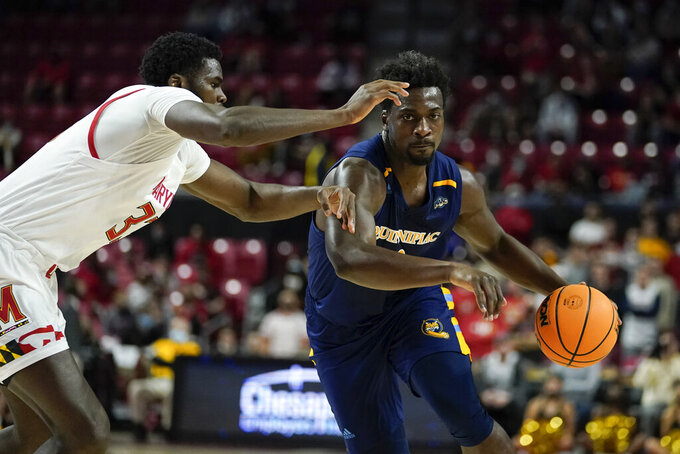 COLLEGE PARK, Md. (AP) — Eric Ayala reached his milestone, as expected. It just wasn't a big deal to him and his coach.

Ayala scored 13 points, surpassing 1,000 for his career, and No. 21 Maryland beat Quinnipiac 83-69 to start the season on Tuesday night. Ayala entered the game with 994 points and made a 3-pointer and a three-point play in the early minutes to reach 1,000.

“Somebody had told me in our exhibition I only needed a few points,” Ayala said. “I got into the game and I wasn’t even really thinking about it. We just kept playing. It happened in the game. I heard them announce it in the game, and then I was just trying to get to the next possession."

Ayala was Maryland's top scorer a season ago, so his milestone was pretty much a foregone conclusion when he needed only six points coming into the 2021-22 campaign.

Qudus Wahab added 17 points for the Terrapins, who led by 16 at halftime and never let Quinnipiac get closer than the final margin of 14. Maryland (1-0) won its 45th consecutive home opener and improved to 28-2 against current members of the Metro Atlantic Athletic Conference.

“Early on, I think the adrenaline was there, not playing in front of a crowd for a while, obviously playing on a stage in a Big Ten setting,” Quinnipiac coach Baker Dunleavy said. “So adrenaline probably got the better of us.”

The Terrapins opened the season with a mix of talented holdovers (Ayala and Donta Scott) and incoming transfers. Wahab, a 6-foot-11 transfer from Georgetown, went 7 of 10 from the field and contributed six rebounds. Fatts Russell, a 5-foot-11 transfer from Rhode Island, scored 12 points with four assists.

Wahab and Russell were both in the starting lineup.

“I think we have seven starters,” Turgeon said.

Quinnipiac (0-1) led only once in the game, after a 3-pointer by Williams put the Bobcats up 3-2. The Terps gradually pulled away as the half progressed. A dunk by Scott made it 35-15.

Quinnipiac: The Bobcats got leading scorer Jacob Rigoni back for a fifth year this season, but he was quiet offensively, scoring only seven points on 2-of-9 shooting. Quinnipiac was still able to recover from its poor start and outscored Maryland by two points in the second half.

Maryland: Chemistry is crucial this season for the Terps as they welcome key newcomers to the lineup. They didn't have too many problems in the opener, although they did end up with 13 turnovers, one more than the Bobcats. Maryland handled Quinnipiac on the boards 45-29 and held the Bobcats to 41% shooting from the field.

Wahab's size could give Maryland a different dimension this season.

“I think they're a pretty complete team,” Dunleavy said. “Last year they didn't have a true big, and they were probably missing an additional point guard. I feel like they've done an amazing job of filling in the roster.”

Kevin Marfo was the nation's leading rebounder for Quinnipiac two seasons ago. Then he transferred and played a season at Texas A&M.

Now he's back with the Bobcats. He had two points and nine rebounds Tuesday.

This version has been corrected to show Maryland’s lead reached 25 points in the second half.