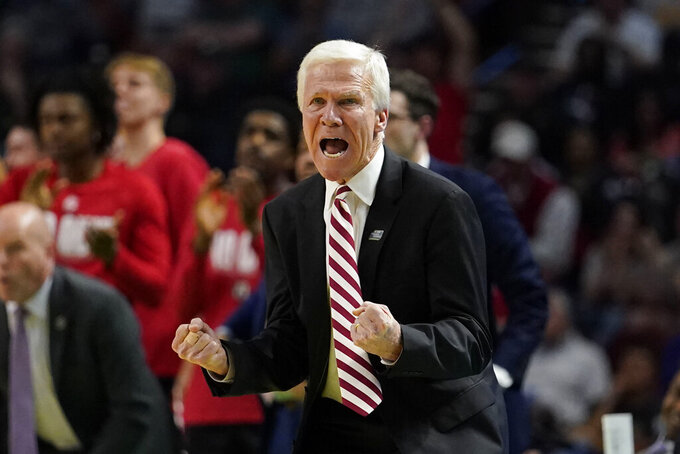 FILE - Davidson coach Bob McKillop yells during the second half of the team's college basketball game against Michigan State in the first round of the NCAA men's tournament Friday, March 18, 2022, in Greenville, S.C. Longtime Davidson coach Bob McKillop is retiring, ending a run that included coaching NBA star Stephen Curry with the Wildcats and ranking among the Division I men’s basketball’s winningest active coaches. McKillop announced his retirement Friday, June 17, 2022, at a campus news conference, effective at the end of the month. (AP Photo/Brynn Anderson, File)

It felt like a timely bit of reassurance for the longtime Davidson men's basketball coach as he prepared to announce his retirement.

“Everything happens for a reason,” McKillop said Friday as he choked up. “Did you see Steph after the game last night? He was crying, crying, tears. I thought that was a message to me: It’s OK to cry today.”

McKillop's 33-year run at the small private school of fewer than 2,000 students north of Charlotte, North Carolina, included coaching the eventual NBA star with the Wildcats before Curry became a household name. It also included becoming one of the most respected voices in Division I men’s basketball on the way to 634 wins and 10 trips to the NCAA Tournament.

He announced his retirement in a campus news conference for the end of this month to make way for his son, associate head coach and former Wildcats player Matt McKillop, to take over as his successor.

The retirement announcement came shortly after athletic director Chris Clunie said Davidson would make Curry’s No. 30 the first number retired by the school after he earned his degree this year – 13 years after he left school early for the pros and one day after Curry won his fourth title with Golden State while being named NBA Finals MVP.

Bob McKillop, 71, became the latest notable coaching figure to exit the game in a little more than a year, a list that includes retired Hall of Famers Roy Williams at North Carolina in April 2021 followed by Mike Krzyzewski at Duke and Jay Wright at Villanova after last season. Those departures come at a time of massive change to the sport, with wide-open player movement through the transfer portal and college athletes more broadly able to cash in on their fame through endorsement deals.

McKillop arrived on campus in 1989 out of the high school ranks and endured a four-win season in his debut year. But he eventually built a consistent winner with 17 seasons of at least 20 wins.

The highlight was a captivating run to the NCAA Elite Eight in 2008 behind Curry’s dazzling play that made him a national star before falling to eventual NCAA champion Kansas.

“Love you Coach!” Curry posted on Twitter. “Thank you for everything you’ve done for me, my family, Davidson and every person you’ve impacted along the way.”

The school named its court after McKillop in 2014. His final team won 27 games before losing a one-point game to Michigan State in the first round of the NCAA Tournament in March.

“This program is in a bright place right now," he said. "The current roster we have is exhilarated and energized and inspired to take the next step in our journey forward.”

As for Curry, Clunie said the school plans to pay tribute to the former All-American on Aug. 31 with a ceremony to honor his number retirement, induct Curry into the Davidson Athletics Hall of Fame and present him with his diploma in a “mini-graduation ceremony.”

“We are so blessed and graced to have had his presence here, and we still have his fingerprints all over us,” McKillop said of Curry. “We are very fortunate.”