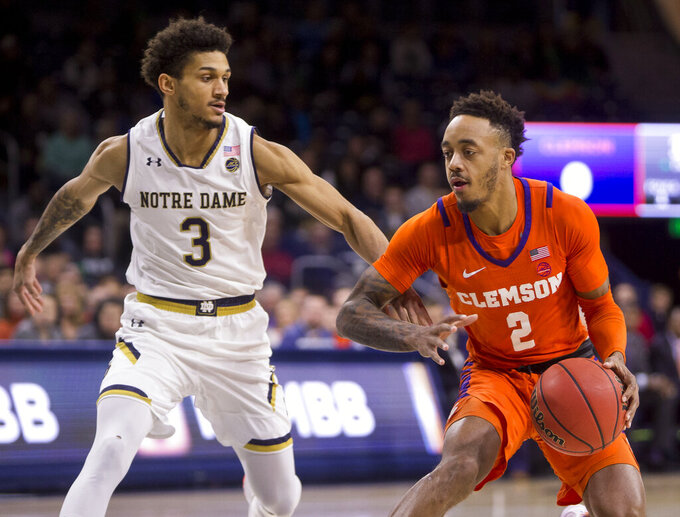 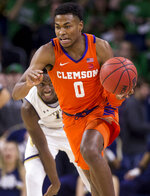 SOUTH BEND, Ind. (AP) — Clemson was overdue to be on the other side of a heartbreaker.

After standing 0-5 this season in games decided by two points or fewer, the Tigers finally broke through Wednesday night, holding on for a 64-62 victory over upset-minded Notre Dame.

Marcquise Reed scored 22 points and made a critical steal late for the winners.

Freshman Nate Laszewski missed the second of two free throws for the Fighting Irish with a chance to tie the game at 3.1 seconds to go, not that Clemson coach Brad Brownell felt too horrible for him.

"We've lost four one-possession games in the league in heart-breaking fashion, in almost any way you can think about it, so we've shown tremendous resiliency to keep fighting," Brownell said. "Those losses are tremendous gut punches, especially when you're battling to make the (NCAA) tournament."

Elijah Thomas powered for 14 points, eight rebounds and four blocked shots for the Tigers, doing the bulk of his damage in the second half. Shelton Mitchell added 11 points.

Reed picked off an Irish pass in the lane with 28 seconds to go, then made two free throws two seconds later for a 62-59 Clemson lead.

At 63-61, Laszewski squeezed into tight quarters to rebound a teammate's desperation air ball and got fouled.

He made the first attempt on a one-and-one, but Brownell called timeout before the second shot in an effort to ice the freshman.

"Just to throw him off, we did what we can," Brownell said, "Sometimes it works, sometimes it doesn't. It's a really hard (interruption) for the shooter. It happened to us last year at NC State."

After Laszewski's miss, Clyde Trapp made the first of two free throws with two seconds to go for the Tigers.

He missed the second, but Mooney's three-quarters shot as time expired landed just short of the front iron.

Clemson: Against the laboring Irish, this was a near-must win for the Tigers as they scramble to earn an NCAA Tournament bid. Clemson had lost four of its last six — albeit three of those four by a combined four points — and is just 1-7 this season against Top 25 teams. Games against Syracuse to close the regular season and a higher seed to open the ACC Tournament give the Tigers an opportunity to build on their credentials.

Notre Dame: With their loss, the Irish virtually assured themselves of not getting even an NIT bid this season. ND has only Pittsburgh left on its regular-season schedule. The Irish would need to win that game, then a stunning four more in the ACC Tournament to reach the championship round and stand a game over .500 at that point. While the NIT is not precluded from inviting sub-.500 teams, no team less than two games over .500 was extended an invite last season.

Brownell, a native of Evansville, Indiana, who also played within the state at DePauw University, won for the first time in four visits to South Bend as coach of the Tigers, and he had an even more familiar face to in-state fans alongside him.

Marty Simmons, a University of Evansville star after transferring from Indiana, was head coach at UE for 11 years before becoming a special assistant to Brownell this season.

"It's been really fun to have him on my bench this season," Brownell said of Simmons, "and just kind of help me a little bit, see things a little bit differently, and just to rekindle the strength of our friendship."

Mooney's double-double was his 13th of the season just in ACC games, the most by any player in league play since NBA superstar-to-be Tim Duncan notched 15 such games for Wake Forest in 1996-97.

"Johnny Mooney's unbelievable," Brey said. "He needs three months off when the season's over. I've never seen anything like this, what he's doing. It's just too bad we're not winning to highlight it more."

Mooney entered the night averaging 12.1 rebounds in league games, the most of any major-conference player in the nation.

D.J. Harvey, ND's No. 3 scorer on the season at 10.4 points per game, sat out due to a hamstring injury suffered Tuesday in practice.

Brey said Harvey may miss the team's next game as well.

Clemson: The Tigers host Syracuse on Saturday to close their regular season in advance of next week's ACC Tournament at Charlotte, North Carolina.

Notre Dame: The Irish visit Pittsburgh on Saturday for their regular-season finale.