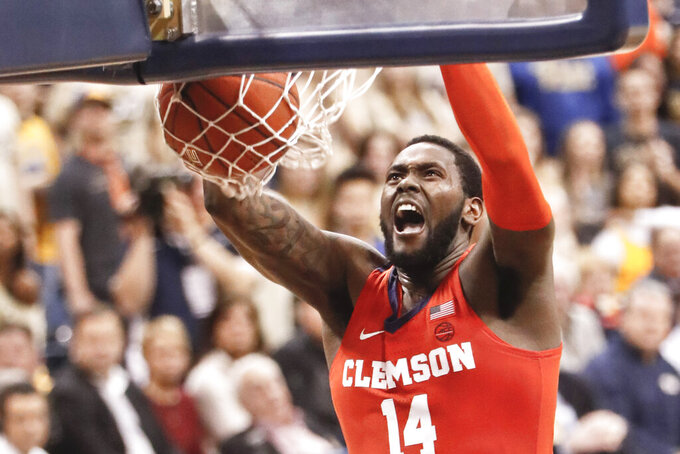 Clemson's Elijah Thomas (14) finishes off a dunk against Pittsburgh during the second half of an NCAA college basketball game, Wednesday, Feb. 27, 2019, in Pittsburgh. (AP Photo/Keith Srakocic) 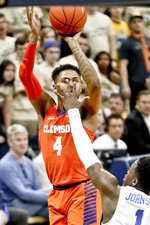 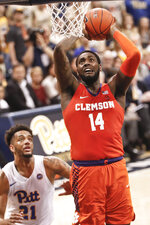 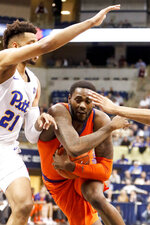 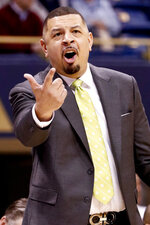 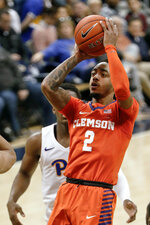 PITTSBURGH (AP) — The shot clock running down, Clemson's David Skara collected the ball and chucked it toward the basket. The ball smacked off the middle of the backboard and through the net for his team's fourth 3-pointer of a dizzying opening six minutes against Pittsburgh.

It was that kind of start for the Tigers. And an all-too familiar finish for the reeling Panthers.

Clemson hit each of its first five 3-pointers on its way to building a 22-point halftime lead then clamped down late for a 62-48 victory on Wednesday night. The Tigers (17-11, 7-8 Atlantic Coast Conference) held Pitt to just 27 percent (12 of 44) shooting while beating the Panthers for the sixth straight time.

"I thought our defense was really good all day," Clemson coach Brad Brownell said. "We competed (and) guarded them about as well as we could guard."

Xavier Johnson led Pitt (12-16, 2-13) with 14 points but the freshman guard also committed eight of his team's 13 turnovers. Terrell Brown scored 11 points for Pitt but the Panthers never led while dropping their 11th consecutive game. Not even a courtside appearance by three-time NFL Defensive Player of the Year Aaron Donald — a former Pitt football star now anchoring the middle of the defensive line for the Los Angeles Rams — could shake the Panthers out of a funk that stretches more than six weeks.

"We've lost a little bit of confidence," first-year Pitt head coach Jeff Capel said. "Losing will do that to you."

The Tigers are trying to work their way to the right side of the bubble in search for their second straight NCAA Tournament appearance. A misstep against the Panthers would have cost them dearly. Instead, they produced a near carbon-copy of their easy 13-point win over Pitt a month ago.

Shelton Mitchell hit a 3-pointer on the Tigers' first trip down the court. Reed added another on Clemson's second possession. Skara's off-balance heave boosted the advantage to 18-5. The 3-point streak ended with Aamir Simms missed a wide-open look from the corner, but he atoned by drilling one on Clemson's next possession and the Tigers just kept on rolling.

"They made so many shots early, we were dejected," Capel said. "When the kid banked a 3 at the end of the shot clock, you could see our guys' shoulders slump."

Pitt, giving away size at nearly every position, couldn't get anything going. The Panthers kept trying to dump it inside to Brown — who at 6-foot-10 is the team's lone post threat — but Brown couldn't seem to do anything with it. He missed all three of his shots, including a layup before the first-half buzzer that rolled of the rim, symbolic of an opening 20 minutes in which the Panthers made just five baskets against eight turnovers, scored a season-low 16 points and trailed by more than 20.

The Panthers, as they did in the first meeting with the Tigers, pushed back in the second half but it wasn't nearly enough.

Pitt drew within 10 points twice in the final eight minutes but got no closer.

"We're playing with a sense of urgency, trying to finish out the season strong," Reed said. "We've got big games at home coming up. Just want to keep taking care of business."

Clemson: The Tigers have done pretty well at beating the lesser teams in the ACC but probably could use another marquee name on its resume to go with an upset of No. 20 Virginia Tech earlier this month. Two opportunities remain in the regular season: on Saturday against No. 5 North Carolina and on March 9 against Syracuse.

Pitt: The Panthers have taken steps forward in Capel's first season, but the grind of the ACC has worn down his young and undersized roster.

Clemson: Will try to beat the Tar Heels at home for the second straight season on Saturday. The Tigers won 82-78 in last year's meeting at Littlejohn Coliseum.

Pitt: Visits No. 2 Virginia on Saturday.