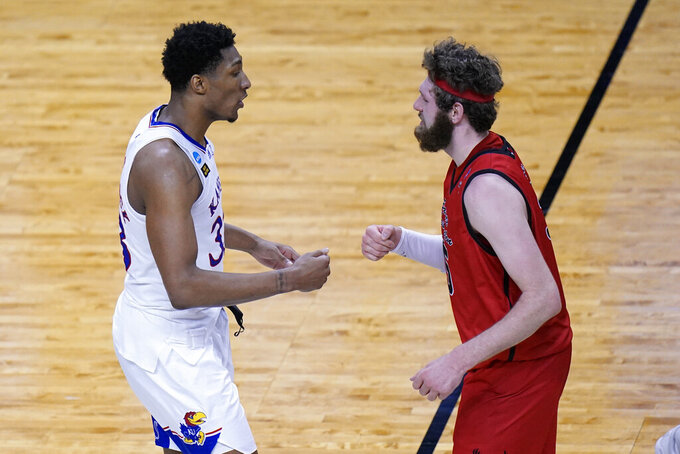 Jackie Moon never had it so good.

Will Ferrell's character in his 2008 basketball comedy “Semi-Pro” never got to play alongside his brother. Never got to go off for a career-high 35 points in the NCAA tournament against Kansas. Never got to live out a dream that played out countless times on the family driveway in Spokane, Washington.

Eastern Washington junior forward Tanner Groves appreciates and maybe even revels in the comparisons between himself, Moon and real-life Hall of Famer Bill Walton — and really, with headbands struggling to keep their shaggy curls at bay, the GIF-worthy comparisons flooded social media on Saturday afternoon — his feet remain firmly planted on the ground and his Pacific Northwest roots.

Groves and the 14th-seeded Big Sky champions hung tough with the with the third-seeded Jayhawks until the final minutes of a 93-84 loss on Saturday in the first round of the NCAA Tournament.

“It’s pretty crazy, pretty surreal I’m getting a lot of publicity for this,” Groves said after the loss. "But I’m just going to continue to be myself and continue to be humble and proud and grateful.”

And ever mindful of where he came from.

The 2021 Big Sky Most Valuable Player's evolution to inside/outside threat and one-day March Madness sensation began when he moved back home with his parents as the COVID-19 pandemic took hold.

There, Tanner, younger brother Jacob — who poured in 23 points against the Jayhawks — and youngest brother Dylynn spent days on end in the driveway. The oldest brothers were in constant competition while mom, dad and Dylnn chased down rebounds.

“I just put my head down and grinded all that I could,” Tanner said.

It showed. He averaged 16.4 and 8.1 rebounds while helping the Eagles to the Big Sky Conference title and the school's third-ever NCAA bid, heady territory for a program that plays in the considerable shadow of former mid-major darling turned national power Gonzaga, located about 20 minutes up the road from Cheney, Washington.

Yet there the Groves boys were against the Jayhawks, offering proof they very much belong. Tanner hit 11 of 18 shots, combining some old-school post moves with a deft 3-point touch. Jacob, a spindly 6-foot-7 with shock of curls of his own, finished with 23 points on 8 of 11 shooting.

Both drew raves and nods of approval from Self.

“I thought (Tanner) was great,” Self said. “I actually think his little brother, if you can call him that, to me, he’s about as good looking of prospect around. Six-foot-8, -9 or whatever, he can shoot, he can post, he’s got handles and vision. Those guys were very impressive to me. Both really good players.”

And they're not going anywhere. The entire starting five should return next season; Tanner Groves announced senior guard Jake Perry was going to come back.

It's welcome news for school at a crossroads. A report commissioned by the university's board of trustees on how to address a $5 million deficit in the athletic department outlined four potential options, two of which include reclassifying to Division II or Division III. Eastern Washington University interim president David May is expected to make a recommendation next month.

“We’re a tough university,” coach Shantay Legans said. "Everybody through and through is tough.... This time right now, we’re going through some tough times.”

And with the college basketball world watching, the Groves brothers and the rest of the Eagles provided a welcome ray of sunlight.

It'd make a pretty good movie. Turns out, reality is even better.

“From what I see, the ceiling is so high for us. It’s incredibly high,” Tanner Groves said. "We’ve got a ton of hoopers on the team.”