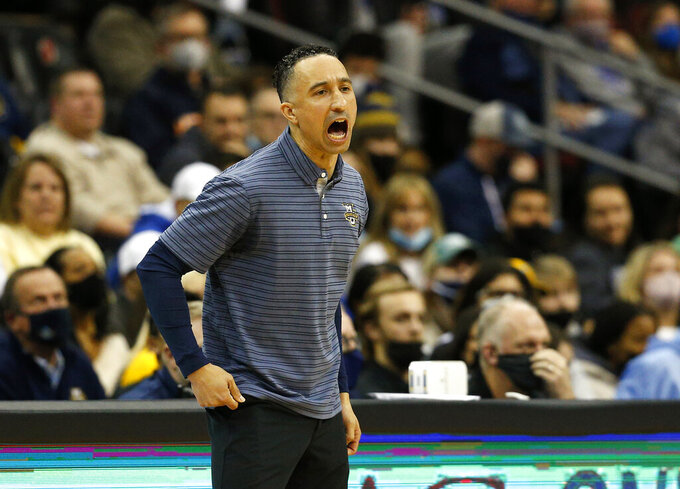 Lewis, a redshirt freshman coming off Big East Player of the Week honors, was averaging 15.8 points coming into the game for the Golden Eagles (15-6, 7-3 Big East), who have now won seven straight.

“Justin Lewis was phenomenal tonight. When you have a guy out there playing in that kind of rhythm it, you know, just makes everything go so much more smoothly,” Marquette coach Shaka Smart said. “The first half obviously was much better than the second half for us, but our guys did what we needed to do to finish the game.”

Lewis’ emphatic dunk on a pass from Stevie Mitchell made it 61-40 with 9:35 to play. Seton Hall made it closer after that, going on a 16-4 run to cut Marquette’s lead to single digits, and the Pirates got within six points twice in the final minute.

“Seton Hall deserves a lot of credit for how they just kept fighting and battling,” Smart said. ”We felt like the game was under control for us multiple times but they kept fighting, coming back even to the last minute.”

Olivier-Maxence Prosper, another freshman, was the only other Marquette player in double figures with 10 points.

The Golden Eagles are ascending under Smart, who led VCU to the Final Four in 2011.

“Obviously we’re just figuring it out. We’re figuring out what we need to do more and more each and every day,” Lewis said. “And Coach has been there before so he’s just letting us know daily and reminding us what we have to do to be a great team.”

Marquette: Picked to finish ninth of 11 teams in the Big East, the Golden Eagles look ready for their toughest slate yet. They are set to face three ranked teams in a row — at No. 17 Providence, home against No. 14 Villanova and at No. 20 UConn. Marquette already has beaten Providence and Villanova.

Seton Hall: After ascending as high as No. 15 in the AP Top 25, the Pirates have struggled recently, losing four of five. Bryce Aiken was averaging 19.5 points in Big East play before suffering a concussion at Marquette on Jan. 15, and the Pirates really need to get him back.

After cracking the rankings for the first time under Smart, the Golden Eagles will keep ascending as long as the winning streak keeps going.

Marquette: At Providence on Saturday.