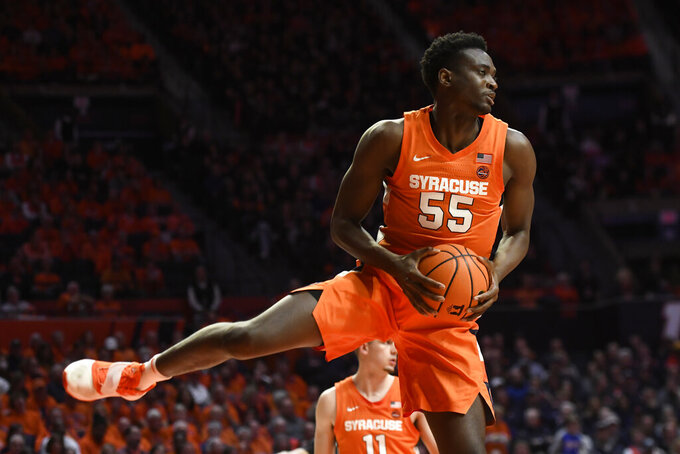 CHAMPAIGN, Ill. (AP) — Coleman Hawkins had 15 points, 10 rebounds and 10 assists for his first career triple-double, and No. 16 Illinois thumped Syracuse 73-44 in the ACC/Big Ten Challenge on Tuesday night.

Neither team shot well, but Illinois (6-1) hit six of its 15 3-point attempts in the second half to send the Orange (3-4) home with their third straight loss.

Terrence Shannon Jr. had 17 points on 5-of-17 shooting for the Illini. All of his makes were 3s. RJ Melendez scored 15 points.

Hawkins sent a lively crowd into a frenzy by securing his 10th rebound to complete the triple-double with 1:34 to go and Illinois up 68-44.

“I just kind of filled in the spots, found the gaps (in the zone)," Hawkins said. “I knew my teammates would be in certain spots. I was kind of just patient with it.”

Coach Brad Underwood said the triple-double — the fifth in Illinois history — was a credit to Hawkins' preference for creating opportunities for teammates.

“He would rather make a pass than a shot,” Underwood said. “And yet, he’s a very good shooter. He’s very unselfish that way.”

Syracuse collapsed in the final stretch, missing nine of its last 10 shots and failing to score in the final 3:19.

Benny Williams picked up two quick technical fouls in the final minute to become the second Orange player to get thrown out of a game this week. Mintz was ejected from a one-point loss to Bryant on Saturday.

Coach Jim Boeheim lamented his team's inability to generate offense, despite a strong defensive effort in the first half.

“We’ve got some young guys that are trying to figure out what they have to do, and they didn’t figure it out very well tonight,” Boeheim said. “We got a lesson.”

Illinois took a 30-23 lead into the half despite a 5-of-24 effort from 3-point range, partly thanks to eight points from Jayden Epps off the bench. Epps finished with 11 points.

Syracuse went scoreless for the last 4:55 of the first half after a dunk by Mounir Hima pulled the Orange within three points.

“A lot of really good players (here), a lot of great, great coaches, an administration who helped us survive early,” Underwood said. “I’m the beneficiary of that. I’m grateful.”

The sixth-year coach's 100-67 mark at Illinois has been boosted by recent success. The Illini are 73-28 since they had losing records in his first two years.

Syracuse: Boeheim’s team looks set to take some licks this season after arriving in Champaign off an overtime loss to St. John’s and a home defeat to Bryant. Still, there is plenty of time for the Orange’s young core — they start three underclassmen — to improve before Atlantic Coast Conference play begins in earnest.

Illinois: This wasn’t the Illini’s sharpest performance. But do-it-all playmakers Hawkins and Shannon give this team a strong floor, while talents like Melendez, Epps and Skyy Clark should have Underwood’s team in line to compete near the top of the Big Ten.

Illinois: Begins Big Ten play on Friday at No. 22 Maryland.