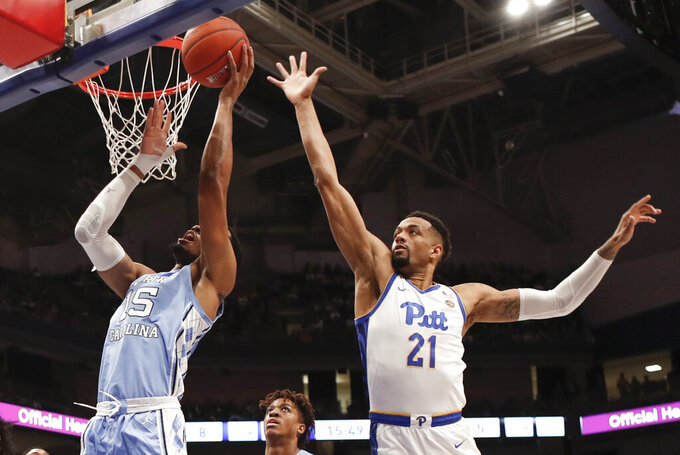 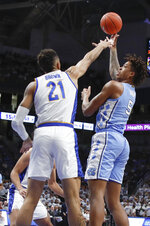 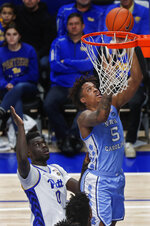 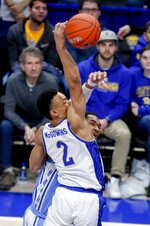 PITTSBURGH (AP) — Xavier Johnson could have chosen a cliche, something about how no one game is more important than any other. Instead, the Pittsburgh point guard went the other way.

Two years ago, the Panthers went winless in the Atlantic Coast Conference. On Saturday they completed their first-ever season sweep of North Carolina by using a dominant first half en route to a 66-52 victory. And while the reeling and injury ravaged Tar Heels are a bit of a mess at the moment, they're still one of college basketball's blue bloods. And Johnson knows it.

“It's big time,” Johnson said after scoring 20 points to go with six rebounds and six assists against just two turnovers. “It's rare.”

Maybe not this year.

North Carolina (8-9, 1-5) has dropped four straight and is just 2-6 without freshman star Cole Anthony, who is nearing the end of his rehab after undergoing knee surgery last month. Despite having a week to get ready, the Tar Heels fell behind by double digits before the game was 10 minutes old and never really recovered.

“It’s hard when someone is hitting you right between the eyes every time you step out there,” head coach Roy Williams said. “But life is like that, too.”

Williams remains stuck on 879 career wins, still tied with mentor Dean Smith for fourth all-time among men's Division I coaches. If North Carolina can't develop an offensive identity soon, Williams might have to wait a while before moving ahead of Smith. The Tar Heels committed 16 turnovers and shot just 32% (19 of 60) from the field.

Garrison Brooks led North Carolina with 16 points and 13 rebounds. Senior guard Brandon Robinson finished with 12 points in 32 minutes a week removed from sustaining minor injuries when the car he was in was struck by a car operated by an impaired driver. Yet two of the Tar Heels' most experienced players couldn't keep North Carolina from falling under .500 this late in the season for the first time since 2001-02.

Pitt's defense had something to do with it. The Panthers (12-6, 3-4) swarmed the Tar Heels from the opening tip, cutting off passing lanes and harassing North Carolina into a series of sloppy mistakes. Three times in the first half the Tar Heels were called for traveling, which Williams attributed Pitt's relentless and a raucous student section that surrounds the court at Petersen Events Center.

“We've got to be able to handle the heat in a crowd,” Williams said. “The turnovers early really set us back.”

So did Pitt's hot start. The Panthers needed a second-half surge to win in Chapel Hill on Jan. 8. One wasn't necessary in the rematch. Murphy hit a pair of 3-pointers during a 21-4 first-half burst that ended with three Johnson free throws that gave Pitt a 29-11 lead it never really came close to squandering.

It certainly looked like it for long stretches, though North Carolina also had trouble recognizing basic mismatches. One sequence early in the second half symbolized its frustrating afternoon. The 6-foot-9 Brooks found himself in the block being guarded by the 6-3 Johnson. Brooks raised his arms frantically to call for the ball. When it didn't come, Brooks stomped his feet and turned his back to the play as Robinson tried to drive the lane, only to be called for an offensive foul.

“Right now we've got to handle quite a bit of adversity,” Williams said. "It’s not pleasant. It’s not a good feeling after the game.”

North Carolina: Having Anthony in the lineup could go a long way to curing the Tar Heels' offensive troubles, but his presence alone might not be enough to shake North Carolina out of a funk that's seemingly appeared out of nowhere. Williams noted Anthony was 4 1/2 weeks removed from surgery but that the Tar Heels would not rush him back.

Pitt: The Panthers showed a dash of mental toughness after blowing a potential upset of No. 11 Louisville on Tuesday night, when the Cardinals escaped in overtime after a late offensive meltdown allowed Louisville to rally. Pitt was on the Tar Heels from the opening tip. At one point in the first half North Carolina had twice as many turnovers (8) than field goals (4). “Coach been talking about discipline a lot, us starting to mature,”Murphy said. “Conference games happen fast, you can’t dwell on the past.”

North Carolina: Travels to Virginia Tech on Wednesday. The Tar Heels were upset by the Hokies in their last trip to Blacksburg, Virginia, in 2018.

Pitt: Hosts Boston College on Wednesday. The Panthers have dropped each of their last two meetings with the Eagles.