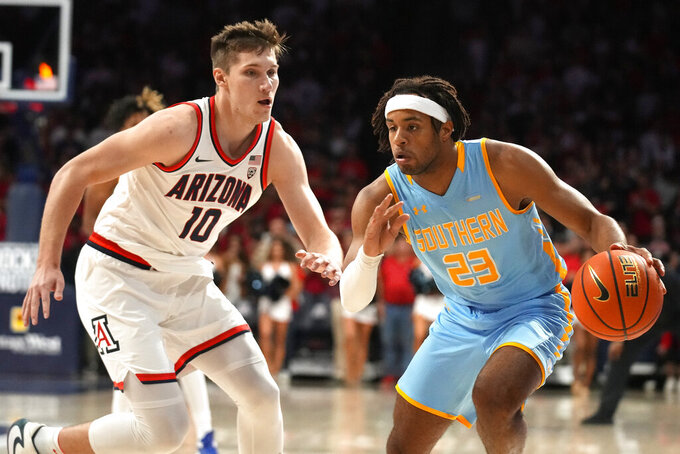 TUCSON, Ariz. (AP) — Kerr Kriisa had 14 points, 11 rebounds and 12 assists for his second career triple-double, leading No. 17 Arizona to a 95-78 win over Southern on Friday night in a game that featured 57 fouls, including three technicals.

Kriisa, the Wildcats' junior point guard, had his previous triple-double at Utah in February and is the only active player in Division I with two. He's the third player in school history to achieve the feat more than once, joining Andre Iguodala (three) and Loren Woods (two).

“I never play for stats, but triple-doubles are something special, especially in college,” Kriisa said. “I gotta give a lot of credit to my teammates, they made the baskets that I passed to them. I just got lucky today.”

It was the 11th triple-double in school history, and Kriisa's 12 assists were the most by an Arizona player since Mustafa Shakur had a dozen against Stanford in 2006.

Arizona built a 49-31 halftime lead by getting to the line early and often, making 17 of 25 free throws in the opening 20 minutes and going 30 of 46 for the game. Twelve first-half turnovers kept the Wildcats from having a bigger edge, and they finished with 19 turnovers after giving it away 24 times on Monday.

Southern picked up 12 steals but also committed 35 fouls to tie the McKale Center record for an opponent.

“Our press has got to be our best friend,” Southern coach Sean Woods said. “And we’ve got to do a better job of (not) negating our pressure and our hustle with fouls. We didn’t give up, our resiliency was there, we just dug ourselves into too big of a hole starting the first three minutes.”

Southern missed its first six shots, going scoreless until PJ Byrd banked in a long jumper with 16:19 left in the first half. The Tigers turned it over eight times in the first 8:21.

Byrd and Arizona’s Pelle Larsson were issued double technicals midway through the first half after a hard foul by Byrd on Kriisa.

Southern: The Jaguars fell to 0-7 against Pac-12 opponents. Their last win against a Power Five school came in 2015 at Mississippi State.

Southern: At Saint Mary's on Saturday. Southern’s first seven games are away from home.

Arizona: Host Utah Tech on Thursday, the Wildcats' final tuneup before heading to the Maui Invitational.