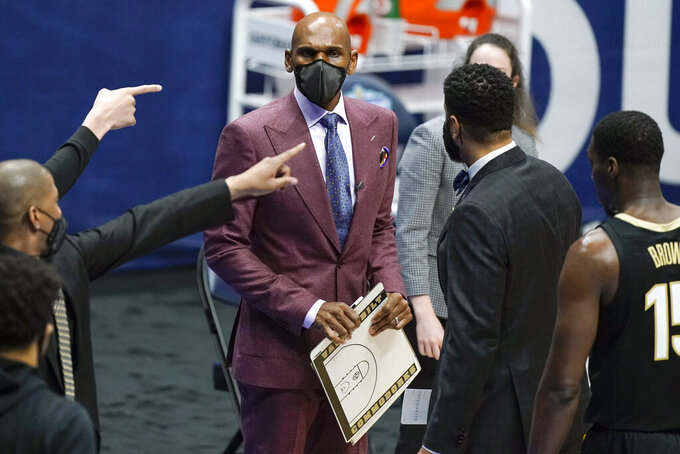 Vanderbilt head coach Jerry Stackhouse prepares to talk to his players during a timeout in the first half of an NCAA college basketball game against Florida in the Southeastern Conference Tournament Thursday, March 11, 2021, in Nashville, Tenn. (AP Photo/Mark Humphrey)

The fifth-seeded Gators (14-8) snapped a two-game skid coming into the tournament, and they will play No. 4 seed Tennessee on Friday for the second game between the teams in six days.

Noah Locke scored 13 points for Florida, and Tyree Appleby added 12 off the bench.

Vanderbilt (9-16) lost to Florida for the third time this season and sixth straight in this series.

Scotty Pippen Jr. led the Commodores with 23 points, making all 10 free throws. D.J. Harvey and Trey Thomas each had 12 points.

The Commodores, who won only three league games in the regular season, had their chances for a second SEC win within 24 hours.

Pippen pulled Vanderbilt within 64-63 with a pair of free throws with 1:40 left. But Mann hit a jumper with 53 seconds to go, and Thomas missed a 3 for Vandy with 31 seconds remaining as the Gators held on.

Florida appeared ready to cruise to a sixth straight win in this series up 34-22 at halftime after the Gators scored the final eight of the half.

Thomas keyed an 11-0 spurt with three consecutive 3s for Vanderbilt, the last giving the Commodores their first lead since the opening minutes at 55-54 with 8:39 remaining.

Florida: The SEC’s best shooting team made this game closer than it needed to be. The Gators went cold from the floor in the second half, missing five straight and going more than five minutes without a field goal. They did hold Vanderbilt without a field goal the final 4:05.

Vanderbilt: The Commodores missed Dylan Disu, the SEC's leading rebounder. He averaged 9.2 rebounds per game before having season-ending knee surgery on Feb. 26. They were outscored 34-18 in the paint and outrebounded 38-29.

Appleby and Scottie Lewis both were late to Florida's shootaround Thursday morning, according to the SEC Network, and both wound up on the bench to start the game. Appleby played seven minutes in the first half and Lewis just six.

Vanderbilt coach Jerry Stackhouse can get some more help for Pippen and Disu for his third season.