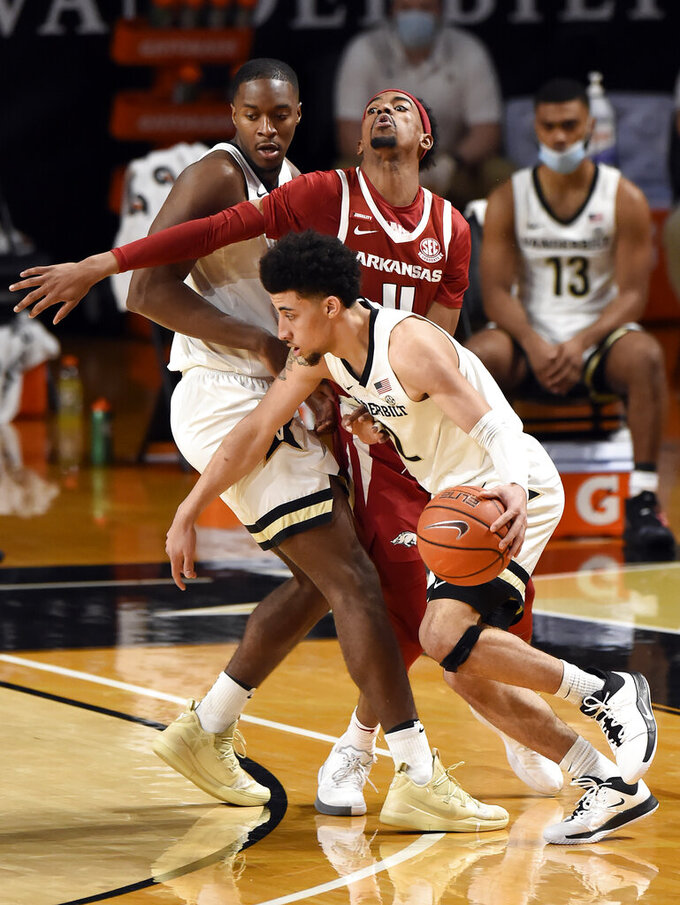 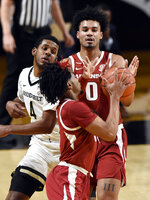 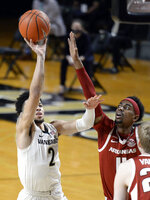 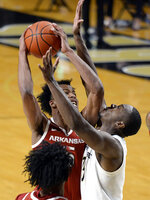 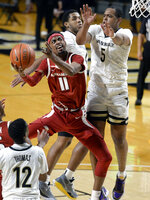 NASHVILLE (AP) — Moses Moody scored 26 points with eight rebounds Jalen Tate scored 25 and Arkansas led all the way in a 92-71 win over Vanderbilt on Saturday.

D.J. Harvey scored 16 points and Scotty Pippen Jr. scored 15 for Vanderbilt. Vanderbilt was without the services of sophomore Dylan Disu due to contact tracing for COVID-19.

Moody scored four points as Arkansas built a 9-0 lead in the first three minutes. The Razorbacks extended the lead to 18-8 before the Commodores scored seven straight to close within three. Ejike Obinna sank a pair of foul shots and threw down a dunk to narrow the deficit to 18-15 with 11:29 before halftime.

Vance Jackson's 3-pointer capped a 9-3 Arkansas run that put the Razorbacks up 40-30. Tate's 3 with a minute before the break made it 43-31, and Arkansas finished the half up 45-35. Justin Smith's layup with 14:54 remaining made it a 57-46 advantage and the Razorbacks led by double figures the rest of the way.

Arkansas had a 39-29 rebounding edge, in part a function of Disu's absence — the SEC's second-leading rebounder at 8.4 per game.

Disu and Pippen had been the only two Commodores to start every game this season while starting the last 24 games together. Disu had started 41 straight games. The only game he hadn’t started was the first game of his freshman year.

Vanderbilt returned to the court for the first time following the SEC canceling its Wednesday night game against Texas A&M due to not having enough players available.

The Razorbacks (12-4, 4-4 Southeastern Conference) have beaten Vanderbilt (4-7, 0-5) seven straight times and are 11-1 against the Commodores in their last 12 meetings.