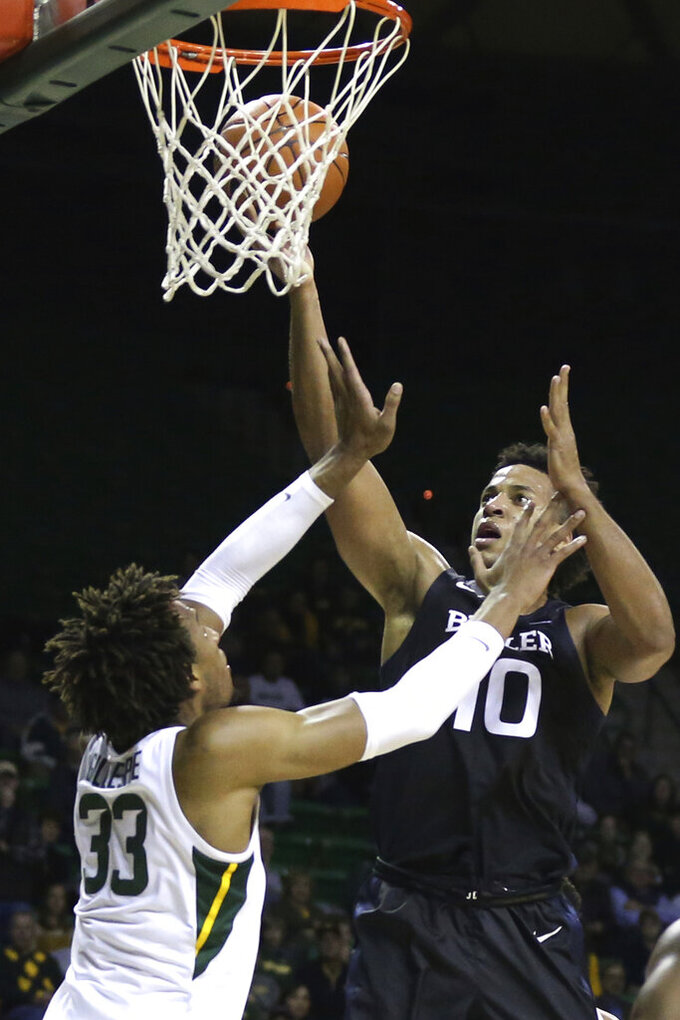 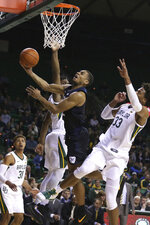 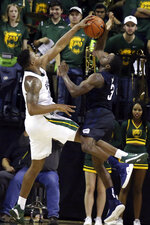 WACO, Texas (AP) — Mark Vital and his Baylor teammates now get to study for final exams. They have already passed a couple big tests on the court.

Vital blocked Kamar Baldwin's potential go-ahead shot with 1.5 seconds left and No. 11 Baylor won its second game in a row over a Top 25 opponent, holding on to beat previously undefeated No. 18 Butler 53-52 on Tuesday night.

“He did exactly what I was watching (on film), and Coach Drew trusts me to guard him, because I’ve been studying,” Vital said.

“And he’s going to study like this for finals, too, by the way," Baylor coach Scott Drew then said.

The Bulldogs never led, but had the ball after Aaron Thompson rebounded Davion Mitchell's missed shot before a timeout with 7.9 seconds left. After Baldwin inbounded the ball, he got it back and drove for a layup that was swatted away and out of bounds and last touched by the shooter.

“It was kind of clear out and get the best shot available, try to go downhill,” Baldwin said. “They stayed home and did a good job.”

Butler (9-1) was the third team to lose for the first time, after No. 1 Louisville and No. 4 Maryland lost earlier Tuesday night. That left five undefeated Division I teams.

After MaCio Teague missed a free throw for Baylor (8-1), the Bulldogs had 0.7 seconds left. A desperation shot by Baldwin, who finished with 19 points, wasn't close — and came after the buzzer anyway.

“That was an absolute battle. Just a high-level, competitive environment,” Butler coach LaVall Jordan said. “At the beginning of the game, they out-toughed us to start the game, and we were battling up hill. Proud of guys for fighting back.”

The Bulldogs also had a chance to take the lead with 41 seconds left when Baldwin was called for a charging foul drawn by Jared Butler.

“I had Christian David coming down the left side, and man, if I hit him with a bounce pass, we go up one, and then we come back and get a stop and it’s ballgame,” Baldwin said. “Got to make the easy play.”

Teague and Devonte Bandoo each had 10 points for Baylor, whose coach, Scott Drew, is a 1993 Butler graduate and faced his alma mater as a head coach for the first time.

Sean McDermott had 16 points, including four 3-pointers, for the Bulldogs. But he didn't take a shot in the final 12 minute after making 6-of-8 shots.

Butler, after trailing by 16 points in the first half, also had a chance to tie the game with 3:46 left after Baldwin — whose 15-footer had just gotten the Bulldogs within a basket — rebounded a missed 3 by Baylor. But Baldwin had his potential tying shot blocked by Mark Vital, who then scored on the other end to make it 53-49.

The Bulldogs had gotten within 44-40 midway through the second half after Baldwin's third consecutive basket came in a stretch when they made seven shots in a row.

Baylor built a 28-12 lead in the first half during a six-minute stretch when the Bulldogs missed eight shots in a row. That was the largest margin in the game before McDermott's 3 ended the Butler shooting drought. Baldwin's layup ended a 7-0 run that got the Bulldogs within 31-24 before Devonte Bandoo's 3 that gave the Bears a 34-24 halftime lead.

Butler: The Bulldogs were trying to get to 10-0 for the first time since 2006-07. They were still good defensively, having come in allowing only 56.2 points a game — and holding Baylor to under that.

Baylor: The Bears are one bad stretch from being undefeated. Their only loss was to Washington in the second game of the season in Alaska, when they had a 10-point lead before not making another field goal in the final five minutes.

This was the sixth of 10 games in the first season of a scheduling alliance between the Big 12 and Big East — both 10-team leagues. The Big East won four of the first five games last week. There are still four more games to play before Christmas: Kansas at Villanova; Oklahoma at Creighton; Xavier at TCU; and Providence at Texas.

After five games in a row against teams from major conferences, Butler is home Saturday against Southern University.

Baylor, which now has three wins over Top 25 teams, has only two more games in December. The Bears play UT-Martin on Dec. 18 in Houston, then are home against Jackson State on Dec. 30 in their last game before opening Big 12 play.