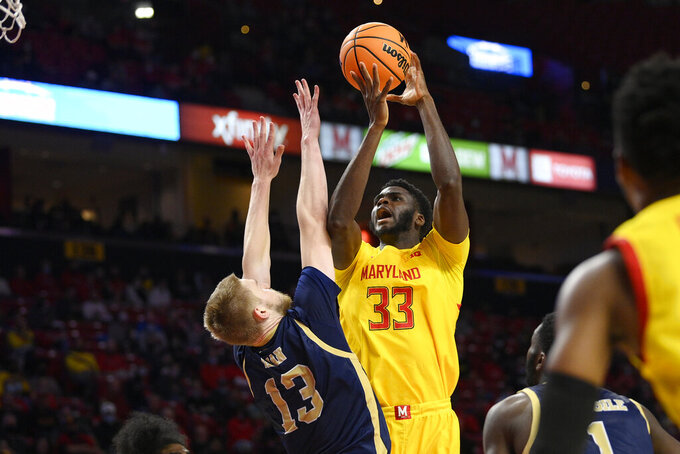 COLLEGE PARK, Md. (AP) — Maryland's shots repeatedly bounced off the rim. The Terrapins appeared a bit out of sync while running their offense, and the defense was often a step slow.

Coach Mark Turgeon knew there would be early-season games like this for his revamped team. Fortunately for the Terps, they won anyway.

Qudus Wahab had 18 points and 15 rebounds, Fatts Russell added 15 points and No. 21 Maryland bounced back from a lackluster first half to beat neighboring George Washington 71-64 Thursday night.

Wahab, 6-foot-11 transfer from Georgetown, kept the Terrapins (2-0) within striking distance before halftime and fueled an 8-0 run at the start of the second half that put Maryland ahead for good.

After the Terrapins let a 12-point lead dwindle to 66-64, Wahab made one of two free throws. He then blocked a shot on the other end and snagged the rebound of a potential game-tying 3 before Russell clinched it with a shot from beyond the arc.

“We have six new guys in our rotation. That's a lot to do,” Turgeon said. “The guys found a way to win. We made some mistakes that we'll learn from. We'll get better.”

Joe Bamisile scored 20 for the Colonials (1-1), including 16 in the first half. Maryland transfer Ricky Lindo Jr. had 13 points and nine rebounds in his return to the school where he played from 2018-20.

“The first half I wasn't happy with the shots,” Turgeon said. “I thought the second half we got a lot of really good looks.”

Maryland found its shooting touch at the outset of the second half. Hakim Hart and Russell made layups before Wahab sank two free throws and added a dunk for a seven-point lead.

After GW closed to 49-44, a layup by Wahab and two foul shots by Donta Scott upped the margin to nine points with 9 minutes to go. Minutes later, two foul shots by Hart and a three-point play by Russell made it 65-53.

But the Colonials came back.

“I’ve been around a lot of championship-level teams, teams that have a chance to play deep into March, and (we) have that quality to be able to rise to the occasion when it’s at the most dire need,” coach Jamion Christian said. “I’m really encouraged.”

Maryland won despite going 3 for 20 from beyond the arc.

It didn't matter, because Wahab dominated inside on both ends.

“I have a lot of respect for Turgeon. I think he’s one of the best,” Christian said. “When he’s got a big, he’s a different level coach. He loves having bigs. (Wahab) had a good night against us.”

The schools are located less than 20 miles apart, but this was the first meeting between the teams since 2013 and the first in College Park since 1979. The Terrapins are 37-31 in a series that began in 1913 with GW posting a 21-14 victory.

GW: With a little more balance, the Colonials just might be a contender in the Atlantic 10. The 1-2 punch of Bamisile and Lindo is formidable, but only two other players scored prior to the final 12 minutes.

Maryland: This game served as a painful reminder that the overhauled Terrapins will obviously need some time before becoming a cohesive unit. Fortunately, a rather soft schedule over the rest of this month should provide the transfers (Wahab, Russell, Xavier Green and others) an opportunity to grow together.

The Colonials travel across the country to face UC San Diego on Saturday night. The Tritons opened the season with an upset of host California.

Maryland hosts Vermont on Saturday night, the third of five straight home games for the Terps.